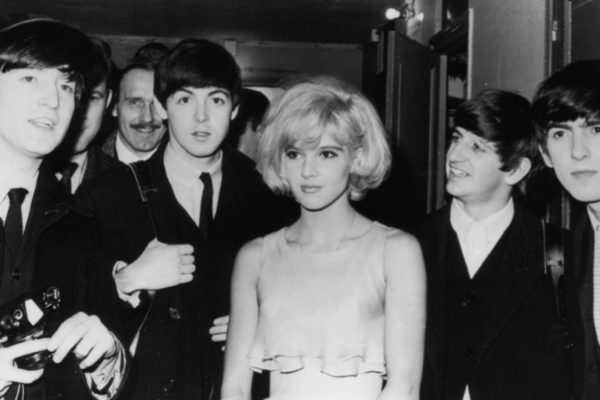 The Beatles were clever in their early days in the way that they provided a kind of wish fulfillment to their female fans. Songs like “From Me To You” and “I Want to Hold Your Hand” reached out to the audience members and allowed them to imagine that they alone were the ones whom the group was addressing with these sweet declarations of love. Every once in awhile, however, the Fab Four got a little more specific and gave the girl in the song a name. Here are ten of the most memorable of those occasions, in chronological order.

1. “Anna (Go To Him)” (1963)
On their first British album, 1963’s Please Please Me, The Beatles relied on a heavy dose of cover songs to supplement the Lennon/McCartney originals. Their taste was exquisite, as this track originally recorded by ace R&B songwriter Arthur Alexander proved to be an excellent showcase for John Lennon’s potent lead vocals and the expert harmonies of Paul McCartney and George Harrison. It’s one of the most memorable tracks on that wonderful debut album.

[amazon template=right aligned image&asin=B06X6MJGB7]2. “Michelle” (1965)
To this day, the only sentence that many Beatles fans can translate into French is “These are words that go together well,” thanks to this McCartney ballad. Paul used to fool around with the song at parties to impress girls. When it came time to put a track list together for Rubber Soul in 1965, Lennon remembered this tune and encouraged McCartney to flesh it out. The result is a liltingly lovely slow one with some of Paul’s most vulnerable vocals.

3. “Eleanor Rigby” (1966)
This is one of two major Beatles works (the other being “In My Life”) where Lennon’s and McCartney’s after-the-fact interviews disagree about the song’s authorship. In any case, this is one of the band’s finest moments, as McCartney sings behind a string octet about a spinster, a priest, and how their weary paths eventually intertwine. Loneliness has rarely been depicted so beautifully by any artist in any medium.

4. “Lovely Rita” (1967)
One of the traits that make Sgt. Pepper’s Lonely Hearts Club Band such an amazing album is the way The Beatles frame mundane tales of everyday life with transcendent music, rendering these tales somehow magical in the process. This tale of a shy suitor deigning to ask out a fetching meter maid certainly fits that template. McCartney provides a typically buoyant melody, but it’s the wild musical breakdown at the end of the song that lends this chaste date a hint of the surreal.

5. “Lady Madonna” (1968)
McCartney had already written an ode to moms everywhere on the 1967 sing-along “Your Mother Should Know.” This single digs a bit deeper because of the way it details the seemingly endless tasks this particular mother must perform over the course of a busy week, even as she finds time to admire her brood (“See how they run.”) McCartney’s Fats Domino-inspired piano attack produces a vibrant recording from start to finish.

6. “Dear Prudence” (1968)
The White Album was a particularly fertile time for Lennon and McCartney to write songs aimed at particular ladies. In this case, Prudence Farrow, sister of Mia, was the muse, as she had cocooned herself in her tent during The Beatles visit to India. Lennon turns this specific tale into a monumental recording with the help of McCartney and Harrison. Paul actually plays drums on the track, as Ringo Starr had gone on a brief holiday to escape tensions within the group.

7. “Martha My Dear” (1968)
Maybe, if your name is Martha, you get a kick out of hearing Paul sing your praises on this White Album track. You need to tap the brakes on that, because Macca was actually referring to a beloved sheepdog. (Short of saying “fetch” or “sit,” the lyrics make this relatively clear.) No matter to whom the song refers, this is an endearingly sprightly song with classical touches to the melody verses giving way to a rhythmically vibrant middle section.

8. “Julia” (1968)
The first of the two discs on The White Album ends with John’s haunting meditation on his deceased mother. Two outsiders deserve big assists on this track: Khalil Gibran, the poet whose words are borrowed by Lennon on some of the trippy lyrics, and Donovan, the British folk singer who joined The Beatles in India and taught them the fingerpicking technique used on this track. The rest is all Lennon and his piercing, yearning vocal.

9. “Sexy Sadie” (1968)
Harrison stopped Lennon from calling this White Album song “Maharishi,” but the Giggling Guru was definitely the intended target of this snide tribute. Lennon apparently became disillusioned at the end of the band’s trip to India and took his frustrations out in song. “You made a fool of everyone,” he exclaims in falsetto. Regardless of whether Lennon’s accusations were warranted, you can’t deny that this is a catchy little number that sticks with you long after the fadeout.

10. “Polythene Pam” (1969)
In the midst of the medley that makes up the entirety of Side Two on 1969’s Abbey Road, The Beatles unofficial swan song, comes this typically madcap John Lennon narrative. If you focus on the lyrics, you’ll hear him making sneaky references to the depraved sexual proclivities of the title character. But this track is nothing to be taken too seriously; better to just get caught up in the frenetic rush of the music and the warped fun Lennon seems to have singing it.

PS. To learn more about a very important girl in The Beatles’ life, check out our post on the documentary Good Ol’ Freda. Plus, you may also enjoy What Happened When The Beatles Did Covers? Beautiful Things!