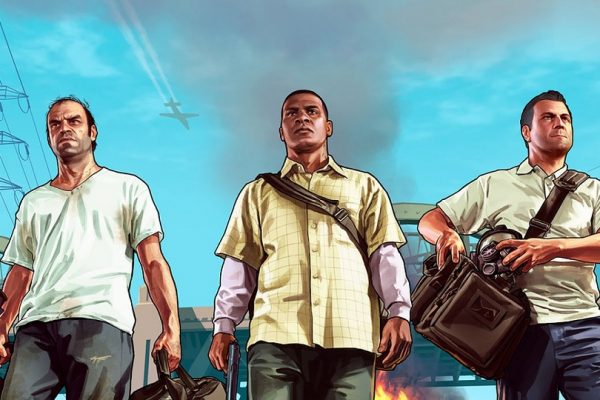 How do you pick the best five games from the last five years? Well, first you’d have to let go of not getting people pissed because their favorite isn’t included. The scene has so many genres and completely different gaming experiences at this point, not to mention all the various gaming communities. Admittedly, some only play Call of Duty (which this list does not include) while others favor smaller indie experiences (worthy of a whole other list!). But just like in movies, video games have their Hollywood popcorn summer blockbusters and their art house films, with dedicated followings for both. Regardless, I did my best to pull together what I think are the best games that came out since the ball dropped on 2012 and here they are.

Some would argue that this game has it all: superb storytelling, fantastic voice acting, possibly the most vibrant and active open world we’ve ever seen. Others just love a whole lot of murder. Either way, this game has proven to be one of the best selling games of all time having shipped over 65 million copies worldwide. Since one of this game’s major selling points is its wild, wonderful story, let’s break down the plot first. Michael Townley is a former bank robber now in witness protection. Through a series of unfortunate events, he ends up meeting with amateur career criminal Franklin and his completely deranged, old partner Trevor. Throughout the game, the trio commits a series of intricate bank heists and you must hire their crew. The soundtrack is incredible. The shooting and driving mechanics are solid fun. On top of that, the game has a thriving online element that’s still growing. Unbelievable!

Journey is so beautiful it would win an Oscar if the Academy awarded games. The quest here is completely wordless so you must garner info from environmental clues. Admittedly, Journey is the shortest game on this list clocking in at two to three hours of play-time but within that time frame, you will be awed. A particularly fantastic element is meeting travelers that look like you on your play-through. These end up being actual other real players who have shared your journey with you. (You see all of their gamer tags during the credits.) That brilliant touch encapsulates the very nature of the game: strangers traveling together through a vast and lovely world, unlikely to ever meet again. Frankly, this is a game that even non-gamers should try at some point.

Now we go from the shortest game to the longest. The Witcher 3 – with DLC included – maxes out around 200 hours if you take on all of the side quests, Gwynt card games, and treasure hunts. And why wouldn’t you? The creators definitely put a lot of care into every moment. No side quest is boring or without deeper meaning. Our protagonist, a witcher (monster hunter) by the name of Geralt, may be a little dull, but the world of wraiths, werewolves, corrupt kings, griffins, vampires, and mages that surround him is fascinating. Personally, my favorite aspect of this open world is how colorfully lush it is. Sure, you can be ripped apart by massive trolls in The Witcher 3, but you’ll be surrounded by pretty flowers in a vibrant green glen. I also want to mention the dev company that made this masterwork: CD Projekt Red. This company, based in Poland, has maintained an indie team feel despite growing tenfold because they truly listen to their fans to make the game better. There’s even a thank you note to the player for their support in the credit roll.  How sweet is that?

I may say some things that make no sense here, but stick with me. DOTA (Defense of the Ancients) 2 is a free-to-play multiplayer online battle arena (MOBA) created by Valve (who did the Half-Life and Portal series). Think of the experience as a more complicated chess played by two teams of five players who choose from over 115 characters in order to destroy the other team’s Ancient structure on the opposing end of the map. If that sounds like gobbledygook, don’t worry. All you need to know is the prize pool was $20,770,460 at this year’s International DOTA 2 tournament in Seattle. Video game competitions (a.k.a. eSports) are now making millionaires, and filling giant arenas. Did you know that at this very moment, at least 80,000 people are watching others play DOTA 2 on Twitch? Well, now you do. With that amount of dedicated players and fans, no “best of” list would be complete without DOTA 2.

The Last of Us

From Naughty Dog, the makers of Uncharted, another cinematic franchise, comes The Last of Us which has defied some pretty steep odds by reinventing the now much-played-out zombie genre. The game also ventures into a realm most games retreat from: namely the world of loss and despair. This game will make you cry. Not that it’s just a sobfest. There are fun stealth mechanics, bad-ass weaponry, and excellent skill tree and crafting systems as well. But what makes this game a classic are its complex protagonists Joel (VO superstar Troy Baker) and young Ellie (Ashley Johnson) whose post-apocalyptic travails occur years later when barely anyone’s left. Somber to say the least. Some segments – like the one in wintry woods with the cannibals – are incredibly tense; the conclusion is one-of-a-kind. A masterpiece of storytelling and character development, The Last of Us is The Walking Dead of gaming…but better.

1 comment on “Someone Had to Do It: Top 5 Video Games Of Past 5 Years”