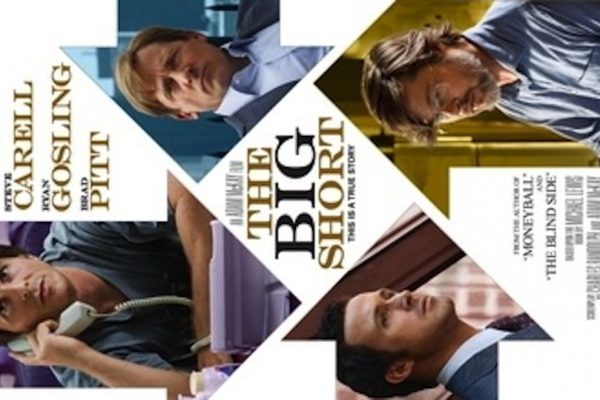 The Big Short won the Academy Award for Best Adapted Screenplay. That’s tremendously cool, and a well-earned honor for screenwriters Adam McKay and Charles Randolph. This film almost deserves a special Oscar for the studio executives who green-lit the production.

Imagine the pitch: “Okay, we’ve got a 300-page ultra-detailed nonfiction book that explains number for number what caused the Great Recession brought on by the real estate mortgage crisis that temporarily wiped out about half the value of equity in American homes and half the value of global stock trading in practically every segment of the market.

“Wait, wait, now it gets good! The protagonists—the guys who win—are quirky, real-life speculators who make an outrageous fortune betting against the economy of their own nation, and when they are proven right and the market collapses, they make an unconscionable amount of money when 99.5% of the population gets financially wiped out!

“Wait, wait—and they’re heroes because they saw it coming and no one would listen to them when they tried to tell a few important people that the collapse was inevitable, but since none of the important people would listen to them, after the crash they all go on to be celebrities who receive honorary degrees and big consulting fees from anyone who can get them to answer their phones.

“No, no, wait—and because this movie is an absolute downer and cannot possibly be construed as commercial in any mainstream way, let’s double down on the budget and get the biggest movie stars we can to play the quirky few who saw it coming and their equally surreal foils. I mean, really, really, really big names like Christian Bale, Brad Pitt, Ryan Gosling, Steve Carell, Marisa Tomei, Melissa Leo, Margot Robbie, and Selena Gomez. And I’m not saying get one of them or a few of them—GET ALL OF THEM! Hell, if we’re going out in style, let’s go crazy nuts wild freaky insane—this can be a way bigger disaster than Ishtar, Heaven’s Gate, The Lone Ranger, or John Carter. If it fails it’ll be a legendary bomb!”

[amazon template=left aligned image&asin=B0177ZM3LO]And you know what? The darn thing worked. It worked on every level. Gutsy, imaginative, informative, authentic, honest, funny, creepy, haunting, accusatory, indicting—a perfect motion picture for our time, for the movie lovers who maybe have had enough Marvel superheroes for a while, yet can’t quite push themselves to go to the theater and read translated subtitles.

The Big Short is a mainstream movie of immense intelligence, integrity, and craftsmanship. It’s the kind of movie like All The President’s Men and Silkwood that we just don’t see anymore. How about that? They put something thought-provoking with movie stars on the screen and we paid the price of admission! Maybe we were desperate for good dialogue, maybe we were desperate for an explanation of what happened, or maybe there still is a market for smart flicks that educate while they entertain without being preachy, polemic, or polarizing.

Credit the immense genius of Michael Lewis, forever one of my literary heroes, who wrote the brilliant book upon which the screenplay is based. Lewis has been knocking out spectacular investigative nonfiction in the style of narrative fiction since his debut almost three decades ago with Liar’s Poker. I don’t think Lewis is capable of writing a bad book. He’s that good! Maybe the studio execs rolled the dice because of the monster success of Lewis’s Moneyball and The Blind Side, two more incredibly unlikely adaptations for the screen that brought big ideas into the hearts and minds of popcorn lovers everywhere. We like to say all great drama begins on the page. Lewis proves it empirically, one platform removed, again and again and again.

[amazon template=right aligned image&asin=B0076XECLM]Lewis teaches, Lewis engages, Lewis forces us to think while never threatening us, embarrassing us, or chastising us. He sees real-life people as characters whose stories are on par with fiction because of the layering in their motivations. We see arcs in the lives of people we come to know for their strengths, weaknesses, curiosities, and aspirations. We grow as they grow. We fail as they fail. We are redeemed as they are redeemed. That is great storytelling in any form of media. In The Big Short, we celebrate the art of illumination—seeing what we all should have seen but only a few of us actually did. Now in hindsight we see it together, and with any luck we bond together to prevent the evil from returning.

The very act of successfully adapting this literary work to a visual medium is worthy of celebration—but wait, there’s more! We are also fond of saying “the eyes are the window to the soul.” When you watch The Big Short on the big screen for two or so hours, you see an unending array of eyes but almost no souls of any kind. That is very, very hard to do. We watch our speculators conniving in complex equations that will expose our undoing, and yet no matter how many times the camera grabs a close-up, all we see are lust, greed, ego, and hubris. How are actors capable of pulling off that detachment in shot after abstract shot, initially unedited, created out-of-order, and only theoretically connected by singular motivation to be correct? They are human, but beyond the bounds of humanity, except in knowing they haven’t done anything bad—they’ve simply taken the spoils of opportunism, milking something bad. That’s unique to film—seeing the eyes over and over again but not penetrating what isn’t there, until the ultimate redemption, when reality unlocks public pain in one full swing of the broadsword. Gasp.

Are we strong enough and knowledgeable enough to take action from a cautionary tale? Lewis thinks we are. I think so, too. I’m guessing a lot of moviegoers would agree, transformed as they were from the dark to the light, from confusion to enlightenment when the house lights came up and the real world welcomed their demand for reform.

This article originally appeared on The Good Men Project.

Photo Credit: Fair use image of The Big Short poster