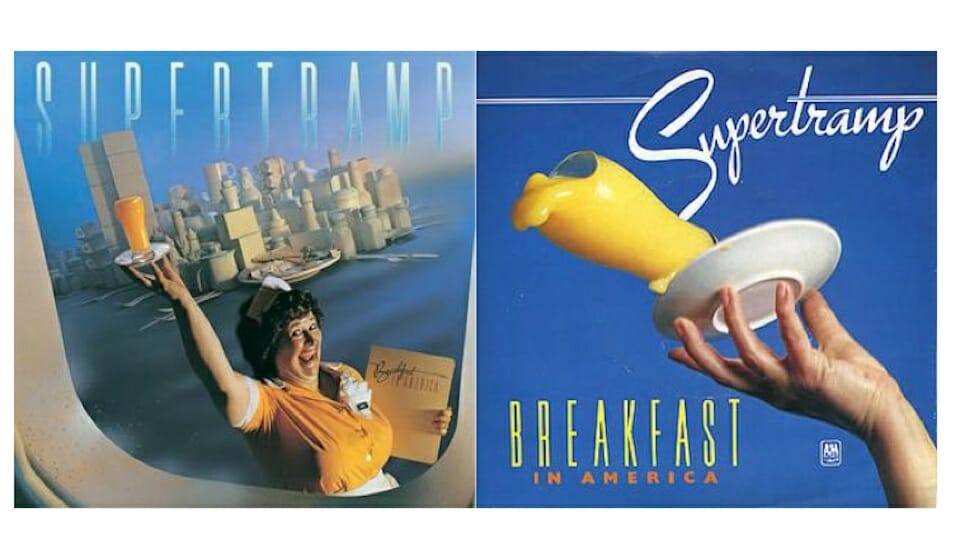 Some albums – many, actually – are released just at the right time and seem to define the era and the zeitgeist in which they’re released, focusing us once again on that timeless question: does life imitate art, or does art imitate life. In the case of Supertramp’s Breakfast in America album, I think it must be the latter: art imitates life. The album couldn’t have been released at a more perfect time for its lyrical and musical content. And there’s probably a few reasons why.

The British progressive rock band Supertramp released Breakfast in America in 1979. The album reflects Supertramp’s saturation in American pop and rock music and America’s crisis of confidence but never-give-up attitude…two things Supertramp documented and reflected as a partial result of the band moving to L.A. in 1977 and becoming more familiar with America.

Two things were happening at the time when the album was released in 1979: 1) America (for which the album is named) was seemingly in an end-of-the-empire mode, being fully embarrassed by astronomical unemployment and buried by high inflation and even higher gas prices, and 2) America was looking for something, anything, that could help us restore ourselves to the proud, soaring people we know we were.

In its own way, Breakfast in America helped restore our pride and even helped us chuckle and ponder at ourselves for all of our wonderfully exciting, self-absorbed trademarks and blemishes, from our educational system that preached categorical jargon rather than knowledge and sensitivity (“The Logical Song”), to our sexual revolution, which challenged traditional codes of behavior for both interpersonal and sexual relationships (“Goodbye Stranger”). In 1979, in America, safe sex meant having a padded headboard.

Allow me to provide a practical, real example of what I am describing: In June 1979, a few months after Breakfast in America had been released, the second single, “Goodbye Stranger” was released. The song, in my opinion, is about the freedom of one-night stands. (It reached number 15 in the USA charts and number six in Canada, but met with only limited success in England.)

One-night stands were about as common in America in 1979 as dollar bills, cars, and bean bag chairs. “Goodbye Stranger” was a musical tableau of the acceptance and prevalence of one-night stands in America at the time (“I’m an early morning lover, and I must be moving on, ooh yeah”), but also – more importantly – included one more extremely important element that returns us back to the need in America at the time for self-renewal and identifying ourselves once again as a “soaring” group of people, much like an eagle soars.

That element is the outro guitar solo in “Goodbye Stranger.”

Here’s my experience in finally fully becoming aware of the effect such a limited but unique sound could have in transforming the self-consciousness of an individual and, in some cases, a whole country.

In the summer of 1979, you couldn’t turn on any FM or AM radio station at the time without hearing, “Goodbye Stranger.” At that time, I was working as a waterbed delivery and set-up guy in Rockford, Illinois. Working with me were Charlie, a helluva guitar player and still is: Rick, a great drummer in a local band and I think still is; and Ryan, who was such a woman’s heartthrob, women would pay him to take their phone numbers.

Rick and I were in the waterbed warehouse one afternoon in the summer of ’79 stacking waterbed frames and “Goodbye Stranger” came on the radio. I heard its opening piano riff and Rick called out to me to come and listen to this song. “You gotta hear the guitar solo,” he said. “I know,” I answered, “there’s something about that solo.”

The solo played and Rick grabbed my arm, shook it and said, “Man, doesn’t that solo make you soar?” (His exact words.) “I know, dude,” I said. “Every time I listen to it I wish I was I was playing it in front of a filled auditorium. It makes me feel so good.”

“It’s just what this country needs right now,” Rick said. “A song that plays over and over on the radio that takes us to a higher ground from all this crap that’s going on in the country right now.”

Next day, we had bought the cassette of Breakfast in America and started each work day with “Goodbye Stranger.”

[amazon template=right aligned image&asin=B000007492]It was an incredible, signature, wah-wah, auditorium-sounding-engineered two-and-a-half-minute guitar solo, with flanges and phasers, that begins on note one – capturing the attention and the ear of the listener – and builds and builds and soars and soars in a way that actually makes the listener feel as though he or she is floating a few feet above the ground, pointed 30 degrees diagonally, and ready to take off like a rocket. The solo is, indeed, like the thrust of a rocket that lifts the hearts and souls and spirits of the listeners – and the country in which it gets the most airtime and turntable time. It was transformative. It was motivating in and of itself. It was just what we needed at the time in 1979.

Generally, one song, from one album, at one point in time, does not define an entire country’s mood, character, tenor or needs. And, to be sure, Breakfast in America was chock-filled with many other songs that reflected America’s culture and frame of mind in the late 1970s, from “The Logical Song” (“There are times when all the world’s asleep, the questions run too deep for such a simple man. Won’t you please, please tell me what we’ve learned, I know it sounds absurd, but please tell me who I am,”) to “Gone Hollywood” (“Ain’t nothin’ new in my life today, ain’t nothing true, it’s all gone away,”) to “Breakfast in America” (“I’m a winner, I’m a sinner, do you want my autograph? I’m a loser, what a joker, I’m playing my jokes upon you, while there’s nothing better to do,”) and more. These, to a lesser degree, also reflected the zeitgeist of America in 1979, but none better than, “Goodbye Stranger.”

Breakfast in America is a textbook-perfect album of post-Beatles, keyboard-centered English art rock that strikes the shrewdest possible balance between quasi-symphonic classicism and rock & roll. At that time, in 1979, Supertramp was the best-sounding art-rock band in existence and one of the most interesting.

If you dig rock ‘n’ roll, it’s highly recommended to know what this album is and understand its influence in America in the late 1970s and even early 1980s.

Photo Credit: Fair use images of the covers for both the album and title song for Breakfast in America.