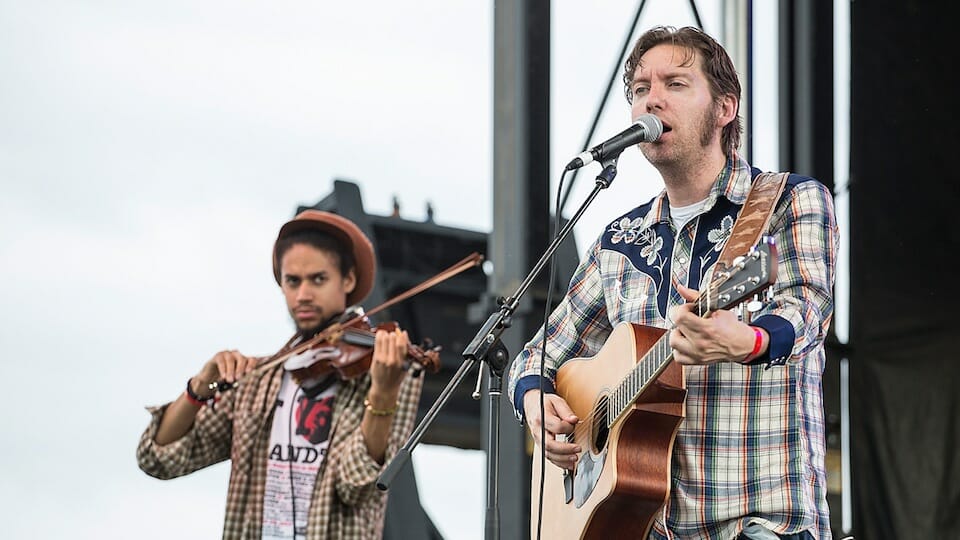 Fans of the FX series, Justified, already know its genre-splicing theme song by Gangstagrass featuring T.O.N.E-z, “Long Hard Times to Come.” Watching TV, you might mistake that for a one-off production piece from the mind of T-Bone Burnett, meant to evoke a roots-meets-urban, Southern-gothic-cop-show vibe. And that’s not so wrong. But there’s more going on here – including ten years of experimenting, recording and touring by Brooklyn-based producer Rench and his shifting cast of players – and it gets one thinking about the genre-mixing business.

I remember seeing Earl Scruggs at a bluegrass festival in 1971. His reputation as the king of the five-string banjo had long been established, and his fans were devout and legion. The 1971 festival was an early appearance of the Earl Scruggs Revue, which introduced next gen Scruggses and featured drums and bass guitar. The Scruggs legion wasn’t having any of it. To them, Earl Scruggs with drums was not only heresy but a capitulation in the culture war.

Looking back, I think the traditionalists were right. Not from a cultural point of view, but from a musical one. Earl Scruggs was a progressive in many admirable ways, but musically, this genre-blending was just off. The drum kit brought a level of rhythmic refinement and ornamentation that threw off the country beat. What could be more rhythmic than an upright bass, a Martin dreadnought, a banjo, a double-stopping fiddle, a mandolin, and five cowboy boots? Rock was born sneering at tradition, and both genres lost something when they met.

Gangstagrass, for all of its self-conscious shtick (Rappalachia must be the best mash-up album title ever) mixes two very authentic and surprisingly compatible American musical styles, each of which is easily anchored by a simple beat (think beatbox, washtub, footstomp), a simple song structure, and an authentic tale of hard living. Running from the law is a good conversation starter between the two genres. Infidelity works. Guns, oh yeah. Or if you’re Kool Keith, you spin a country-western fantasia that’s the best thing since Johnny Mercer’s “I’m an Old Cowhand (from the Rio Grande)”:

Genres, like crude oil, get refined over time and can lose the connection with the source of their power. Bluegrass itself was a refinement of traditional country music, and as bluegrass pickers became virtuosos and vocal arrangements were formalized, the music ran out of places to go. While still popular, the bluegrass catalog has become, like much mid-century jazz, the object of curators. Hip Hop is younger, of course, but it is inherently more friendly to experimentation and musical appropriation. Rench saw the novelty of combining these styles, but more than that, he saw their common-folk roots, the storytelling and the stomp. Gangstagrass doesn’t produce state-of-the art rapping or picking, but that absence of refinement is what leaves space for something new to happen.

Photo Credit: Musicians Adriel Williams (L) and Rench of Gangstagrass perform on stage during Day 1 of RedFest Austin at Austin360 Amphitheater on May 23, 2014 in Austin, Texas. (Photo by Rick Kern/WireImage)