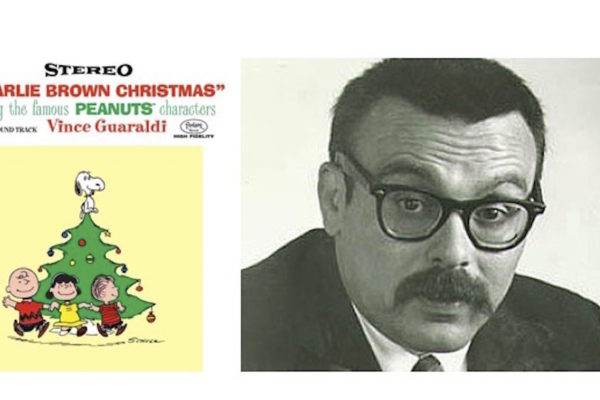 If one looks at any Peanuts comic strip, cartoon, or even an individual still, a melody will likely play in your head. It’s the bouncy theme, “Linus and Lucy,” although you’ll probably picture Schroeder bent studiously over his toy piano while Lucy looks on like some beatnik jazzbo. Charlie Brown and the rest of the gang dance with gleeful abandon; even Pig Pen is kicking up dust. You know this music… and you know you love it. But how did it come to pass? Charles Schultz is the man behind the visuals. But who’s the man behind the sound?

Vince Guaraldi was a local San Francisco/North Beach jazz legend, who was a veteran of Cal Tjader’s acclaimed 1950s acoustic band. By the end of the decade, Guaraldi began to immerse himself with the new Bossa Nova rhythms, and his work with Brazilian guitarist Bola Sete is still regarded as definitive for the genre. But Guaraldi had also done something almost all jazz musicians of the era hadn’t: he had a hit record on the radio. His exquisite 1962 album Jazz Impressions of Black Orpheus was on the charts, and a single, “Samba de Orpheus” was receiving a little local airplay. Then at some point DJs began playing the flip side, “Cast Your Fate to The Wind,” and it was that song that touched a nerve in the Kennedy era, combining a reflective, quiet melody, and a buoyant jazz swing in its midsection. Sophistication such as this had never really been on the radio before…and in an odd way, the song captured a melancholy that was the backdrop of the Cuban Missile Crisis of Autumn 1962.

By this time, of course, the Peanuts cartoon strip was a huge success, in mass-circulation throughout the Western world. Its creator, Charles Schultz, was by then working with television producer Lee Mendelson on a documentary of the strip and its characters. Mendelson heard “Cast” on his car radio, and realized that Guaraldi’s elegant jazz-funk hybrid was just what Peanuts needed. Work began on a soundtrack to A Boy Named Charlie Brown, which featured several Guaraldi tunes as well as some orchestrated pieces. But the documentary, while it looked great on paper, wasn’t able to get funding from advertisers. Come 1965, things changed as Time magazine featured the Peanuts crew on its cover. Calls between Coca-Cola and the “Mad Men” of the McCann-Erickson Agency led to a deal for a Christmas special.

A Charlie Brown Christmas is easily one of the greatest holiday evergreens in the history of the LP. its longevity, second to none — at least in the jazz world. How popular is it? Well, the only jazz album to sell more copies is Miles Davis’ Kind of Blue. So…. pretty popular. In short, all of the resulting reissues have been warranted, including the new version via Craft Recordings (which is frankly stupendous). This bright red LP replica-disc is a high-definition 24 bit/96Hz remaster housed in a handsome mini-LP sleeve (which even includes a reproduction of the original Fantasy Records inner sleeve and also uses the original artwork from the 1965 release). This record never sounded so good in digital format, and is highly recommended to Culture Sonar readers. “Christmas Time Is Here,” indeed.

0 comments on “Christmas Is Always Better With “Linus and Lucy””