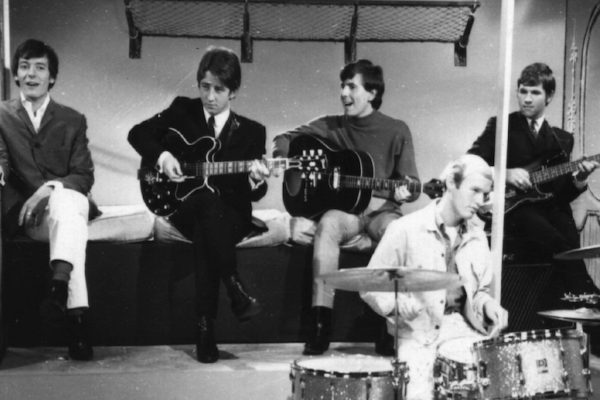 The Hollies may not be the best-known band of the British Invasion but they’re far from being “also-rans” and continue to tour to this day. And why not? With a career spanning well over 50 years, the band has chalked up a bevy of timeless hits like “Bus Stop,” “The Air That I Breathe,” “Long Cool Woman,” and “He Ain’t Heavy He’s My Brother.” As recently as 2006, they released a solid album of new music, Staying Power, followed by Then, Now and Always in 2009; but are The Hollies of today the same as The Hollies of yesterday? The answer is no. This group’s lineup has changed so many times you’ll be forgiven for not knowing the names of all 15+ players.

The group really started when co-founder Graham Nash (of Crosby, Stills & Nash) teamed up with Allan Clarke as the pseudo-brotherly duo Ricky and Dane Young. The two then joined The Deltas, a fellow group from Manchester, then renamed themselves The Hollies either as a tribute to Buddy Holly or in honor of a Christmas laurel depending on who you ask. But once rechristened, musical chairs were set in motion. Just prior to an audition with Parlophone’s Ron Richards, Steele was replaced by multi-instrumentalist Tony Hicks who helped drive the group’s debut single “(Ain’t That) Just Like Me” to number 25 and a subsequent cover of The Coasters’ “Searchin’” to twelve on the UK Singles Chart.

When Don Rathbone departed in 1957, Hicks recruited his old The Dolphins bandmate Bobby Elliot whose proto-punk drumming no doubt contributed to the speedy version the band then did of “Stay.” As to this particular lineup — Nash, Clarke, Rathbone, Elliot — the group remained intact for quite a few years (six to be exact). During this time, The Hollies cranked more cover songs aplenty. As cover bands go, they were hard to beat.

But The Hollies were hardly just imitators. The band’s nascent sound was truly unique and they were busy writing their own music while awaiting sign-off from their producer Richards. Their first original single — the funky “We’re Through” — made it all the way to number seven and even as more covers continued — the gorgeous “Yes I Will,” the chart-topper “I’m Alive” — it was another new tune, “Look Through Any Window,” that allowed them to crack the US Top 40 chart for the first time.

When bassist Eric Haydock took a sabbatical, Klaus Voorman stepped in for a few gigs while in the studio, the phenomenal Jack Bruce filled in on Burt Bacharach’s theme for After the Fox, an odd Peter Sellers movie, circa 1966. But it was another bassist entirely — fellow Dolphins’ alum Bernie Calvert — who subbed in for “Bus Stop,” their next Top Ten hit stateside that very same year. In fact, Calvert’s unique 12-string guitar riffing was so instrumental to the success of “Bus Stop” that the group kept Calvert on board until 1981. In short, Haydock’s sabbatical became permanent.

Notable singles followed like “Pay You Back With Interest,” “On a Carousel,” and “Carrie Anne.” Yet the band was fated for another reconfiguration when Elliot suffered appendicitis onstage which resulted in quite a few tour substitutes to keep the beat during live gigs and in the studio: Tony Mansfield, Dougie Wright, Tony Newman… Fueled by studio sessions with musicians Mitch Mitchell, Dougie Wright, and Clem Cattini , their next LP Evolution (1967) aspired to psychedelic grandeur but ended up overshadowed by a same-day release of Sgt. Pepper’s Lonely Hearts Club Band. Tunes like Graham Nash’s “King Midas In Reverse” as well as the trippy LP Butterfly further suggested the band had lost its way.

The Hollies clearly sensed this themselves. So what did they do? They went back to their roots: covers. This time, Bob Dylan. Nash, who was less enthused about the decision, exited to greater fame. Yet The Hollies continued as Terry Sylvester of The Escorts took over lead vocals and guitar. If their covers of rock’s Nobel Laureate didn’t translate as effectively as those by The Byrds, Sylvester nevertheless earned a place with the band with which he stayed for 13 years.

With Nash gone, the group reverted to outside songwriters which resulted in four consecutive UK hits over the next two years including “Sorry, Suzanne” and “He Ain’t Heavy, He’s My Brother” (with a young Elton John on piano). Even so by 1971, Clarke, one of the originators, began to clash about the material with Richards and left for a solo career and one unforgettable hit “Long Cool Woman in a Black Dress.” Undiscouraged, The Hollies forged on with Swedish singer Mikael Rickfors (of Bamboo) with whom they found some success via “The Baby” and “The Long Dark Road.” The taut three-part harmonies were there, but with Rickfors’ distinctly lower tone, the classic Hollies sound felt almost new again. In short, it was enough success to attract Clarke back and send Rickfors packing.

Clarke’s return was the catalyst of the group’s last US hit: “The Air That I Breathe” (1974), written by Albert Hammond and Mike Hazlewood (“To All the Girls I’ve Loved Before”). After that, the band simply never charted again. not with Bruce Springsteen’s “4th of July, Asbury Park,” not with the harder-edged “Daddy Don’t Mind,” and certainly not with the disco song “Wiggle that Wotsit.” In 1981, Calvert and Sylvester departed with the greatest resurgence of interest happening when a UK beer commercial used “He Ain’t Heavy, He’s My Brother” in 1988. Allan Clarke retired from the band in 2000, replaced by Carle Wayne, who died in 2003 and was replaced by Peter Howarth. Alan Coates left the band and was replaced by Steve Lauri. None of which should diminish our appreciation. In 2010, Allan Clarke, Graham Nash, Tony Hicks, Eric Haydock, Bobby Elliott, Bernie Calvert, and Terry Sylvester were all inducted into the Rock and Roll Hall of Fame. And deservedly so. They’re no George, Paul, John, and Ringo but they were pretty damned good for a long while.

PS. Another under-appreciated band to check out….and since the Hollies did so many covers in their career, our look at some other great cover songs.

5 comments on “The Hollies: Talent, Turmoil and Tenacity”