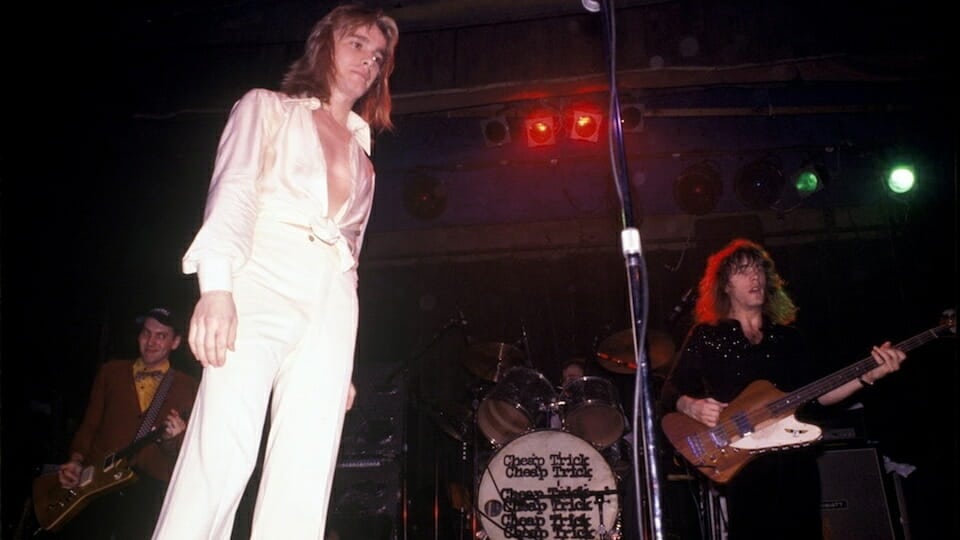 It was a long road from Budokan to Cleveland when Cheap Trick was finally inducted into the Rock and Roll Hall of Fame, but that’s nothing new for guitarist and front-man Rick Nielsen. Looking back at the frenzy surrounding the event, Nielsen recalled, “My wife and I, we flew to London, then I flew back to do three shows. Turn around, go back to London with my best friend Karl Sydow, to Italy, to London, to Chicago, down to Nashville and then home (in Los Angeles). I didn’t sleep for a couple days and my phone just kept ringing!”

While the Hall of Fame nod was a long time coming for Nielsen; lead singer and rhythm guitarist Robin Zander; bass player Tom Petersson; and original drummer Bun E. Carlos, the veteran guitarist says he wouldn’t trade in the life on the road for anything. “We just always worked,” Nielsen said. “We weren’t ever around to watch those (Hall of Fame induction) shows. We played with all those people but we never had time to really watch what all those shows were about.”

He says the recognition of their fans was always more important to the group than any plaque could be.

“When we started, there were some awards – the American Music Awards and stuff – but we would just play. Our award was just being included.”

Before joining the Hall of Fame, Nielsen says the band’s greatest thrill was sharing the stage with another rock and roll legend.

“Our biggest treat was meeting Dick Clark, and he knew all of us!” he said.

“He called us at the last minute to fill a show. Just, ‘Hey Rick. Hey Tom. Hey Bun.’ He was just going right down the line talking to all of us, and then out of nowhere, ‘And f*ck Cher for leaving me hanging!’

Nielsen looks back on his early days in Rockford, Illinois as being transformative in developing his music style, including seeing one guitarist, and now fellow Hall of Famer, in particular.

“My favorite player, bar none, is Jeff Beck,” he says. “I saw him at the old Rock River Roller Rink on the way down to Byron, saw him with The Yardbirds back in 1968. It was just incredible.”

He says Beck’s style and command of the stage influenced his own act in years to come.

“I flew to Cleveland once in high school to see the Jeff Beck Group at a show that must’ve had all of 20 people there,” Nielsen recalls. “You had him, Ronnie Wood, Dave Ambrose, Micky Walter, and Rod Stewart of course on the mic. And Jeff was just incredible. I was such a fan; he was the ultimate player. Still, to this day, he creams everyone else.”

Cheap Trick’s meteoric rise through the ’70s rock scene can be traced to a voyage to Japan. Their iconic live album Cheap Trick at Budokan propelled the band from regional act to international headliner almost overnight.

“We never expected it,” says Nielsen. “We played some club in Iowa, I don’t even remember. There were maybe 50 people there. The next day we flew to Japan and there were 5,000 people screaming for us when we landed. It was like, ‘Whoa! I love this place!’”

The change back home was astonishing, Nielsen said, with the latent American rock press finally coming to recognize the band.

“There wasn’t a lot of coverage,” he recalls. “I mean, you had Rolling Stone and some local trade mags, but that was about it. When I was in high school I used to get Melody Maker airmailed over to me (from the U.K.). It was about $125 a year for that, but I did it because I didn’t want to wait six weeks to know what was happening; I wanted to know now.

“And after Budokan, we were suddenly part of all that, that whole scene. Our records took off and everything just seemed to travel faster.”

Another tipping point on the global scene of the band’s career was 1986’s Theatre of Pain tour with Mötley Crüe, which saw the band highlight in the U.K.

“We never were really big there, so that tour was good,” he said. “We played well I thought. And we did quite well, we finally got in over there.

“The fact we got there with Crüe was just bigger and badder. Those guys, it’s like being on Howard Stern: the minute the light goes on it just all goes off. I remember asking Nikki (Sixx) if it’d be all right if we could just do some regular drugs for a minute! It was non-stop!”

Despite working and touring for 40 years, Nielsen says there are still some projects that never really came to fruition.

“We’ve done a lot of stuff like that. We all do if you do this long enough.”

He recalled one project with an icon of rock that was lost for years before finally finding airtime, a wait he says was a lot like waiting for the phone call he got Thursday morning.

“Bun and I went to work with John Lennon,” he says. “It didn’t come out for about 18 years after we did it. It was just lost.”

The Rockford pair cut a version of “I’m Losing You” and worked on Yoko Ono’s “I’m Moving On” with the late Beatles’ frontman in 1980 just months before his death.

“It’s like this Hall of Fame, you know? We can’t influence that, we can’t control what goes on around us. We just have to keep working.”

Yet another project with a former Beatle never made it off the ground, Nielsen says.

“At one point, I was asked to produce for Ringo. I was supposed to do a Side – Side 1 or Side 2, I don’t remember – and David Bowie was going to do the other. But that just never happened,” he lamented. “It’s tough when you’re on the road all the time.”

Daxx, Nielsen’s son, replaced Carlos as the band’s touring drummer in 2010; but Nielsen welcomed Carlos’ one-night return for the induction ceremony, noting “Bun’s always welcome. He was our bandmate. He’s our legacy.”

Nielsen credits the hard work of the band’s loyal fans with seeing the band finally inducted into the Hall after being eligible since 2002.

“There were people carrying around petitions, getting thousands of names on them,” he says. “Maybe we would’ve gotten in anyway, but our fans really helped out. That was just extra – people going the extra mile. What it meant to us, the awareness of it, it was incredible. People actually like our band and like us after all these years.”

The group’s first album of new material since 2009, released in April, happily coincided with all the Hall of Fame activity. “If we didn’t get in we’d be putting it out anyhow. It’s an honor but the world wasn’t going to stop if it didn’t happen.”

He says despite the wear and tear of all the years and stages played and miles traveled, Cheap Trick doesn’t plan on stopping anytime soon.

“I feel great until I look at myself,” remarked Nielsen. “I was never good looking, but I never looked that bad.

“But I’m lucky, we all have been. You don’t forget that. You never do.”

0 comments on “Cheap Trick: From Budokan to The Hall of Fame”