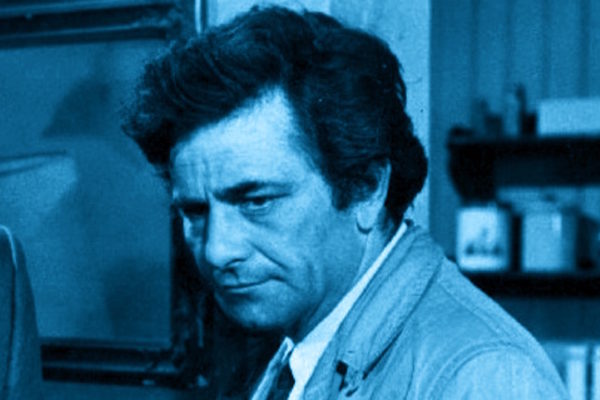 Detective and crime-solving shows have been well represented on TV ever since its inception. The blend of human drama, mystery, and complicated heroes remains a crowd-pleasing formula. But there is one show that, we submit, is the finest of that genre, and that is Columbo. The late Peter Falk played the titular detective to perfection with endearing idiosyncrasies, an omnipresent rumpled raincoat, an out-to-sea demeanor, and a delicious “New Yawk” accent that was a cool counterpoint to the suave villains he seamlessly brought down in posh 1970s Los Angeles. Columbo had a lengthy run — off and on for 35 years. But where to begin? Here is our personal top ten list. Rumple your hair, don your nonessential slicker, puff on a big ol’ cigar… and enjoy.

10. Season 4, Episode 26: “An Exercise in Fatality” (1974)
Robert Conrad plays the vain, icy-eyed owner of a trendy health club in chilling maestro fashion. He murders one of his franchise owners who threatens to divulge his financial misdeeds. Conrad fully believes he is savvier than Columbo, who gets winded during a brief jog on the beach but takes his muscle-bound adversary down with unruffled genius. Filled with amusingly dated electronics and a cast of sartorial splendors, this is an episode that satisfies.

8. Season 4, Episode 27: “Negative Reaction” (1974)
Lovable, rubber-faced Dick Van Dyke turns in a stellar performance against type as a calculating, cold photographer who murders his shrew of a wife, then takes an innocent man down during the cover-up. A great shutterbug, perhaps, but apparently unable to read a flipped negative. As “Paul Galesko,” he treats Columbo with ever-increasing disdain which makes his eventual capture a shivery fist pump of delight.

7. Season 5, Episode 36: “Now You See Him” (1976)
Fans generally view Jack Cassidy as the ultimate Columbo villain. Charming, unflappable, evil, his character here was a seasoned scoundrel and professional escape artist (“The Great Santini”) who contrasted deliciously against Columbo’s messy mensch-iness. This episode is a crisp and vibey piece of TV with a bit of a creep factor: Cassidy’s character engages in frequent fire-play (the actor himself was tragically burned to death at home not long thereafter).

6. Season 1, Episode 6: “Suitable for Framing” (1971)
Under-sung character actor Ross Martin plays an oily art critic with attitude, a man who kills his uncle in order to inherit his stunning art collection, then tries to frame his addled, loving auntie for the crime. Don Ameche and Kim Hunter shine in their guest turns, and the quiet contentiousness between Columbo and the art critic is something to behold. The final mute freeze-frame also contains a golden “gotcha” moment. (Fun fact: Martin was Peter Falk’s summer camp counselor decades earlier!)

5. Season 5, Episode 32: “Forgotten Lady” (1975)
A shattering episode which features an unusual dilemma. Janet Leigh plays an aging actress (some of her actual Hollywood footage is cleverly worked into the plot) who offs her husband in a desperate move to try for a never-to-be comeback. In the process, dementia claims her memory and causes Columbo to look for an honorable, unique way to solve the murder and bring closure to a heart-wrenching situation.

4. Season 1, Episode 4: “Death Lends a Hand” (1971)
Robert Culp was another repeat villain – stonily elegant, short on temper, and a worthy foil for our great lieutenant. Though his homicidal act is accidental, he’s got zero compassion, so his take-down elicits rowdy applause. Ray Milland is a standout as the devoted widower of the murdered woman. His interactions with Columbo are impeccable – two seemingly very different gentlemen with a sweet human connection.

3. Season 3, Episode 25: “A Friend in Deed” (1974)
Richard Kiley plays a particularly steely villain who, in a compelling twist, is Columbo’s boss at the LAPD. He assists in the cover-up of a faithless friend’s wife, then demands his pal’s help when he kills his own hapless spouse. There’s a great gritty ensemble, lots of gallows humor, and an enjoyable peek into Columbo’s workplace. It gets top marks for overall quality, especially its bravura final scene.

2. Season 3, Episode 19: “Any Old Port in a Storm” (1973)
A classic, this episode features Donald Pleasence as “Adrian Carsini,” a diffident wine connoisseur whose business is being ruined by his lack of money acumen and threatened by a brother planning to liquidate the family business. The stunning part isn’t the murder here, it’s the mutual fondness between the perp and Columbo. Though their lifestyles could not be more different, the two men bond through their fierce commitment to mastery in their chosen fields. Lots of funky ‘70s footage and surprising warmth to counter-balance the tragedy.

1. Season 1 Episode 3: “Murder by the Book” (1971)
This pilot of the series (aired after two earlier TV-movies provided fine proof of concept) proved a smashing start. Gorgeously directed and loaded with heart-quickening detail, Cassidy is the public face of a famous writing team, infuriated when his gifted partner (Martin Milner) wants to end their association. With an appealing supporting cast and a delightful reveal of Columbo as the insightful goofy hero that he is, this episode set the tone for all the glory which followed. Oh, and just one more thing: “Murder by the Book” is directed by a 24-year-old Steven Spielberg.

Columbo can be currently viewed on the Hallmark Movies & Mysteries Channel on Fridays at 9am.

1 comment on “From the TV Archives: Columbo’s Finest Moments”