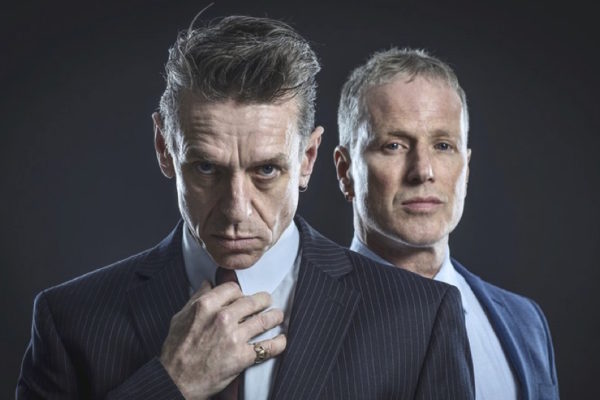 Back in 2000, when nu metal, boy bands, and pop tarts dominated the music world, a British band broke through with an elegant, sophisticated sound that seemed anomalous to everything else that was happening at the time. Boasting a moody, ultra-melodic sort of Bacharach-meets-Bowie aesthetic, Cousteau made a splash with the single “Last Good Day of the Year” from their self-titled debut album. But after two more LPs, the band dissolved in 2005. Now the creative core of Cousteau, singer Liam McKahey and keyboardist-songwriter Davey Ray Moor, have come together again with a new album (and a silent “X” at the end of their name for legal reasons). And with Moor’s elegant melodies and McKahey’s commanding baritone at the fore, they’ve crafted a new vision for a new era. Here, Moor reflects candidly on the band’s birth, death, and rebirth.

Q: When Cousteau formed at the end of the ’90s, what gave you the feeling that it would work, and how did the sound come together?

A: Our sound sort of stumbled into being, beginning with myself leading a little trio. I decided to write the kind of music I wanted to hear; in a way, making an album which I felt was missing from my collection. That was the beginning of it — these bittersweet musical shapes, lyrics that spoke to intimacy and violence, and a vehicle for a nuanced voice to inhabit and shine. Liam and I doggedly believed this music was unique and powerful, but the world took a lot of convincing. We thought our first independent album would be the last and only thing we’d ever do, something to document our little vision before we admitted defeat.

Q: Is it true that Liam was initially enlisted to be a backup singer?

A: Initially I was the best singer I could find. You work with what you’ve got! I was playing my songs at a party in London and Liam started singing harmony vocals along with me. On the spot, I decided that our three-piece must become a four-piece and include Liam. At the time the rest of the band weren’t really into the idea! Over time it became clear that he was an exceptional singer. The day we lined up behind Liam under the Cousteau banner is the day we discovered our mojo. I can still remember the first time he sang “Your Day Will Come” in our barn in deep Somerset. In that moment the world changed for us.

Q: What did you and Liam get up to post-Cousteau?

A: The chemistry that bonded Cousteau, like hydrogen and oxygen in water, split apart when we stopped working together. Liam was writing songs and after years of touring I was interested in a more stable life working as a producer and songwriter. So Liam wrote the third Cousteau album without me and I released the songs I’d been writing on a solo album called Telepathy. Eventually, I got a job at a University teaching songwriting and Liam moved to Australia. There he got to really get to grips with his love of Americana and dark, gothic Tex-Mex music with his band, The Bodies. I had given up on music, but Liam powered on developing the voice we hear on CousteauX.

Q: What made you decide to put the band back together?

A: After Cousteau fell apart, we both went and raised families. The memory of Cousteau was tattooed on our consciousness and we’d think about it daily for that decade. As the years went by we both came to fully understand the rare and exquisite value of synergy. Some combinations are magic and irreplaceable. Our Cold War began to thaw when we communicated our relish at Rodriguez coming to world recognition (we had listened to him throughout the early Cousteau years). One day we met on the phone with an excited sense of “You’re still alive, I’m still alive—why don’t we make that music again?” Getting older has its upsides—you come to cherish special things.

Q: With the two of you living on different continents, how did you the album come together?

A: Soon after speaking, my creative engine sputtered into action. Now I had the opportunity to write for a different version of Liam and CousteauX. I listened to a lot of his work and a light went on—I could take our romantic, sensual formula and steep it in the darkness that is Liam’s native mien. I flew out to Australia with a nice microphone, a channel strip, and a laptop full of songs. He came to Devon in the UK and we finished off the collection.

Q: One of the most striking songs on the new album is “Burma.” Can you tell the story behind the lyrics?

A: I heard a story on the radio about a World War Two phenomena whereby soldiers would put acronyms on the back of letters home to their sweethearts. Some were lurid and sexual, some plaintive, and some romantic. The most popular was BURMA, which stood for “Be Upstairs Ready My Angel.” This struck me as an opportunity to frame a song reflecting the desperation of a soldier facing imminent danger writing back to his lover. The “upstairs” in the acronym might be the marital bedroom just as it might be a belief in heaven, or an afterlife. So many young men will have dreamed about their sweethearts as they faced battle — soldiers of all armies down the centuries. So it’s a song for every soldier who’s ever missed his gal and a more innocent time.

Q: What would you say is the biggest difference between this album and the old Cousteau?

A: The old Cousteau was in part written for me to sing. Liam just happened to be able to wear those suits as if they were tailored for him. On this album the songs were all written for him, and in doing that the songs envelop his character and aesthetic. So now, more than ever, this is a synergy of what he and I do best.

Q: Why the extra letter in the new name?

A: One of the main things that destroyed the band was a colossal legal threat from The Cousteau Society, who didn’t like our songs or our band name. Thankfully, “Cousteaux” is another, more common French family name. So we’re named after another family now. We have a giant “X” at the end of our name to honor the old band and its legacy, while signaling a reboot. It also looks like a kiss and a scar as we nestle next to the old band name on the playlists of tomorrow.

Q: What are your fondest recollections of touring with the old band, and what’s happening now with touring for CousteauX?

A: We did 288 gigs before I left the band, so my memories are a blur — Glastonbury and The Late Late Show with Craig Kilborn in LA were the best. To launch this new album we’ve been playing one-off shows in the UK and Europe. We’re off to Portugal today for a CousteauX gig. We’ve got a great little band of people I’ve worked with from Italy and the UK. People are loving it. We sound darker and more powerful than ever before. Our live guitarist, Lorenzo Corti, brings a lot of atmospherics and danger to the sound. Liam’s live vocal is actually more impressive live these days than on record. We’re a lean and hungry band these days. Edgier and darker than we were when we were younger. We’re so happy with it, and delighted to have evolved into something even more powerful.

1 comment on “The Return of CousteauX: Sensuality Steeped In Darkness”