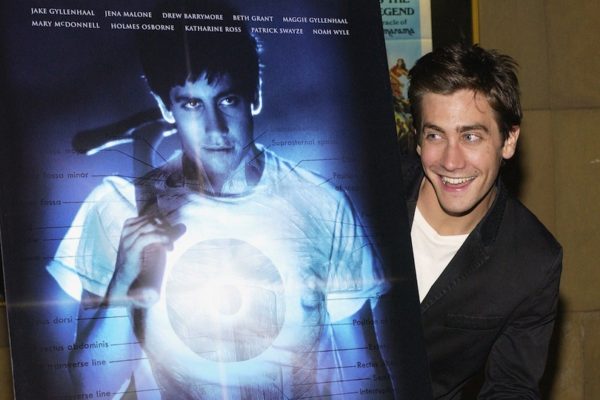 Fifteen years after Richard Kelly’s Donnie Darko opened to less than universal acclaim, his freaky mind-twister of a teen angst movie is back, and it’s as uncompromisingly bizarre as ever. But time has caught up to it: It’s still weird, but it and the world are more closely aligned than they were in 2001. Stop us if you’ve heard this one: Alienated from the rituals and routines of high-school life, misunderstood suburban teen Donnie (20-year-old Jake Gyllenhaal) — the angsty boy stuck between two normal, popular sisters, Yale-bound Elizabeth (real-life older sibling Maggie) and tiny dancer Samantha (Lilo & Stitch voice-star-to-be Daveigh Chase) — feels profoundly out of step with life. He sleepwalks and wakes up far from home; is bullied by the usual high-school jocks and jerks; suffers through zealous gym teacher Mrs. Farmer’s proselytizing on behalf of smarmy motivational-speaker Jim Cunningham (Dirty Dancing‘s Patrick Swayze, brilliantly subverting his every-guy good looks); and feels a poignant affinity with the local crazy lady, who happens to have written a meticulously whacked-out book about time travel and “tangent universes.”

[amazon template=right aligned image&asin=B01MR6PZGO]In a way you could say it’s Nancy Spungen’s And I Don’t Want to Live This Life jam by way of David Bowie’s “Five Years,” until you factor in Donnie’s imaginary friend Frank, a scruffy, wonky-eared rabbit complete with a mouthful of very un-bunny like teeth. Frank — the freak-show mirror of James Stewart’s sidekick in Harvey (1950), itself a discomfiting reminder of the days when alcoholic hallucinations were comedic whimsy — is the stuff of nightmares, starting with the fact that he’s not an imaginary rabbit — he’s an imaginary guy in a rabbit suit who, when Donnie dares him to take the stupid thing off, coolly suggests that Donnie remove that stupid man suit. What Donnie Darko nails is the raw misery of being a teenager stuck someplace where being anything other than blandly ordinary is the E-ticket to a special kind of hell. It’s all phonies all the time and all you can do is tear at your cuticles or cut yourself where the marks won’t show.

Made in 2001 but set in 1988, Donnie Darko is one big ball of serious messed-upness that tanked on initial theatrical release but refused to stay down, gradually finding its audience after its 2004 rerelease — adding in 20 minutes of footage that fleshed out Kelly’s hallucinatory ’80s world — and via DVD, which allowed for endless pausing and parsing, starting with the airplane engine that drops out of the sky to total Donnie’s room while he’s out nightcrawling. Look, you never think a hunk of blue ice (aviation speak for frozen airborne sewage) is going to total your roof…but freakish things happen, from stigmata to toads storms to falling engines.

On the other hand, Donnie Darko is firmly rooted in the every day and its discontents, in the notion that it only takes one minute of clarity, of wokeness, to see everything in a new light. And once the scales drop it’s hard to unsee what becomes apparent a.k.a. William S. Burrough’s naked lunch or the “frozen moment when everyone sees what is at the end of every fork.” It’s bad enough that the booty-shaking, school-auditorium performance by pre-pubescent Samantha’s “Sparkle Motion” dance troupe is 50 shades of wrong, wrong, wrong; what’s worse is a middle-school auditorium audience of parents and friends, cluelessly clapping and smiling.

I’m not going to say that Donnie Darko is ripe for rediscovery, because it’s never disappeared into obscurity… there’s even some talk of a sequel, though talk is cheap. But with every passing year it’s more in line with things people always knew but didn’t feel comfortable talking about. Time has caught up with Donnie Darko, and if the movie’s concluding montage, set to Tears for Fears’ “Mad World” doesn’t make you cry, then there’s no help for you.