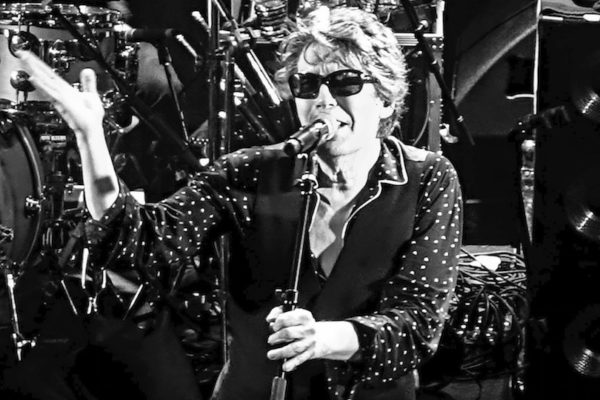 You don’t have to have grown up in the 1980s to love how the hit Netflix series, Stranger Things, picks music from the decade to help express the feelings the teen characters are experiencing. You’ve probably heard that Kate Bush’s 1985 ethereal classic “Running Up That Hill (A Deal with God)” has been discovered by a new generation of fans via being featured in the show.

This captivating song has skyrocketed in popularity since Season 4 began, topping the UK charts and reaching the Billboard 100 Top 10 in the US, giving the song more mainstream success than when it came out in 1985. The hauntingly beautiful song is not only used throughout Part 1 of the season to symbolize the trauma Max has experienced, but in a thrilling scene, her favorite song actually saved her life. Who can’t look back at their teenage years and feel like their favorite band helped get them through adolescence? The use of this Kate Bush song as a storytelling device in ‘80s speak, is totally awesome. We thought it would be cool to revisit some other forgotten gems from the ‘80s that would fit the eerie, angsty vibe in the town of Hawkins, Indiana. Check out these five ‘80s songs that are worthy of being brought back by Stranger Things for Season 5.

The only thing we know for sure about Season 5 of Stranger Things is that it will sadly be the conclusion of this coming-of-age saga, and it will take place in 1987 or later ( if they age up the characters). An epic finale deserves a tune as classic as “Never Tear Us Apart” by INXS. Released in 1988, on the Kick album that launched the group to superstardom, the ballad stands apart from the band’s upbeat hits like “Need You Tonight” and “New Sensation.” This song gives you all the feels from the opening synthesizer beats and orchestral string section that builds to a crescendo before Michael Hutchence even starts singing. This song is definitely one to wave your phone lighters to as magnetic frontman Hutchence belts out “Two worlds collided…”  and like the two worlds colliding for the teens in Hawkins, the evil that threatens their lives and tests their friendship, can never, ever tear them apart.

In the same way that John Hughes made the song “Pretty in Pink” more popular than when it was originally recorded, it’s easy to see The Duffer Brothers and their music supervisor Nora Felder, choose another song by the ‘80s New Wave/indie rock band, The Psychedelic Furs. Listening to this romantic, rousing song, I can just picture a scene with Steve and Nancy having a “will they/won’t they” flirty argument in the car while Richard Butler’s voice starts singing over the radio: “I’m a heartbreak beat. Yeah, all night long. And nobody don’t dance on the edge of the dark, I’ve got the radio on.” We all know it feels like love between these two and after Pt. 1 of Season 4, we’re all Robin rooting for them to get back together.

“Head On”  – The Jesus and Mary Chain

It wouldn’t be surprising to hear a song by U2 or Guns N’ Roses in the final season of Stranger Things, as most every teen rocked out to their chart-topping hits, but the teens from Hawkins aren’t “most” teens. If you listen to the song “Head On” by ‘80s alt-rockers The Jesus and Mary Chain, you’ll find it’s tough to play it just once. “Head On” has the perfect combo of pulsating guitar riffs and lyrics that speak to teenage drama. When singer Jim Reid sings the chorus “Makes you want to feel, makes you want to try, makes you want to blow the stars from the sky…”, you can’t help but hum along.

“The Killing Moon-” Echo and The Bunnymen

“Fate up against your will. Through the thick and thin. He will wait… until you give yourself to him. “ Since Stranger Things is a fictional tale, I don’t believe that Echo and the Bunnymen wrote this song because they had escaped Vecna’s clutches. That said, this dreamy classic sets such a calming, yet mystical tone that is at home in the world of Hawkins as D&D.  If there’s a scene in the final season that has Eleven contemplating sacrificing herself to save her friends and the world (again), the dreamy song “The Killing Moon” would keep fans nervously on the edge of their seat awaiting her fate. The only reason the 1984 song has likely not been used already is that it was already so impactful in building tension during the  2001 indie film Donnie Darko. Although that was over 20 years ago, why not let a new generation of fans discover the chill, gothic vibe of “The Killing Moon”?

“Sometimes you make me feel like I’m living at the edge of the world. Like I’m living at the edge of the world. ‘It’s just the way I smile,‘ you said.”  Revisiting “Plainsong” can give you goosebumps, and that’s before the lyrics kick in. If there’s ever a song that both 50-year-olds and 15-year-olds would agree is proof that beauty exists in the world, it’s “Plainsong.”.Not only does this emotional powerhouse of a song lead off The Cure’s critically acclaimed Disintegration album, but the fact that it came out in 1989 would make it a suitable choice for a song to sum up the end of the gang’s journey growing up while facing the end of the world.

As someone who was a teen in 1989, It’s blowing my mind that this timeless masterpiece came out the same year that MC Skat Cat danced with Paula Abdul. The intro to this song has over two minutes of synthesizer and guitar bliss and as the music washes over you, you can’t help but stop what you’re doing and be in the moment. People tossed labels on The Cure as “goth” or “moody,” but many of their songs are romantic pop classics. This is the song you want to listen to when you’re a teen lying in bed contemplating speaking to a crush at a party; or if you’re Max and her friends, flipping your world back on its axis while bonding over the trauma of escaping childhood in one piece.

Check out the last two movie-length episodes of Stranger Things Season 4: Part 2 when it drops on Netflix, July 1st.