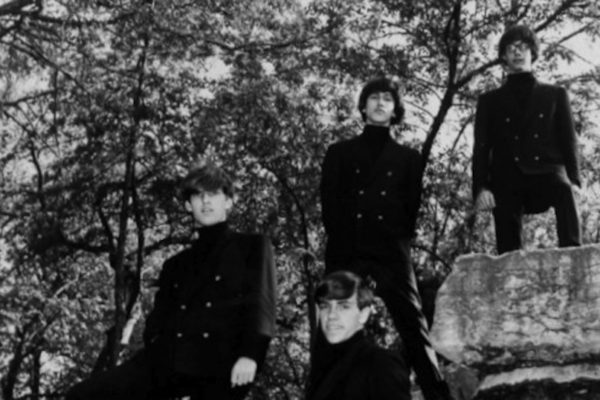 When it comes to The Beatles’ direct influence on other artists’ material, there are a few levels. There’s “Beatlesque,””a well worn buzzword that could apply to anything from ELO to Oasis, or the directly Fab Four-associated Badfinger. Then there are Beatles homage’s that put elements of the Liverpool lads’ sound in sonic quotes as a loving tribute.  Think Squeeze’s “F-Hole,” Billy Joel’s “Scandinavian Skies,” or The Jam’s “Start” (dig the “Taxman” bass line).” But the final, most extreme stage of artistic Beatlemania is the overt adaptation of the band’s style, achieving a startling sonic facsimile in the process. Sometimes it’s a subconscious process on the part of artists with plenty of their own ideas, and sometimes it’s…not. Here’s a handful of the best from  that “point-of-no-return” third stage.

In 1969, a bunch of Beatles-besotted young men from St. Louis made a demo that earned them an invitation from EMI to cut an album in London at the legendary Abbey Road studio. In The Beatles’ studio, with The Beatles’ engineers, and even a couple of The Beatles’ instruments, how could The Aerovons help but go with the flow? Unfortunately the band fell apart shortly after those sessions and the album remained unreleased for over 30 years. Leader Tom Hartman, who remains active today, has stated he only heard the then-new “Across the Universe” once before writing “Resurrection,” but it sure must have stuck in his mind.

Pete Dello’s “It’s What You’ve Got”

Pete Dello was the lead singer for the ’60s British band Honeybus, which had a big U.K. hit in ’68 with “I Can’t Let Maggie Go” (though they never troubled the American charts). Dello quit the band shortly after their hit single, and in 1971, recorded the great, nearly lost-to-time solo album Into Your Ears. Like many of their peers, Honeybus bore some Beatles influence, but Dello’s McCartney side is really underscored when  left on his own, especially on this fetchingly tender track.

Martin Briley and Brian Engel made no bones about the aesthetic impetus behind their 1973 project, Liverpool Echo. The very name illustrates their intentions, as does the album cover displaying a Beatles story from the newspaper that gave Briley and Engel’s outfit its name. The pair had been in the ’60s psych-pop band Mandrake Paddle Steamer, and Briley would score a power-pop hit in the’80s with “Salt in My Tears.”  Liverpool Echo’s lone, self-titled album was expressly dedicated to emulating the early Beatles sound; all things considered, they did a damn good job of it.

Emitt Rhodes’ “Somebody Made for Me”

Emitt Rhodes has been a beloved cult hero for decades. His early-’70s one-man-band albums frequently tagged him as “the American McCartney,” yet didn’t make much commercial headway. Still, they earned him the unceasing admiration of a small-but-hardy following. The notoriously reclusive singer-songwiter and multi-instrumentalist kept a low profile from the mid ’70s until his comeback album just a couple of years ago. With the natural McCartney-esque timbre of his voice,  it was only natural to be influenced by The Beatles. While it’s unlikely he was setting out to imitate the Fabs, beauties like this one sure do suggest an alternative Beatle universe.

Sleepy Hollow was an early ’70s band from Philadelphia who didn’t leave much of a trail behind them beyond one album, released in 1972. But what they did leave behind is a minor masterpiece of post-psychedelic rock that digs deeply into The Beatles’ late-’60s output for inspiration. “Sincerely Yours,” the self-titled album’s opening track, clearly announces their stylistic agenda — it sounds so much like an Abbey Road/White Album-era John Lennon tune that it might have even made Yoko do a double take.

PS. Looking to dig deep into the Beatles? Deconstructing The Beatles is your Master Class!