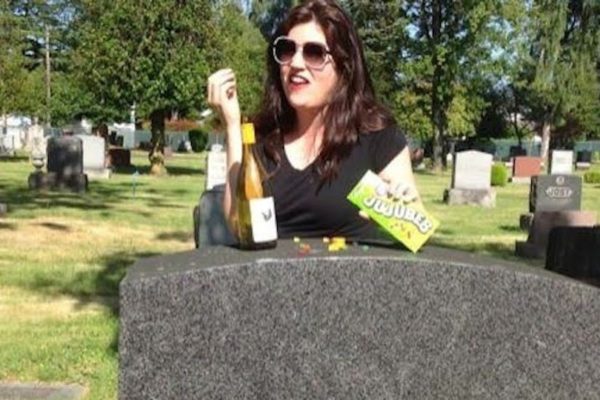 None other than Fight Club author Chuck Palahniuk said of Monica Drake’s first book: “Clown Girl is more than a great book. Clown Girl is its own reality.” It’s a wise assessment that could easily apply to her other equally-great books, each of which shares a wit that’s as painfully sharp as a paper cut, as well as some seriously big-picture thinking. That her often satirical fiction (The Stud Book, The Folly of Loving Life…) is repeatedly set in Portland has led some to compare her work to Portlandia. But the truth is that her work, while equally funny, is deeper, darker, and in its own sly way, a bit more deranged.

Q: Your first book Clown Girl certainly ranks as one of the great comic novels of the new millennium. So who would you say are the great women clowns of the 21st century?

A: This question is interesting! I define “clown” broadly, really. To my mind, clown work is more the spirit of the act than any traditional wig and squirting-daisy routine. I’ve always been in awe of Phyllis Diller, with her routine, based largely on making fun of her physical self, appearing intentionally wild, not traditionally glamorous and yet really showing up in her own style of high comedy glam. Lucille Ball and Lily Tomlin are two other examples of women I’d say draw on clown aspects in their work, with high comedy and exaggerated facial expressions, physical movement. In Clown Girl, though the narrator is clearly clown-identified, easily recognized, her crew is sometimes less overtly clown-drawn but still working in the field. Mostly, I’m interested in the clownish aspect of humanity at large. I’m also interested in the full expression of the gender continuum, so with this question I start spinning out on gender a bit, too. One of my former students is now doing “Clown Drag,” which I think is great, amazing really. He’s gotten some blowback by those who feel he’s insulting and appropriating, crossing both gender and, well, makeup boundaries. But when we think of the clown image, for the most part culturally we still think of men as being the ones behind the red nose. It’s oddly gendered, for a role so rich in makeup, isn’t it?

Q: In your second novel The Stud Book, one of the characters uses the albums left behind by her dead dad as a kind of I Ching. If you were to offer a single album to someone as a guide to life, what might it be?

A: Oh, wow. Huge question! Yes, that scene in the book is about divination through the abandoned albums of a dead father. It’s about looking for a lost voice in the voices the person most listened to. I don’t know if there’s a single album that can be all of that. It’s like walking into a bookstore and opening a book, asking a page to direct one’s life. We all do that, right?

Recently I saw Television in concert. It was a great show, really kind of psychedelic and captivating. It brought me back to a time decades ago when I first listened to Marquee Moon, and that album drove my life, for awhile. I don’t know if I’d offer it as advice, but in spirit, it can take a person places.

Q: Do you listen to music when you write? If so, what kind of music? How does that impact the process?

A: I don’t listen to music when I write, but I think about writing while I’m listening to music. While I’m writing, I listen to my own words in my head, and often reading them out loud. I focus. Sometimes I don’t hear people talking to me….

Q: Your collection of short stories The Folly of Loving Life reads like a fractured portrait for which the main character just happens to be a city — in this case Portland. What would you consider the quintessential Portland landmark for visitors to see?

A: I’m fond of the John Reed bench up on the hill in Washington Park. The bench itself isn’t much. It’s a bench dedicated to Oregonian John Reed, author of Ten Days that Shook the World, about the Bolshevik revolution. It makes sense that the bench is ordinary, because John Reed wanted to be a man of the people, not the elite. But the bench has a view over the entire city, and as a landmark, it speaks to one voice which used to be radical, raised in this city. There was a time his family controlled the water supply of Portland, and owned a portion of the city’s smelter. They made money on fire and water, and they were wealthy. John Reed saw the corruption in the injustice of a rich/poor split, and spent his brief life looking for a more just political system.

Q: You’re part of a writers’ group that includes Lidia Yuknavitch (The Book of Joan), Cheryl Strayed (Wild), and Chuck Palahniuk (Fight Club). How did this incredibly talented collection of authors end up in one room together repeatedly?

A: Way back in the ‘90s, I took a class from Tom Spanbauer. I was Tom’s first student in Portland when he moved here from New York. He taught a class over at Canon Beach around the same time, and then those students joined us in Portland for his “kitchen table” style workshop (in his house), and that group included Chuck Palahniuk. Chuck was amazing from the minute he joined the workshop, writing smart, fast stories — and I was glad because he laughed out loud at my jokes, when sometimes other people just looked…puzzled! Ha! After a few years, I went to grad school down in Arizona, but the rest of our group broke off and kept workshopping together, separate from Tom’s group.  When I came back from grad school, Fight Club had just come out. I called Chuck at his old desk job, and he surprised me by answering the phone. I had no idea he’d still be at Freightliner, but there he was, and he said they were all still meeting. A writer named Suzy Vitello had become our organizer, largely, sending out the weekly email to see who had pages, and sometimes hosting at her house. Chelsea Cain joined in, and Lidia Yuknavitch, and Cheryl Strayed as she was working on Wild. It’s an amazing pack of writers. I’m honored to know them. I think it’d be fair to say Tom brought us together, because he has a way of building community. And then we stuck with it.

Q: Your online novella Bones in the Garden is funhouse noir, reflecting a strange kind of warped seediness that’s both funny and scary. Are you a fan of noir? Any writers in particular?

A: Thank you! And yes! I love noir. Years ago I read Dashiell Hammett and Raymond Chandler. I love old black and white films, and plot twists! I also love books like Midnight in the Garden of Good and Evil, by John Berendt, based on true crime and big questions.

Q: What are you currently working on? What’s next for Monica Drake?

PS. When it comes to a reading list, you’ll never go wrong with David Sedaris and his latest.  And although we’re deep into winter, these 80s beach reads will warm you up!

Photo Credit: Image of Monica Drake courtesy of the author

0 comments on “Author Monica Drake on Clowns, the I Ching, and Noir”