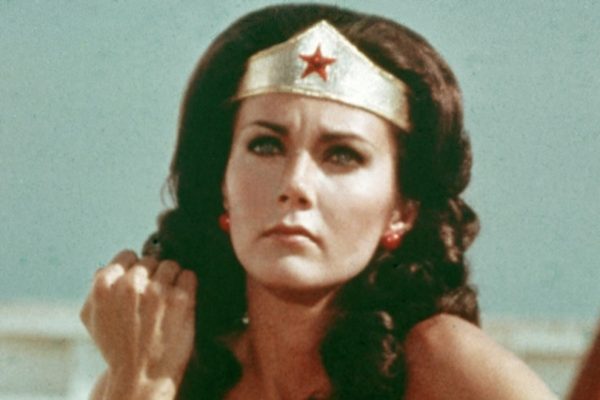 The ’80s were a more innocent time to be a teen. For instance, when your parents turned off their bedroom lights, that was your signal to sneak downstairs to catch an R-rated movie like Porky’s or The Last American Virgin on HBO. This was the decade when celebrity crushes went up on your bedroom wall and got little more than a bemused look from mom and dad. Well, it’s time to turn on the childhood desk lamp of memory and look back at your earliest attempts at home decorating.

1. Catherine Bach
“Just two good ol’ boys” may be Waylon Jennings’ opening lyric for The Dukes of Hazzard theme song but cousin Daisy Duke (Catherine Bach) is who preoccupied most boys’ hormonal minds. That and the General Lee, the brothers’ 1969 bright orange Dodge Charger with a 01 painted on its side. A poor man’s TV version of Smokey and the Bandit, the show lacked Burt Reynolds’ slyness but it possessed a female lead whose name has become synonymous with short shorts. Put girl and car together on glossy paper and you had a poster that was every boy’s dream.

2. Jennifer Beals
In the 1983 movie Flashdance, Jennifer Beals was way more than just “a steel town girl on a Saturday night.” She was “a maniac on the floor” catapulted to fame by Michael Sambello’s hit song (which became a staple at Bar Mitzvahs in the mid-80s). Sure, she “danced” at an awful nightclub but when the water came splashing down, what young libido didn’t see “art.” Her image on the Flashdance movie poster made something special out of a cutoff grey sweatshirt paired with leg warmers. What a feeling, indeed.

3. Christie Brinkley
If there were a Mount Rushmore dedicated to ‘80s teen boy crushers, Christie Brinkley would definitely be on it. She was the Sports Illustrated model who didn’t marry for looks. She married Billy Joel! (Remember his “Uptown Girl” video?) She was also the girl in the red Ferrari who made Clark W. Griswald (Chevy Chase) jump into a freezing pool in Vacation. That she still looks great now doesn’t hurt either.

4. Lynda Carter
Superhero movies and TV shows are ubiquitous. That wasn’t always the case. In the late ’70s, the best we had was Lynda Carter twirling around to become Wonder Woman. And unlike her peers from the era, the image of Carter as Wonder Woman with her golden lasso crossed genders and sexual preferences. Indeed, if there were a “poster child” for superhero drag, this iconic image might be it. RuPaul has worn it well.

5. Farrah Fawcett
Did your childhood begin in the ’70s? Chances are the first TV character you wanted to be was Lee Majors’ Six Million Dollar Man, especially after you found out he was married to Farrah Fawcett of Charlie’s Angels. Hell, if you could’ve, you would’ve paid six million to meet her. Years before Pam Anderson jogged in slow-motion on a beach in a red bathing suit, Farrah had been there and done that. Her poster not only launched her career, but it also created a hairstyle sensation.

6. Bo Derek
Her image was everywhere; that photo of her with beaded cornrows and running on the beach was as iconic as Fonzie in a leather jacket giving a thumbs-up. Bo Derek in 10 was a synonym for sex before you knew what sex was. So the movie is just so-so. That slow-motion scene in which a goofily elated Dudley Moore runs to Derek is one of the most parodied comedy scenes ever. If you were 11 or 12 or possibly in your late 40s, chances are good that at one point, you gazed up at this poster with fantasies of running towards her yourself as Ravel’s “Bolero” plays in the background.

7. Kelly LeBrock
There are few movies that capture male adolescent awkwardness as hilariously as Weird Science. The teen sex comedy plays out one ultimate teen boy fantasy of being with the perfect woman and Kelly LeBrock was so great playing Lisa, the woman created by two dorky would-be Dr. Frankensteins, that she inevitably ended up thumbtacked over the beds of high school boys nationwide. She had the cool British accent. She could make a Ferrari appear out of thin air. And she handled tough bikers worthy of a Mad Max movie. What wasn’t to like here?

8. Olivia Newton-John
Forget the mostly innocent Sandy from Grease. Olivia Newton-John’s image took a decidedly different direction when she released the Physical album in 1981. The sexed-up title single was a pop-cultural phenomenon; her look for the cover and was unquestionably hot. That the accompanying video was homoerotic was more than transgressive. It was outrageous. The best thing about the Newton-John poster is that your mom probably bought it to hang in the basement where she practiced her Jane Fonda workouts. Little did she know.