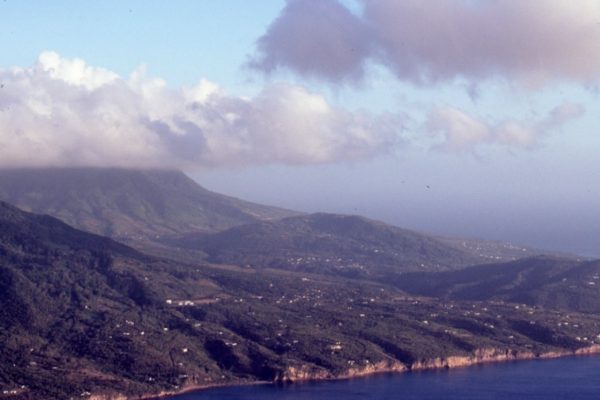 Montserrat is a tiny mountainous island in the Eastern Caribbean. It was “discovered” by Christopher Columbus on his second voyage to the New World but the famous explorer didn’t land on the island because of its lack of a safe harbor. Instead, he simply christened it “Montserrat” because its tall, sharp mountain peaks reminded him of the terrain near a Spanish monastery of the same name. Over time, the island was claimed by the French, the Spanish and the British. It remains a British colony today.

I’ve been involved in music and music-related business most of my life. Way back in 1963, well before The Beatles’ Ed Sullivan Show appearance, my family in London had been sending me newspaper clippings and photos of John, Paul, George and Ringo. (They didn’t realize the band wasn’t known stateside yet.) By the time Beatlemania took over the US in 1964, I was intimately familiar with the Fab Four. In fact, I instantly became the expert of all things Beatles at my elementary school.

In 1977 when I was much older, I left Detroit for Los Angeles — following not only Motown Records but many Motor City musicians who’d made the trek before me. After 15 years in LA and five in Montserrat, I moved to Nashville where I eventually worked for the Gibson Guitar Company. In my role as Global Artist Relations Director based in both Nashville and London, I worked with an extensive list of iconic artists like Jimmy Page, Jeff Beck, Eric Clapton, and Paul McCartney on limited run artist-signature guitars. In 1999, Sir George Martin kindly invited my assistant, Juliette Avery and I to use AIR Studios London and co-hosted an event, both honoring Elvis guitarist Scotty Moore, and launching our new Gibson artist office on Denmark Street. In attendance was a who’s who of iconic UK-based guitarists. Among the many artist guitars that I was privileged to help develop in subsequent years was the 1963 Paul McCartney Epiphone Texan.

While living in the UK, my wife and I attended the final night of the Paul McCartney tour at the Kings Docks Liverpool in June 2003 and got an opportunity to speak with Paul afterwards. I suggested the idea of creating a signature model to generate funds and awareness for Paul’s then-favorite charity “Adopt a Minefield.” As a result, we worked closely together on a limited run of exact copies of the famous acoustic guitar on which he had written “Yesterday” and that he had played on that first Ed Sullivan show. But let’s get back to Montserrat.

In the early 1600s, Montserrat was a refuge for Irish indentured servants earning their freedom from servitude. Unlike most British territories at the time, Montserrat permitted them to practice their Catholic faith freely. Even today most family and place names in Montserrat are distinctly Irish. It is commonly referred to as “The Emerald Isle of the Caribbean” because of its Irish history and a physical resemblance to Ireland. Most local citizens share both Irish and African heritage and are proud of both. Indeed, St. Patrick’s Day is a national holiday celebrated for a full week every March.

During the 1960s and ‘70s, Montserrat was re-discovered by some more adventurous expatriate Americans, Brits, and Europeans, including a handful of writers and a few celebrities. They loved it for its unspoiled beauty and friendly people. But things really began to change in 1979 when Sir George Martin opened AIR Studios Montserrat. Which brings me to my own backstory.

I personally have been visiting Montserrat regularly since 1975. My father was a former Royal Air Force pilot who continued to fly all his life. Perhaps it was a mid-life crisis or just his adventurous streak but he began flying his single-engine airplane south to Florida, then Jamaica then down to the Leeward Island chain until he discovered this little gem called Montserrat and was immediately captivated. One day in 1977 while I was living and working in LA, I got a rare phone call from my dad telling me that he had brought the Beatles “manager” to the Island and that he would be staying for a week or so.

Me: “Wait, the Beatles manager was Brian Epstein and he’s dead. What are you talking about?”

Dad: “No, he’s very interested in aircraft and was in the Royal Navy’s Fleet Air Arm. We met in Antigua. He’s thinking of building a studio in the Caribbean and I suggested Montserrat.”

What happened next? Well, to quote from the AIR Studios web site:

“In 1977, Sir George [Martin] fell in love with Montserrat and decided to build the ultimate get-away-from-it-all recording studio. Opened in 1979, AIR Studios Montserrat offered all of the technical facilities of its London predecessor, but with the advantages of an exotic location.”

Fast forward to the studio opening in 1979. The first band to record in the new space? The Climax Blues Band. Next up was James Taylor and Jimmy Buffet. Ultimately, the studio hosted a laundry list of top artists including Dire Straits (Brothers in Arms) and The Police (Synchronicity and Ghost in the Machine, the former ranking as the band’s final and most successful album which won three Grammy Awards). After that there was McCartney, Stevie Wonder, Elton John, Duran Duran, Ultravox, Lou Reed, Michael Jackson, Black Sabbath, Pink Floyd, Eric Clapton, and The Rolling Stones (who came on the recommendation of Keith Richards who’d recorded Talk Is Cheap there with his band The Xpensive Winos). So many musicians recorded multiple albums there that the island and the studio alike eventually gained a reputation as a refuge from the stresses of life in the fast lane. Of course, it was also a world class facility with top engineers on staff who rotated down from AIR London.

Those were truly magical times in Montserrat. These icons could spend days on the beach, hiking, or even windsurfing (as Sting, and Guy Fletcher and Alan Clark of Dire Straits did) then in the evening, they’d go to work. Paul and Stevie used to jam at the local pub The Agouti while recording “Ebony and Ivory.” In 1981, Sir Paul recorded his Tug of War album there which Rolling Stone’s Stephen Holden hailed as “the masterpiece everyone has always known Paul McCartney could make.”

One evening, local singer Eloise Lynch, who had several popular songs on ZJB’s Radio Montserrat, was asked to perform at the seaside restaurant somewhat ironically named the Yacht Club. The idea was that the Stones (who had a BBC crew in tow) would arrive and then dance to local music. The filming was to take place between 9:30 and 10PM. Since word had got out among students at the American medical school, the place that night was packed. Ten o’clock came and went but no Stones. By midnight the crowd was getting rowdy and Eloise had waited long enough. She said either we play now or go home. Just as the band got started, the camera lights came on as Ron Woods, Charlie Watts, Mick Jagger and their small entourage walked in.

Afterwards one of the girls, who had been dancing with the Stones came over and said to Eloise, “Mick wants to meet you.” Her response was “then tell Mick that he shouldn’t have kept me and the band waiting for over two hours.” This was somewhat typical of the down-to-earth attitude of the Montserratian people. Eloise couldn’t have cared less about an inconsiderate English rock star. The Stones album Steel Wheels turned out to be the last recording done at AIR before the damage from Hurricane Hugo followed by changing conditions in the recording industry had forced the closure of AIR for good.

Even so, Sir George made helping Montserrat recover from the devastation caused by Hugo and a later volcanic eruption a priority for the rest of his life. He organized the Music for Montserrat concert in 1997, and created a very limited-edition reproduction of the string score which he had written for the song “Yesterday.” Both he and Sir Paul hand-signed each framed copy which were titled “Yesterday for Montserrat.” Produced in the UK, these prints were made to museum-quality specification on Somerset Enhanced 100% cotton rag paper with hand-finished edges. The money raised from this and other various fundraising efforts were used to build a community center on the island which broke ground in 2001.

In my capacity as Artist Relations Director for Gibson Guitar Company and Slingerland Drums, I had the pleasure of working with Sir George on the Music for Montserrat charity event held at the Royal Albert Hall on Sep. 15, 1997. The concert featured Jimmy Buffett, Mark Knopfler, Sting, Elton John, Eric Clapton, Paul McCartney, Midge Ure, Phil Collins, Carl Perkins and many others who had recorded on and inevitably fallen in love with the island.

All photos courtesy of Patrick Foley.

0 comments on “Where George Martin Found His Post-Beatle Groove”