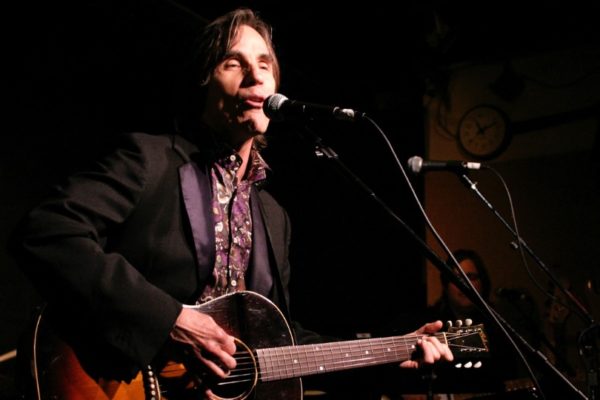 No one epitomized the West Coast singer-songwriter movement of the early 1970s better than Jackson Browne. A preternaturally-talented writer, singer, and instrumentalist, Browne began his solo career with his self-titled debut in 1972 and, from there, churned out a consistent string of singles and albums over the next 45 years. Many of his songs are bona fide classics and have become staples on everything from classic rock to easy listening formats. But his catalog is so extensive that it’s likely that, unless you’re a diehard follower, you might have missed some wonderful tracks. Here are 10 that deserve your immediate attention.

1. “Song For Adam” (1972)
It’s hard to find a weak song on Browne’s 1972 debut album. Most folks know the bouncy hit “Doctor My Eyes” and the languid ballad “Jamaica Say You Will” from that disc. But this haunting acoustic track that details the songwriter’s experience with a friend who committed suicide is utterly beautiful and hauntingly sad. Browne’s attempts to understand death is a theme that runs through his entire body of work, and this track is an amazing start to that preoccupation.

2. “Looking Into You” (1972)
This is one of the first examples of Browne’s ability to conjure a lilting piano melody that will have you in the song’s corner before he even sings a word. In this case, he seals the deal with gorgeous lyrics about his search for meaning in life and the woman whose presence causes everything to make sense. It’s the kind of song that can make you tear up and smile broadly while thinking of a special person in your life who makes your “embattled illusions” disappear.

3. “The Times You’ve Come” (1973)
1973’s For Everyman didn’t quite reach the heights of his debut album, but Browne is on top of his game on this track. Cascading acoustic guitars are the backdrop for one of his finest meditations of love and loss. The eloquence of the lyrics is something that few songwriters could hope to match, especially when married to such a wistfully wondrous melody. And, as if the song didn’t have enough going for it, Bonnie Raitt drops by for some tender harmony vocals.

4. “Linda Paloma” (1976)
1974’s Late for the Sky was Browne’s masterpiece, an album for which there can’t be enough praise (and which isn’t represented on this list because all of the finest songs are pretty much singer-songwriter standards by now.) From the 1976 follow-up The Pretender comes this exquisite, Latin-tinged number about the danger of believing too much in the promises of pretty songs. And songs don’t get much prettier than this.

5. “Love Needs A Heart” (1977)
Running On Empty, Browne’s brilliantly-executed concept album about life on the road, produced many rock-radio staples, including the title track and “The Load Out/Stay.” But if the album’s been collecting dust on your shelf, pull it out and spin this beauty co-written with Little Feat’s Lowell George and singer-songwriter Valerie Carter. The narrator muses on whether or not he’s worthy enough for love on one of the most soulful songs Browne has ever delivered.

6. “Black And White” (1986)
Browne spent much of the ‘80s delving into more politically-themed material. Hits like “Lawyers In Love” and “Lives In The Balance” proved just how adeptly he could tackle these topics. This closing track off 1986’s Lives in the Balance manages to meld the personal and political. The narrator bemoans the fact that many have lost the will to stand up for the dreams and ideals that once inspired them. The refrain of “Time running out” makes clear the import of the situation.

7. “I Am A Patriot” (1989)
As gifted as Browne might be as a topical songwriter, one of his finest political statements came courtesy of Stevie Van Zandt. The E Streeter wrote this rhythmically-deft anthem and Browne gave it a passionate reading on his 1989 album World In Motion, providing a nice showcase for his underrated interpretive skills. He seems to really enjoy the chance to take on something he didn’t write and imbue it with gusto and heart.

8. “Two Of Me, Two Of You” (1993)
Browne took a long break from writing about relationships in his songs, but his return to that arena with 1993’s I’m Alive was an unmitigated triumph. The album’s highlight is this thorough examination of how a person can hide his best self from the person who needs to see it the most. You could slide it right onto Late For The Sky and not miss a beat, which is kind of like saying a hitter is good enough to bat behind Ruth and Gehrig with the 1927 Yankees.

9. “The Birds Of St. Marks” (2005)
Browne wrote this song in 1970 for Roger McGuinn but it was never recorded. He rectified that problem by including it on his outstanding 2005 live album Solo Acoustic, Vol. 1. He would later give it a studio release in a suitably Byrds-y arrangement on 2014’s Standing on the Breach, but the live piano-and-vocal take is the better of the two. Browne’s gift for metaphor and melody are on full display on this stunning performance.

10. “Here” (2014)
The closing track off Standing on the Breach, his most recent studio album, proves that Browne can still bring the heartache like nobody else. Browne dials down the fancier wordplay from his early days on this track and gets to the heart of the matter, as he acts as a kind of Greek chorus for some poor sap who’s in a love-starved funk trying to adjust to life without his girl. Topnotch work, but at this point would you expect anything less from this master?