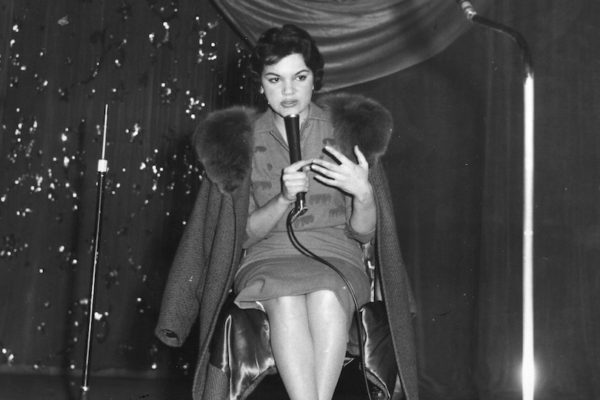 With apologies to Mr. Seger, rock and roll sometimes “forgets.” Sometimes inexplicably so. Consider, if you will, the case of one Connie Francis, (nee’ Concetta Rosemarie Franoconero of West Orange, New Jersey), a star of the highest caliber of song and screen in the genre’s development, and included too rarely in conversations of the all-time greats. It’s hard to pinpoint any particular reason why this should be, but rather than dwell upon the reasons for Connie’s absence in the conversation, let’s try to accentuate the positive and give her her proper due.

Connie Francis was a whirlwind. Her biggest hits – “Who’s Sorry Now,” “Stupid Cupid,” “Lipstick On Your Collar” – were ubiquitous radio fare between her first Top 40 hit in 1955 and her final one in 1964. Her star turn in the movie, Where the Boys Are, confirmed her as a multi-dimensional talent. The movie has aged shockingly well, its humor mostly intact. Her charm was complete and undeniable. Her mezza-soprano was a genuine gift of nature. She sold more than 200 million records.

Just as Chuck Berry, Little Richard, Elvis, and the other men of Rock and Roll’s first generation served as archetypes for decades of descendants, Connie Francis paved the way for every pre-Madonna (and more than a few post-Madonna ones to boot) female pop star. The debts of gratitude are many: Lesley Gore, Cher, Debbie Gibson, and Whitney Houston, just to name the first people that came into my head. It may also be worth noting that, unlike men, whose points of inspiration could be “wild men,” “lunatics,”  sexual healers, or nerdy geeks, Connie was alone in those early days. Rock and Roll, and surely the world at large, were in no way ready for a Joan Jett or a Courtney Love. The clean-living schoolgirl had to suffice well into the ’70s. Petula Clark, The Supremes, and Karen Carpenter could all easily claim Connie’s mantle.

The answer to why Connie is forgotten is contained within her success. She belongs to the group that too many latter-day rockers can’t abide: polished teen idols. Forgetting that her stardom began in 1955, her detractors lump her in with the all-but-shunned “producer era” between the end of the beginning of rock and The Beatles’ “saving” of the form. This view does, of course, have some merit.  Connie was certainly capable of schmaltz,  but it should be a non-starter to anyone with functioning ears that she was not exactly Fabian — but neither was she Annette Funicello.

I wonder, too, whether there’s something about our jaundiced, hyper-sexualized society that just can’t understand Connie Francis and the world she existed in. Her songs, while generally well-written enough, bespeak a naivete’ that we can’t possibly relate to.  To our coarsened ears, it sometimes sounds almost like she inherits a world with the Duggars as her only audience. It’s a difficult thought because you can’t help but wonder which reality is preferable. It’s easier to just throw Connie Francis and her contribution in shaping rock and roll down the Memory Hole.

Like the vast majority of her peers, the British Invasion all but ended Connie’s run in the Top 10. She was able to put her talents to use productively by becoming something of an adult contemporary Vegas singer —  and she remained in the music business until the early 70s when a series of divorces, a mental breakdown, and a brutal rape sidelined her. Finally, in the late 80s and early 90s, she attempted a series of comebacks but was understandably never able to fully reclaim a stake in the industry. These days, and according to her website, she is very active in mental health awareness.

There’s still time, luckily enough, to restore Connie’s legacy.  If she feels cheated by history, she shouldn’t. Too many people have her in their hearts for her to ever truly fade.  Your turn.

PS.  20-some years on, another singer with a distinctive voice….and some issues.  Plus, our look at one of the great female artists of our time.

10 comments on “Give Connie Francis Some Respect… Really”