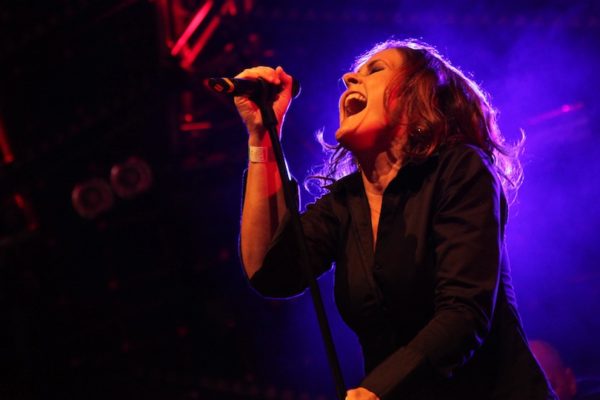 She had one of the most distinctive voices of the ’80s New Wave scene. Alison Moyet’s warm, bluesy voice wove through the sinuous synth lines (as performed by keyboardist Vince Clarke) of Yazoo hits like “Situation” and “Don’t Go.” Yazoo formed in 1982; by 1983, she and Clarke were at each other’s throats, recording their individual parts only when the other was not at the studio. The group ended that year and Moyet took on a solo career.

She released her debut solo album, Alf (named for her nickname) in 1984; in 1985, she famously covered for Sir Paul McCartney at Live Aid (UK), when his microphone failed during “Let It Be” (it was later overdubbed for the CD release).

Alison Moyet was having a big ’80s moment. And then? Moyet went through some changes.

In 1991, she released Hoodoo, then spent years fighting to regain control over her artistic vision. Although she continued to release albums, pressures to be “more commercial” ultimately led to her being released by the label. It didn’t help that an encounter with her idol, Elvis Costello, resulted in a bout of agoraphobia. After one of his shows, she blundered through a comment, meant to be funny, and was so embarrassed that she swore to never indulge in that whole music biz “scene” ever again. That moment escalated into a long period in which she barely left her house (she’s since gotten help for the agoraphobia).

These days, Moyet is a mom to three kids, and on her second marriage. In 2022, she was named an “MBE” by Princess Anne. For the last few years, she’s gotten back to making music on an indie label. She also performed in a couple of plays in London’s West End, to good reviews. Although she’s been offered slots on a variety of UK reality shows, she’s not interested in “celebrity.” In fact, she chuckles over the inevitable comparisons to Adele (another British girl with serious pipes). Moyet doesn’t need modern equivalents: she remains one of the great voices of her day.

PS. While we’re on the subject of powerhouse female singers, check out our post Chrissie vs. Miley for more on Chrissie Hynde and her thoughts on the latest group of pop stars. And speaking of 80’s stars who’ve recently resurfaced, you may enjoy our update on Paul Young.