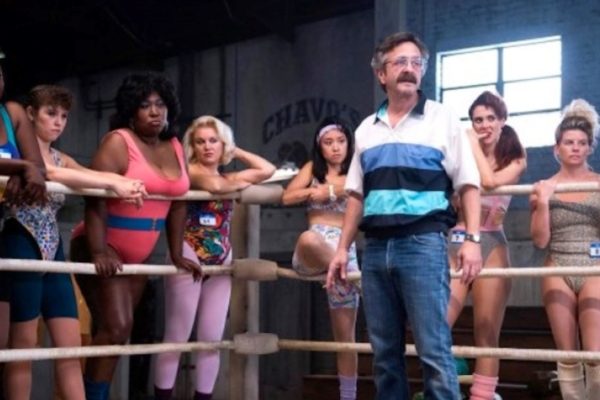 Remember when Amy the Farmer’s Daughter, Big Bad Mama, Jailbait, and other leotard-clad Amazons leapt from turnbuckles, trash-talked their nemeses, and punished each other’s bodies in Gorgeous Ladies of Wrestling? While these pin-up acrobats of sorts were no doubt displayed for an adolescent male gaze, this vaudevillian novelty nevertheless shattered a glass ceiling for women in televised sports while making an inadvertently empowering statement about female physical prowess. G.L.O.W. ran for four seasons before being cancelled. And although the groundbreaking show mainstreamed female professional wrestling, its roster of costumed characters disappeared from pop-cultural consciousness. That is, until a 2012 documentary revived interest: GLOW: The Story of the Gorgeous Ladies of Wrestling.

Brett Whitcomb’s doc unearthed a compelling origin story, tracing the show’s rise and abrupt fall (apparently due to some carnal indiscretions). A military work ethic — imposed by director Matt Cimber — meant the ladies had to bunk together 24/7 in the “G.L.O.W. House” and were forbidden to use each other’s real names (only wrestling noms de guerre, please). Interviews with the actors/models/athletes revealed that despite skimpy outfits, over-the-top public personas, and non-stop knees-to-the-nether-regions, G.L.O.W. inspired a solidarity that only comes from crushing taboos. Inspired by this doc, screenwriters Liz Flahive and Carly Mensch resurrected the “Gorgeous Ladies of Wrestling” from the pop-cultural past for a new fictional Netflix series. Starring Alison Brie (Community, Mad Men) and comedian Marc Maron (WTF, Maron), the first season of GLOW proves to be quite an homage, delivering 10 addictive episodes of gut-busting, pile-driving, heart-breaking comedy. Plus, a whole lot of wrestling.

Ruth Wilder (Brie) plays an out-of-work L.A. actress (is there any other kind?) who stumbles into a dubious casting call helmed by sleazy B-movie auteur Sam Sylvia (Maron, in top form). Ruth’s tolerance for misogyny gets tested on day one, as a coked-up Sam lays out his not-so-sophisticated casting criteria: “One. Can you move and can you follow basic directions? And two. Do I like your face, or do I not like your face?” After Sam confirms the job is neither porn (thank god!) nor a legit acting opportunity (aw shucks), Ruth and a motley crew of potential women wrestlers settle in for a regime of hardcore physical training accompanied by some outlandish interpersonal conflicts. Welcome to the crude, exploitative world of “sports entertainment!” Practicing body slams, headlocks, and acrobatic falls is a given, but learning how to “sell the pain” and put up with ceaseless body-shaming and lascivious advances prove to be equally important job requirements.

As the gang stumbles toward their first televised bouts, Ruth and former BFF Debbie Eagan (a breakout role for Nurse Jackie’s Betty Gilpin) work through personal and professional jealousies (Debbie was a mostly comatose soap star), as their alter-egos become the show’s centerpiece. The plan: Ruth’s Soviet-inspired “Zoya the Destroya” will go head-to-head with Betty’s “Liberty Belle,” a caricature of wholesome All-American sweetness. Though every character gets a turn in the spotlight, some stand-out subplots deserve attention. Black stuntwoman Cherry “Junkchain” Bang (Sydelle Noel) is now fighting for legitimacy in an industry that gets “a little white after 1979”; the gentle soul Carmen a.k.a. “Machu Picchu” (Britney Young) is stuck under the thumb of her pro-wrestler father “Goliath” Jackson; Stacey and Dawn (Kimmy Gatewood and Rebekka Johnson of comedy troupe The Apple Sisters) transform into the geriatric tag-team duo The Beatdown Biddies; and Tammé Dawson (Kia Stevens, a real-life WWE wrestler) grapples with the racial politics of playing the “Welfare Queen.”

With hilarious attention to period details (feathered hair and mom jeans abound), a deep affection for the subject matter, and a loose improvisational feel, GLOW already ranks up there among the top in Netflix’s ever-expanding line-up of original content. Oh, and did I mention the cast raps? For better or worse, everyone rapped in the 1980s (even the Chicago Bears) and the GLOW girls are no exception. In the series, English airhead Rhonda/“Britannica” (Kate Nash) pens a few lines that not only embody the camp sensibility of the “sport” but reposition the whole silly enterprise for our more enlightened times:

G.L.O.W., G.L.O.W.
That’s the name
Women’s wrestling is our game
If we play rough, please don’t blame us
Our style is wild
And you know you can’t tame us.

Both the first season of GLOW and the documentary that inspired it are now streaming on Netflix.