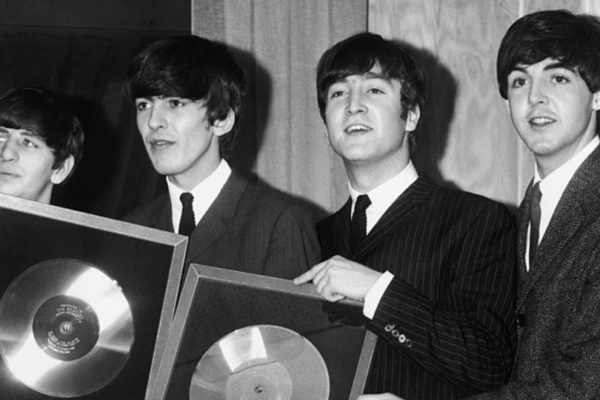 When the Beatles invaded the US in 1964, the 45 RPM record was the dominant music format. Yes, LPs played a big role in record sales but 45s truly drove music sales back then. Not surprisingly, The Beatles were among a very elite group of artists who not only scored hits with one side of their 45s but sometimes with both. The Billboard record charts at the time were based on sales, which of course would’ve been the same for both sides, but other factors, including radio air play and listeners’ requests, helped distinguish one side’s chart position from the other. Here are the nine Beatles 45s that featured songs on each side that reached the Billboard Top 30. Records are listed chronologically.

1. “I Want to Hold Your Hand” / “I Saw Her Standing There”
The single “I Want to Hold Your Hand” introduced millions of fans to the Fab Four stateside. Yet the flipside, the more hard rocking “I Saw Her Standing There,” didn’t do so bad either, climbing as high as number 14. This record included a unique picture sleeve of the band huddled together in their collarless suits with McCartney holding a cigarette. Following the anti-smoking fervor in the US, a subsequent 1984 reissue airbrushed the cigarette out. (Released December 26, 1963)

2. “Love Me Do” / “P.S. I Love You”
Released on Tollie Records, a subsidiary of Chicago’s Vee-Jay Records, “Love Me Do” (number one) and “P.S. I Love You” (number ten) were the first two singles The Beatles recorded with that studio genius Sir George Martin. Both songs feature some of the simplest arrangements The Beatles ever recorded and are excellent examples of the early Mersey sound. (Released April 27, 1964)

3. “Matchbox” / “Slow Down”
This two-sided hit is unique in that neither side was written by The Beatles. Two covers capable of charting on Billboard? Was there nothing The Beatles couldn’t do? “Matchbox,” which peaked at number 17, is a Carl Perkins arrangement of an old blues tune and the raucous “Slow Down,” which made it all the way to number 25, was recorded originally by Larry Williams who also wrote “Dizzy Miss Lizzie.” (Released August 24, 1964)

4. “I Feel Fine” / “She’s a Woman”
The number one hit “I Feel Fine” is one of the band’s first songs to deliberately use feedback with Lennon’s guitar vibrating after Paul plucks a note on the bass. As for its number four flipside, “She’s a Woman” features McCartney doing a very Ray Charles-influenced vocal. (Released November 23, 1964)

5. “We Can Work It Out” / “Day Tripper”
This pair came out around the same time as Rubber Soul and boy is it a good one! The top-of-the-chart single “We Can Work It Out” includes a couple of tempo changes that enrich the song’s emotional appeal, while “Day Tripper,” which made it as high as number five, starts off with one of rock’s best riffs. (Released December 6, 1965)

6. “Paperback Writer” / “Rain”
The summer of 1966 began with another number one rocker, “Paperback Writer” but it’s really Side B, the less successful “Rain” (which only got as high as number 23) that truly foreshadows the foursome’s future experimentation in the recording studio via a reversed tape segment at the end, and Lennon’s exploration of darker subject matter. Ringo’s drumming is superb, too. (Released May 30, 1966)

7. “Penny Lane” / “Strawberry Fields Forever”
As amazing cast-offs go, these can’t be beat. (Both were intended to be on Sgt. Pepper’s…)
CultureSonar’s own Scott Freiman does an interesting analysis of McCartney’s compositional approach for chart topper “Penny Lane.” Considering its use of a mellotron, backward tape sequences, and cellos, we’d also love to hear his take on “Strawberry Fields Forever” — Lennon’s dreamlike recollection of a fair at an orphanage (outside of Liverpool) that he attended every summer with his Aunt Mimi. This two-sided hit was remixed and re-issued for Record Store Day 2017. (Released February 13, 1967)

8. “Hey Jude” / “Revolution”
“Hey Jude” is the biggest hit the Beatles ever had on the Billboard charts staying at number one for nine weeks! Written by McCartney for John’s son Julian, the anthemic refrain can be heard as a healing respite from the social unrest of the late 1960s. That political interpretation especially makes sense given “Revolution” — a Chuck Berry-influenced rocker that peaked at number 12 — also addresses the social issues of its time. “Don’t you know, it’s gonna be all right!” (Released August 26, 1968)

9. “Come Together” / “Something”
These two are from Abbey Road with both receiving quite a bit of airplay. (“Come Together” hit number one; “Something,” number three.) But what might be most noteworthy here is that “Something” is the only George Harrison song on this list. Frank Sinatra once called it “the greatest love song of the past 50 years.” Who are we to argue with the Chairman of the Board? (Released October 6, 1969)

4 comments on “Twice Hit: The Top 9 Double-Sided Singles of the Beatles”