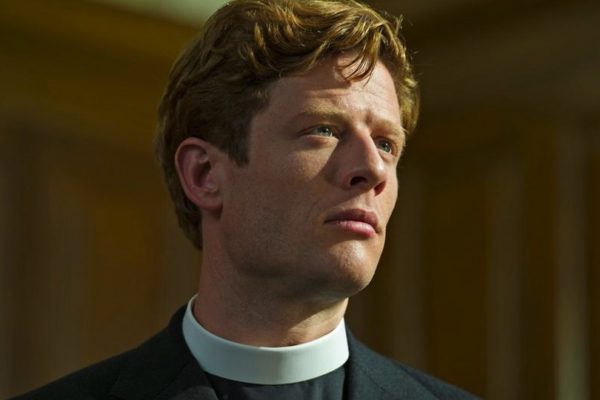 Sundays are about to be rescued once again by PBS’s Masterpiece. Many of us have been dealing with Downton Abbey withdrawal since the series made its final bow on March 6, but the start of a second season of Grantchester should assist in the detox. Grantchester doesn’t have the glitz, glamour, or huge ensemble cast that Downton did, but it does have great characters, intriguing stories, and wonderful writing. The show takes place in the 1950s in Grantchester, an idyllic village in Cambridgeshire, England very near to Cambridge (and its famous university). [amazon template=left aligned image&asin=B00R041FXA]At its heart is a vicar named Sidney Chambers, a complicated and curious young man who gets sucked into duties well outside the realm of the church. In the very first episode, he is told by a parishioner that a man thought to have committed suicide was likely murdered. Canon Chambers reluctantly begins to piece together what happened, enlisting the help of Inspector Geordie Keating, a local law enforcement officer. Ultimately, the two bond over backgammon and become friends, solving not just this crime but other intricate murder mysteries as well.

James Norton (who starred in the recent adaptation of War and Peace) does a brilliant job playing priest and part-time detective Sidney Chambers. His character is smart but vulnerable, dutiful but flawed – yet Norton always has us rooting for him. Chambers is still trying to find his way when it comes to his career and women, all the while still struggling with the scars of battle after fighting in World War II. His love of jazz, whisky, and his pup named Dickens all help him to cope with these inner demons.

The best scenes of the series are between Norton’s priest and Inspector Keating, played by the perfectly cast Robson Green (Wire in the Blood). The two are certainly an unlikely pair, but they are delightful together. And the dynamic between them is compelling – the police officer (a surly, cynical one at that) who follows the rule of law and a man of the cloth who gets his guidance elsewhere. Of course, these two ideologies clash at times, but the characters are both wonderfully human and so is their relationship.

[amazon template=right aligned image&asin=B014E1TJV6]Season two picks up 18 months after the events of the final episode of season one and promises to bring more crime and more sleuthing. I don’t want to give any details away, but rest assured if you are new to the series, you shouldn’t have too much trouble catching on. The first season only had six episodes (each an hour long), so it’d be easy to catch up if you’d like. You can also read the books that the series is based on. They are written by James Runcie, the son of the former Archbishop of Canterbury. The TV show doesn’t exactly follow the same plots, but some are similar and all are an enjoyable read (so far, there are five novels in The Grantchester Mysteries series).

So, if you are looking for another wonderfully-produced, well-acted and interesting period drama to fill that Downton void, look no further than Grantchester, airing Sunday nights at 9 p.m. from March 27 through May 1 (and stay tuned to PBS after Grantchester for the final season of Mr. Selfridge – another excellent show that might be worthy of a post some other time).

PS. While we’re on the subject of great period pieces, the aforementioned War and Peace starring James Norton is well worth your time. Read more about it in our post Better than the Cliffs Notes: War and Peace on Cable. And for a page turner from the era of the Crawley family, check out Great Houses and Not-So-Great Families Revisited.

0 comments on “Did You Hear the One About the Vicar and the Detective?”