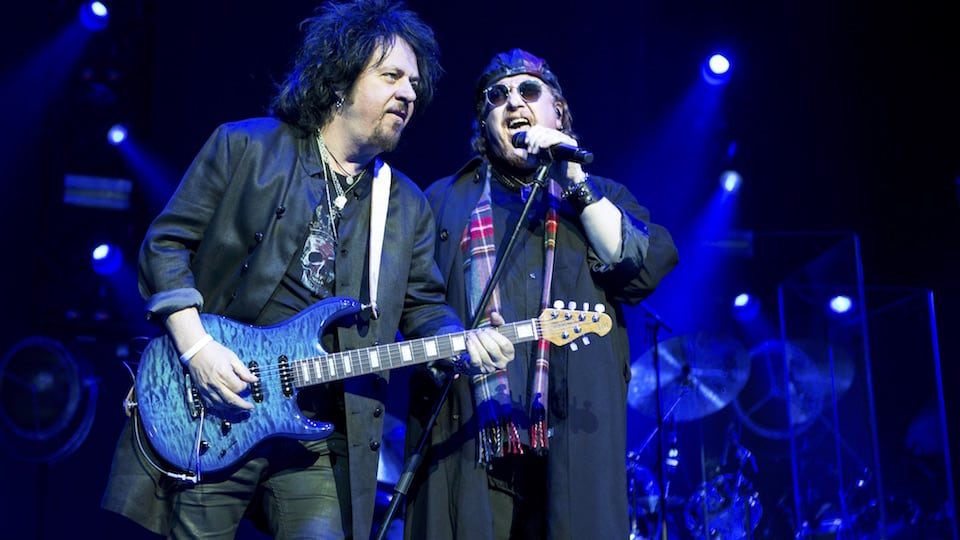 You’ve seen it. You’re at a concert and the person next to you knows every word. To every song.  And while we all can marvel at someone’s ability to perfectly lip sync an entire concert, there is solace in knowing that there will always be a couple of songs in the set that we know by heart too. There are some songs you know, and there are some songs everyone knows, a song that somehow weaves a thread through the audience and pulls tight. Most bands fall short of that measuring stick. Other bands have one or two songs like that. The band Toto has a couple such songs. Which one are you thinking of? We’ll come back to that in a minute.

Toto is in the middle of a massive North American tour celebrating their 40th anniversary. So fittingly, while their 40 Trips Around the Sun tour winds its way around the country, it also brings with it a new greatest hits compilation of the same name. Released in February, the double LP features every Toto song you know, plus three newly recorded tracks. With a catalog that has sold over 40 million albums worldwide, the band has plenty of material to press on vinyl. And although the multiplatinum Toto IV may have been the peak of their dominance on the Billboard charts, it’s the international charts that have made Toto a true band of the people. The reason for that, probably more than anything, is the group’s musicianship.

Toto emerged from a crowded ‘70s music landscape when it formed all the way back in 1976. Original members David Paich (keyboards, vocals), Jeff Porcaro (drums), David Hungate (bass), Steve Porcaro (keyboards, vocals), Bobby Kimball (vocals), and Steve Lukather (guitar, vocals) were sought-after session musicians and appeared on albums cut by Steely Dan, Seals & Croft, and the like. It’s the band’s roots in unparalleled musicianship that gave Toto its start and remains its core tenet today. Although the band’s lineup has evolved over the years, the attention to musical detail has remained constant. According to the band’s website, individual band members can be heard playing on an astonishing 5000 albums that combined have sold a mind-blowing half a billion albums. Think about that for a moment. Top-notch musicians are a sought-after bunch.

When the band rolled through Stubb’s Waller Creek Amphitheater in Austin, Texas on a scorching hot summer evening, an enthusiastic crowd stood shoulder to shoulder to see that musicianship on display first hand. Toto delivered. The current touring lineup showcases eight musicians on stage, which is a horn section away from jam band status. Duel guitarists and drummers help craft Toto’s signature sound. But make no mistake, Steve Lukather’s guitar-playing is the straw that stirs Toto’s musical cocktail. Toto may be known for the mellow sounds of “Rosanna” and “99,” but Lukather’s guitar on “Hold the Line” and “Kingdom of Desire” have an edge that proves he can go full rock star. Austin’s two-hour-plus set mixed what you’d expect with a few absolute delights. “Jake to the Bone,” a nearly eight-minute instrumental, gave everyone on stage a chance to showcase their talents. “Human Nature” penned by Toto’s own Steve Porcaro and recorded by the band with Michael Jackson’s from the Thriller album delighted everyone. And then of course, there is “Africa.”

“Africa” is Toto’s only Number One hit. It’s one of those songs we all know, and for good reason. It’s been covered by scores of bands, and just recently thanks to a push from social media courtesy of the band Weezer. Weezer’s version became one of their highest charting singles ever. It reached Number One on Billboard’s alternative rock chart and Number Seven on the U.S. rock chart. “Africa” is one of those songs that no longer belongs to the band that made it famous. It belongs to the people. “Africa” pulls the concert-going public together like few songs can. And on a dreadfully hot night at Stubb’s, the people raised their arms, turned on the video recorders on their cell phones, and essentially became Toto’s accompanying choir section, several thousand strong. In a thank you nod to Weezer, or perhaps not to be outdone, Toto ripped off a rousing cover of Weezer’s “Hash Pipe” to close out the set with Lukather himself noting that the band had been smoking hash since before the guys in Weezer were born. Well played, Toto.

Toto’s 40 Trips Around the Sun tour continues with stops in the Midwest and east coast until mid-November before it picks up again next year in New Zealand. Pick a town and become part of the band’s backing choir.