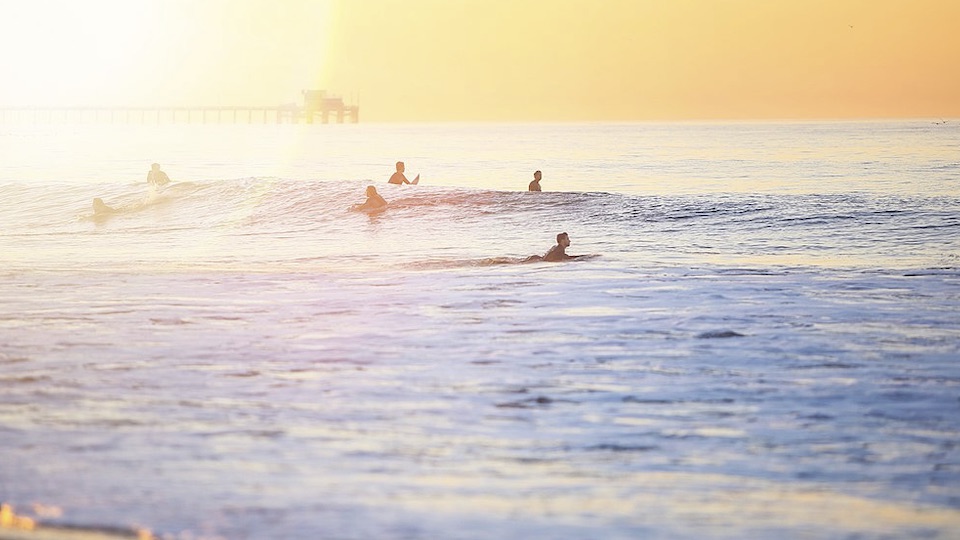 You know you’re in good literary hands when no less than Stephen King calls music journalist and author Joel Selvin “a rock legend.”  In his new book, Hollywood Eden: Electric Guitars, Fast Cars and the Myth of the California Paradise, Selvin dedicates it to the origins of California “Surf Rock.” While these tunes may skew a bit naive today, they possess far-reaching tentacles that have informed such classic rockers as The Beach Boys, The Byrds, The Mamas and The Papas —  even The Beatles.

Back in 1958, there was a musical movement afoot in California that began in local high schools, with students singing light harmonies in between classes and working up new tunes in their parents’ garage. Drummers began plying their solo magic, causing dance outbreaks in the halls. “Surf Rock” honors the beach life, a certain innocent naughtiness …and, eventually, surfing itself.

Hollywood Eden presents an array of vibrant historical moments from a time we’ll never see again. It opens with musical duo Jan & Dean in the most adolescent of scenarios –  raising a little mild hell in the gym showers of University (Uni) High in 1958. Jan Berry was the rogue, a rich kid with a big spirit and propensity for trouble. Dean Torrence was his easygoing sidekick. They also had a way with dual harmony and worked their way to the top through small-time gigs and word of mouth, being discovered by producers, agents, and DJs, some honorable, some utterly sleazy.

Jan & Dean may have hit the ground running, but Selvin makes clear that the combination of youthful callowness and sudden fame serves few people well. Still, they led the global embrace of California living, and their engaging, boppy tunes evolved into more introspective music over time. The Beach Boys, The Byrds, and The Mamas and the Papas (among others) kept the delicious harmonies but worked their hallucinogenic drug use and darker life visions into the mix.

Hollywood Eden spins a wide-ranging narrative in colorful chapters that could each stand on their own as vivid time capsules. It’s not strictly linear, but the chronology asserts itself over the course of the book as the reader takes in the totality of these quirky years.

Uni High itself serves as one of the principal characters. This was, after all, the high school that matriculated the likes of oddball record producer Kim Fowley, legendary drummer Sandy Nelson, and Nancy Sinatra, whose track “These Boots are Made for Walking” finally liberated her from the coiffed, virginal rep she was stuck with as Frank Sinatra’s daughter. Jill Gibson went from being Jan’s high-school squeeze to a temporary replacement for Michelle Phillips when she was kicked out of The Mamas and the Papas.

A still-creepy but less jaded Phil Spector shows up as a young music producer, a difficult, eccentric genius who whipped up magic inside the studio as he cranked out a lot of hits (and a few devastating misses) as his madness progressed.

Hollywood Eden is replete with great trivia. (The Chairman of the Board liked “the boots song,” if not the naughty way his daughter delivered it! Kathy Kohner, another Uni High alum, became the iconic character “Gidget,” which was a merging of “girl midget”!)

And we get an inside view of the music industry before it was completely taken over by corporations – a mixed bag of opportunity, tender egos, and innocence.

The framework of Hollywood Eden begins and ends, poignantly, with Jan & Dean, from their feisty adolescence to a painful conclusion that showed the toll that early stardom can take. Selvin has shown his journalistic chops and researched (in part through comprehensive interviews with surviving real-life cast members) a period of musical history that’s both fascinating and cautionary.

3 comments on ““Hollywood Eden”: Tracing the Rise of Surf Rock”