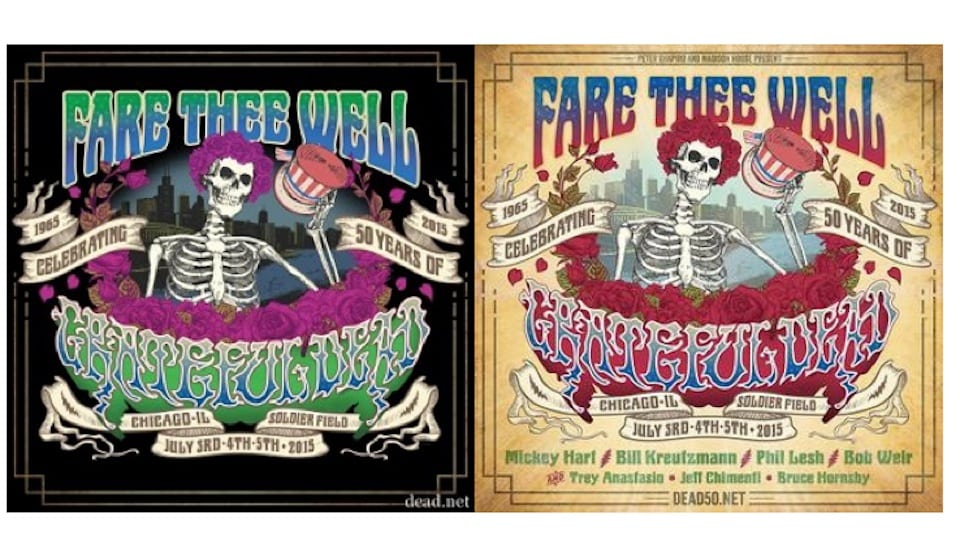 Even hardened Deadheads may by now have made peace with the fact that the Grateful Dead’s glory days are behind them. Some peg the band’s senescence to the 1995 death of magister and lead guitarist Jerry Garcia. Some point to short-lived efforts to continue The Long Strange Trip with ensembles such as Furthur, The Other Ones and – simply – The Dead. Or to the entropic effect of various band member solo efforts: Phil Lesh (Phil & Friends), Bob Weir (Bobby and the Midnites, among others) and drummer Mickey Hart (if it makes noise when struck, record it and perform it).

This summer’s Fare Thee Well tour was designed as a celebratory capstone to 50 years of music-making, touring and messing with people’s heads. Announced as the last time the original members would play together, this 21st century rendition of the Summer of Love sprawled over five performances in two cities in June and July. Digging deep into their treasure chest of a repertoire, the band played 82 songs, only two of which repeated (notably the anthemic crowd-pleaser “Trucking”).

To quote Mark Twain, “Reports of my death have been greatly exaggerated.” Buoyed by Fare Thee Well’s commercial success (a package of three Soldier Field shows was marketed on StubHub for $116,000), the band reconsidered its inclination to put a hard stop to touring and booked a dozen fall 2015 dates without bassist Phil Lesh, whose Phil & Friends already had performance commitments. Whether there’s irony or intention in the new lineup’s name, Dead & Company, is open for discussion.

But the Dead were always about something bigger than the music. The legendary parking lot culture was built on sharing (food, shelter, comestibles and combustibles) and respect for differences. Especially in the early Haight days, the band played innumerable free and benefit concerts to raise funds for community organizations. Later, the Grateful Dead’s philanthropic arms, the Rex and Unbroken Chain Foundations, channeled profits to projects in the arts, sciences and education. And sixteen non-profits, including Oxfam, Hidden Wings School and the Rainforest Action Network, benefited from auctions of Fare Thee Well tickets.

There’s now a new generation of Deadheads, a new charitable environment and a new generation of musicians building on the multifaceted Grateful Dead legacy. Far from the ‘far out’ zonkedness of their predecessors, some fans are harnessing the power of the music and movement to important social issues and causes, ranging from voter registration to the environment.

One of the more ambitious efforts is headed by Rob Rosman, a New York attorney and advocate for teens and young adults living on the autism spectrum or otherwise differently abled. His Tree of Life Development Organization is building a community of new residences in upstate New York designed especially for young adults who ‘age out’ of care communities available to those under 21.

Among other initiatives tapping into the huge potential of the Dead’s music and culture, Rosman and colleagues are hosting a benefit concert on Sun., Nov. 8, 2016 at The Hall in Brooklyn. Most performers have a Grateful Dead provenance. Scott Metzger is a jazz and jam band vet, having played with legends like Moby, Warren Haynes and John Mayer (performing now with Dead & Company). Alex Nelson (Wolf!) sits in regularly with the Bay area’s Terrapin All-Star Band . And Midnight North is fronted by none other than Phil Lesh’s son Grahame, a successful musician in his own right. With pedigrees like these — and two Dead-legacy bands now touring — rumors of guest performers run the gamut Net proceeds will support not only these much-needed housing and community initiatives but also job training, education and other programs necessary to help capable young adults become and remain largely self-sufficient.

Great music. A great reason to get out of the house on a Sunday night. And the kind of important cause that the Grateful Dead supported so thoroughly right from the start.

0 comments on “Howling at the Moon – and a Lot More”