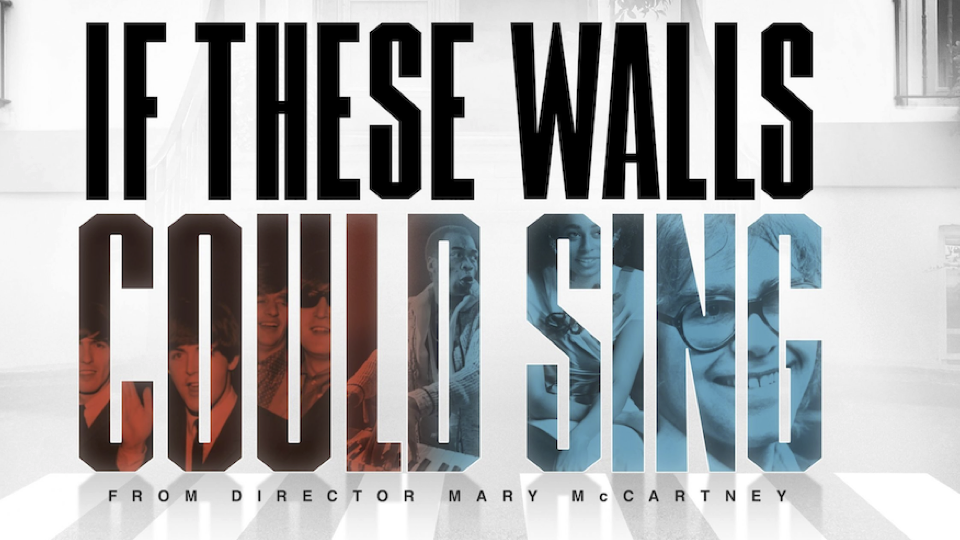 When you think of recording studios with a storied past, a few quickly come to mind – “Sun Studios”, which brought fame to Elvis Presley, Jerry Lee Lewis, Roy Orbison, and Johnny Cash.  Or “Muscle Shoals”, famous for Lynyrd Skynyrd, the Rolling Stones, Bob Seger, Paul Simon, and The Black Keys.  And “Sunset Sound Recorders”, which hosted Disney Movie Music Production, Led Zeppelin, The Doors, and The Beach Boys.  And finally, “Motown”, responsible for an entire genre of musicians, including Marvin Gaye, Stevie Wonder, Diana Ross and the Supremes, and The Jackson 5.  But perhaps the most famous would be “Abbey Road Studios.” Mary McCartney (daughter of Paul) has done a new documentary If These Walls Could Sing, that takes us through a brief history of the facility.

Abbey Road Studios was originally a nine-bedroom townhouse that was acquired by Gramophone (which became EMI) in 1929.  The building was located on the front of a large lot so three multi-purpose studios were constructed (Studio 1, 2, and 3) and the existing building was converted to administrative offices.  In 1931, the first recordings were done on vinyl discs for the London Symphony Orchestra. During WWII, it was used by Glenn Miller for his famous wartime releases while he lived in London. But it wasn’t until Cliff Richard (and The Drifters) recorded a debut single called “Move It” in August 1958, that Abbey Road Studios began to gain recognition.  Side note: this song is credited as being the first authentic rock and roll song produced outside of the US.

If These Walls Could Sing quickly guides us through these beginnings, interviewing Cliff Richard, who extolls what a modern facility it was, and how Abbey Road kicked off a nearly six-decade spate of success for him.  Of course, we eventually hear about the origins of The Beatles’ unprecedented success, partly based on the advanced recording equipment at the studio and the best-in-the-business staff employed there.  Sir Paul tells us how he recorded “Black Bird” and demonstrates that the tick-ticking noise heard during the song was his toe-tapping on the wooden floor to keep time. Giles Martin (Beatles’ producer George Martin’s son), takes us through his father’s work with the group, and how the studio engineers always delivered on the odd requests the band would make, including building unique equipment from scratch, turning dials beyond their normal use, or connecting diverse equipment.

Other artists interviewed about Abbey Road during the 1960s include Roger Waters and David Gilmour (Pink Floyd), and Elton John, who played piano there as a studio musician early in his career.  Ring Starr pops up (as he always does) to talk about the great time he and the remaining Beatles experienced while recording Abbey Road (the album) and Let It Be, and how it was probably the most fun he has ever had recording any material.  Jimmy Page describes his experience at Abbey Road as a very young session guitarist, specifically when he worked with Shirley Bassey on the title song of the James Bond movie Goldfinger.  Both he and Bassey recount how he witnessed Bassey having to hold that last note of the closing lyric “he loves g-o-l-d—” for an extraordinary length of time while waiting for the movie credits to scroll off the screen, causing her to almost pass out!

By the early 1970s, after the breakup of The Beatles, other nearly-as-good and less costly recording studios had sprung up around London.  The studio changed hands and at one point, new ownership was presented with the option to replace it with a parking garage or turn it into an apartment building.  Thankfully that did not happen and instead, Abbey Road was updated to facilitate film scoring.  John Williams is interviewed and describes how a partnership with the studios was created, and this led to the use of Abbey Road for the soundtrack for the Star Wars episodes, the Indiana Jones series, and others.  It became William’s favorite studio as it was equipped to handle a full symphony orchestra while viewing the movie to use as a timing guide.

The documentary includes interviews with more modern musicians such as the Oasis brothers (Liam and Noel, separately of course), American-British singer-songwriter Celeste, and award-winning British cellist Sheku Kanneh-Mason.  The latter two perform for the episode as well.

All the artists interviewed remark about the unique audio quality that Abbey Road seems to possess.  The inside walls have not been repainted for fear of changing anything that contributes to that uniqueness.  John Williams suggests that it provides just enough wetness (reverb) to the sound to give the listener the feel of a large room but also seems to retain the crispness of the musical instruments so the sound isn’t mushy.  Paul and Ringo discuss the diversity of equipment and instruments that could be found there; they would often wander the studios and try to locate various instruments for consideration in their songs.  Some were unique or cutting edge (Mellotron), others were vintage (the old stand-up piano he used on “Lady Madonna” and others).

The documentary runs for about 90 minutes but still seems a bit rushed and becomes a 50,000-foot high-speed, with too much time spent on Beatles’ songs (for example) that we’ve heard about before and not enough time on what made/makes the studio unique.   For example, a recurring theme is the mention of the special engineers there (called “boffins” by various artists interviewed), some employed until very recently, and yet not much time is spent on them.  The same goes for the unique equipment that contributed to the experimental music of the time.  It’s mentioned but not explored.  Mary McCartney has suggested that she has additional material that was cut, so it could be that someday we are gifted with the full version of what she captured.  If that occurs, it will finally give Abbey Road the appropriate treatment and appreciation.

“If These Walls Could Sing” appears on Disney+.

6 comments on ““If These Walls Could Sing” Explores Abbey Road”