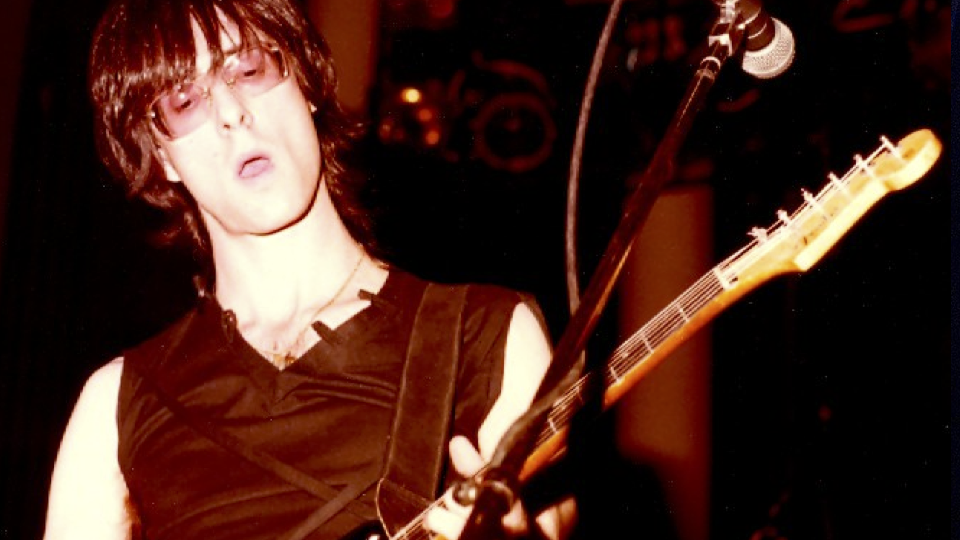 Lenny Kaye is an enthusiastic advocate of rock and roll in all its forms, heralding it for at least half a century. He wrote a review of the Grateful Dead’s album Live Dead for Rolling Stone in 1970, writing that it is likely where rock would be in five years. In 1972, he ensured that the garage bands of the mid-1960s would be remembered, gathering the songs for the Nuggets compilation.

In 1971, he became the lead guitarist for Patti Smith, overseeing her transformation from beat poet to spokesperson on the power of rock and roll.   For the past few years, he’s been a nighttime D.J. on Little Steven’s Underground Garage, and late last year he wrote a book called Lightning Striking, Ten Transformative Moments In Rock And Roll.

In it, Kaye highlights ten places where a series of events developed to create a cultural phenomenon eventually exploding and transcending the place where it was created. Whether it’s Memphis in 1954, Liverpool in 1962, or Seattle in 1992, it’s based on a concept called “scenius” conceived by producer Brian Eno whereby a phenomenon is created not by one person but rather by a convergence of artists, hustlers, oddballs, and fans. The book is painstakingly detailed, highlighting not only the main artists but other players on the periphery.

For example, in writing on Memphis, Elvis Presley and Sam Phillips are given their due but artists like Harmonica Frank and independent label owners and hustlers like the Baharis brothers are also featured. Similarly, when discussing Liverpool in the early 60s there of course is talk of the Beatles and Brian Epstein but less renowned players, like insider Joe Meeks who produced the hit instrumental, “Telstar” and “Have I The Right?” by the Honeycombs are featured.

Kaye often puts himself in the midst of the scenes, describing how watching artists performing on the TV dance shows from Philly in the 50s and early 60s helped the music come alive for him and the transformation he shared with so many others watching the Beatles on the Ed Sullivan Show.  He also gives firsthand accounts of seeing bands like Big Brother and the Holding Company, the Jefferson Airplane, and the Quicksilver Messenger Service, featuring guitarist John Cipollina, in the ballrooms of San Francisco, after driving out west with a buddy to experience the Summer of Love.  Kaye is the only rock critic I can recall who shows equal appreciation for the Dick Clark dance scene of the early 60s and the psychedelic groups emerging later in the decade.  He also mentions his single, “Crazy Like a Fox,” released under the pseudonym “Link Cromwell”  in 1966, with the help of his uncle in the music business.

He was a participant in the New York punk scene that sprung up in the 70s, playing at CBGBs, with the Patti Smith Band, alongside Television, the Talking Heads, and The Ramones. He remembers Patti Smith mixing covers of the Velvet Underground’s “Real Good Time Together” and The Marvelette’s “The Hunter Gets Captured by the Game” with her beat generation-inspired originals. He looks back with wonderment on playing 150 seat venues in the early 70s then performing before 70,000 in Italy later in the decade.

The last chapter is set in Seattle in 1991 with the beginning of grunge, a garage band genre a generation removed from the bands highlighted on the Nuggets collections.  Like in the other chapters, the bigger names like Pearl Jam, Nirvana, and Alice in Chains are not ignored but lesser-known acts like the Melvins are given equal time.  He calls the heroin-induced darkness of the scene, a “downer miasma.”  He exalts Eddie Vedder for overcoming it, praising his humanitarian spirit writing “may it be long and fruitful.”

There is a heightened level of recall in the book that can be daunting whether he is delineating the scenes in the aforementioned cities, or in New Orleans, Detroit, and London.  I imagine he wants to be sure the whole story is told.  While that can be challenging to the reader, his unpretentious intellectualism and passion for music and the “scenius” that surrounds it, is infectious.  At several points, he ponders whether one chooses the music or whether the music chooses them.  For anyone pondering the same question while plugging in their guitar, counting all the bands you have seen, or wondering whether there is enough time to listen to all your records, this book is for you.

2 comments on “It Takes A Village: Lenny Kaye’s 10 Moments In Rock”