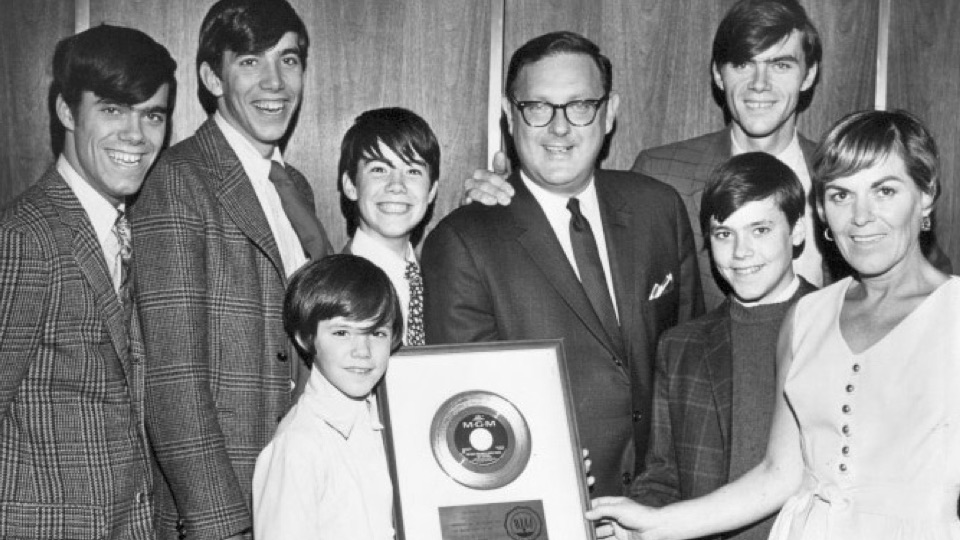 One of the biggest pop hits of 1967 was “The Rain, The Park, and Other Things,” by The Cowsills. This lighter-than-air tune about a young man smitten with a “flower girl” floated up to number 2 on the Billboard charts thanks to the group’s gorgeous harmonies, and a chorus that simply begged you to sing along. The song was the first of several hits for the band, a Rhode Island-based family who were the real-life inspiration for television’s pop music group The Partridge Family. Several of the Cowsill siblings performed together at local events and venues throughout their younger years. By 1965, the band’s lineup featured brothers Bob on guitar and organ, Bill on guitar, Barry on bass, and John on drums. Inspired by The Beatles, they longed to be a rock and roll band, but fate had other plans for The Cowsills. Despite the fact that the real-life story of the group has some darker moments than the sunny sitcom adventures of the fictional Partridges, the band made a lot of great pop music together. Here are a few of their most memorable songs.

The Rain, The Park, and Other Things

Early on in their career, the group recorded a few singles that didn’t really make waves, but they continued performing live on a regular basis. At one of their shows, The Cowsills were spotted by a staffer from the Today show. They subsequently made an appearance on the program, which led to the group being signed by Mercury Records, who dropped them after releasing several unsuccessful singles. Writer-producer Artie Kornfeld (later a co-creator of the Woodstock festival) still had high hopes for the band, and in late 1966, The Cowsills recorded “The Rain, The Park, and Other Things,” written by Kornfeld and Steve Duboff. During the sessions for the song, he suggested the group add backing vocals by their Mom, Barbara Cowsill, to the tune. The Cowsill brothers weren’t too thrilled to have their Mom join what they hoped would be a Beatles-like rock and roll band, but the single became a smash, and was soon followed by the band’s self-titled album on MGM Records, also produced by Kornfeld.

The Cowsills were riding high, and as the group began work on their next record, We Can Fly, their lineup expanded to include their sister Susan. Soon, the band was everywhere, performing live concerts, appearing on television series such as The Ed Sullivan Show, The Johnny Cash Show, and The Tonight Show, and even headlining their own variety special, A Family Thing, hosted by Buddy Ebsen (!) The popular Cowsill siblings were featured regularly in teen magazines such as Tiger Beat, and the group even had their own comic book. The soaring title track for We Can Fly, a sort of Fifth Dimension meets The Mamas and The Papas style tune, became the group’s second hit, reaching number 21. The album was produced by Bill and Bob Cowsill, and featured a number of songs co-written by the siblings, including “In Need Of A Friend” and “Mr. Flynn.”

The group’s third album for MGM, Captain Sad and His Ship of Fools was once again produced by Bill and Bob and included more songs penned by the duo, such as “Newspaper Blanket,” in addition to tracks like “Who Can Teach a Songbird How To Sing,” co-written by Graham Nash, and “Can’t Measure The Cost Of A Woman Lost,” from songwriter David Gates, who later became a founding member of Bread. The big hit from the disc was “Indian Lake,” an infectious piece of bubblegum pop written by Tony Romeo and produced by Wes Farrell. These were the men behind “I Think I Love You,” the first hit for The Partridge Family, the television band loosely based on The Cowsills. Despite the fact that the band wasn’t too keen on the song, “Indian Lake” hit number 10 on the charts.

The band’s next hit single began with a request from an unlikely source;  veteran writer-producer and comedian Carl Reiner. In 1969, Reiner was helping to put together a TV special called The Wonderful World of Pizzazz. The show (co-hosted by Reiner) was a look at current trends in fashion and music. Reiner thought it would be a cool idea if the clean-cut Cowsills performed the theme to Hair, the popular counter-culture stage musical, on the show. The band spent a couple of days in the studio, with Bill and Bob crafting and arranging their fantastic version of the song, which the group lip-synced on the TV special while outfitted in some outrageous wigs. At first, MGM didn’t want to release “Hair” as a single, but the label eventually relented, and the song became a huge hit, climbing all the way to number 2. The year 1969 also saw the group record the theme for the TV series Love, American Style, which in subsequent seasons of the show was performed by The Ron Hicklin Singers, who ironically, also provided the background vocals for many studio recordings by The Partridge Family!

While The Cowsills enjoyed a great deal of success, there was a dark side to the smiling faces fans saw during their TV appearances and live shows. Their father, William “Bud” Cowsill, an alcoholic, was verbally and physically abusive to the family. He also managed to alienate some of the band’s music industry connections due to his unflinching nature. Despite these behind-the-scenes struggles, The Cowsills continued to create compelling music. Their 1970 release II x II charted a change in direction for the band, which found them dipping into the folk and country-rock genres on tracks such as the lovely, acoustic-tinged “Don’t Look Back” and “Start To Love,” as well as their version of the often covered tune “Silver Threads and Golden Needles,” produced by noted session player Waddy Wachtel. The band rocks out on “Anything Changes” and explores spiritual and religious themes via the offbeat “The Prophecy of Daniel & John the Divine,” and the title track.

Is It Any Wonder?

While the band’s classic lineup ceased recording and touring after the 1971 album On My Side, several of The Cowsills continued working in the music business. Susan has performed as a solo artist and a member of bands such as indie music favorites The Continental Drifters. John has been a member of The Beach Boys touring band, and Bill recorded two albums with the alt-country band The Blue Shadows. The siblings have regrouped to tour and record in various configurations throughout the years. One of the best songs from those reunion projects, “Is It Any Wonder?” a terrific power-pop tune, is included on the band’s 1998 album Global, featuring Bob, Paul, John, and Susan.

Bill, Barry, and Richard, as well as parents Barbara and Bud, have all passed away in the intervening years. Susan, Bob, and Paul (sometimes joined by John) continue to perform together and celebrate the music of The Cowsills, most recently as part of the Happy Together tour, alongside other 1960s hitmakers like The Association and The Turtles.

Photo: The Cowsills in 1967 with their Gold Record for “The Rain, The Park, and Other Things” (public domain)

5 comments on “The Cowsills: Not As Sunny As They Seemed”