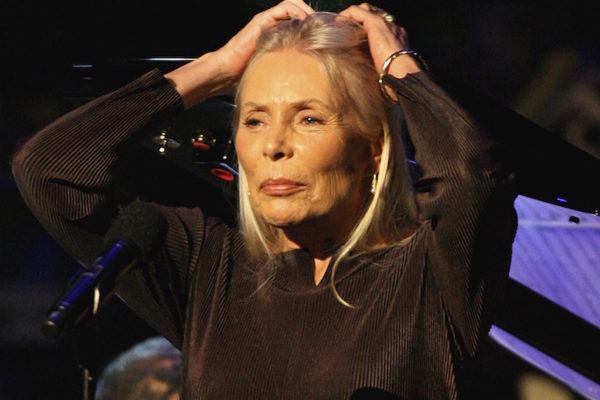 Editor’s Note: This has been our most popular post of the year, so it seemed a good time to have another look…

You’d be hard-pressed to find a singer-songwriter who combined lyrical insight with musical adventurousness better than Joni Mitchell. She began her mercurially brilliant career as just another strummer of acoustic guitar, albeit one with piercingly intelligent songs and a wondrous voice. But as Mitchell progressed, she pushed the boundaries of her songwriting with more fearlessness than any of her peers. At her peak in the mid-1970s, a Joni Mitchell album could mesmerize an audience like very few other pieces of art. For about a decade, there was no such a thing as a “bad” Joni Mitchell song, so picking out a “ten best” is no easy feat. Still, we’ll give it a go.

1. “Cactus Tree” (1968)
Mitchell’s 1968 debut Song to a Seagull was pretty straightforward musically, but the immense gifts she possessed were evident. The closing track on the album is a stunner, an ode to a girl who manages to love a whole host of suitors without belonging to a single one. Considering Mitchell’s own romantic reputation around that time among the California rock elite, you can read it as a kind of explanation for why she couldn’t give any of them “eternity.”  Not when she was “so busy being free.”

2. “The Arrangement” (1970)
Little by little, Mitchell began to incorporate more piano into her material, usually to haunting effect. She also showed that she was more than happy writing melodies that strayed to unexpected places, concerning herself more with emotional expression than traditional pop song structures. As a result, songs like this one from her 1970 album Ladies of the Canyon: a sad portrait of a man whose identity is swallowed by routine, which digs a little deeper than your usual singer-songwriter fare.

3. “River” (1971)
You can make a case for putting every one of the songs on Mitchell’s 1971 masterpiece, Blue, on this list. It’s the album where both her songwriting confessions and musical ambitions find an absolute sweet spot. You’ll hear this song played at Christmas, but it truly transcends all of that. It’s a breakup song, and Mitchell deserves points for her self-awareness at her role in it all. But you’ll still be on her side by song’s end, in part because of one of the most soulful vocal performances in her canon.

4. “A Case of You” (1971)
The fact that “A Case of You” follows hot on the heels of “River” on Blue should tell you all you need to know about the potency of that album. Mitchell’s willingness to try offbeat instrumentation, like the dulcimer she uses here, often lent her songs a kind of strange fascination. James Taylor helps out on the guitar on this, perhaps her best torch song. You don’t need to know which bold-faced name inspired it (both Graham Nash and Leonard Cohen have been suspected) to appreciate its heartbreaking prettiness.

5. “For the Roses” (1972)
The For the Roses album, released in 1972, feels a little bit like a holding pattern before Mitchell really kicked into gear again with her next three albums. The album did contain her first chart success, “You Turn Me On, I’m A Radio,” as well as the title track, which, ironically enough, takes aim at the whole process of selling your art. Over a lilting, descending melody, Mitchell mourns that the people who are best at the simple act of expressing themselves are the ones most vulnerable to the machinery of fame.

6. “People’s Parties” (1974)
As Mitchell became a bigger star with 1974’s Court and Spark, her ambivalence about the whole thing became more obvious in her songs. She also began to, perhaps consciously, create songs that weren’t so easily digested by those expecting a three-minute pop hit. This dissection of the hangers-on at a soulless social gathering contrasts with the narrator’s clear discomfort at being in a place where everybody is “giving to get something.”

7. “Raised on Robbery” (1974)
Who knew Mitchell could rock? She gets ample help from Joe Sample’s funky clavinet, Tom Scott’s strutting saxophone, and Robbie Robertson’s gritty lead guitar. (Mitchell would return the favor to Robertson by appearing at “The Last Waltz” a few years later.) In typical Mitchell fashion, she comes at the genre sideways, especially considering the USO-style harmonies at the start. But once she gets cooking, she has a blast telling of a hotel-bar rendezvous between a pair of shady characters.

8. “The Hissing of Summer Lawns” (1975)
The title track to Mitchell’s 1975 album, one where she went all-in with her jazz predilections, sounds like it easily could have fit on one of Steely Dan’s albums from that time. Only Mitchell lays off the lyrical sarcasm as she strikes deep into the dark heart of a modern marriage. The images are all stark and foreboding, and that titular noise might as well be a giant viper ready to put this couple out of their matrimonial misery.

9. “Amelia” (1976)
By the end of the ’70s, Mitchell’s experimental tendencies eventually took center stage over her songwriting; 1976’s Hejira was one last, brilliant hurrah in her amazing, nearly decade-long hot streak. This track is the kind of high-wire songwriting act that few could even attempt, let alone pull off. On a long journey in the aftermath of a breakup, the narrator finds a kindred spirit in Amelia Earhart and wonders if her restless traveling is a preferable fate to Earhart’s being “swallowed by the sky.”

10. “Both Sides Now” (2000)
It’s unfair to compare Mitchell’s later work to her classic run; heck, it’s unfair to compare just about anybody’s work to that towering standard. She revisited this song, the one that made her known to most people for the first time — through Judy Collins’ baroque pop version — on a 2000 album that mostly found her interpreting other people’s work. And here she interprets the brilliant composition by her younger self like the standard it deserves to be, her weathered, wisdom-choked voice resting upon the words like a benevolent spirit.

PS. A closer look at Joni Mitchell’s Hejira.  And one at another masterpiece, Court and Spark.