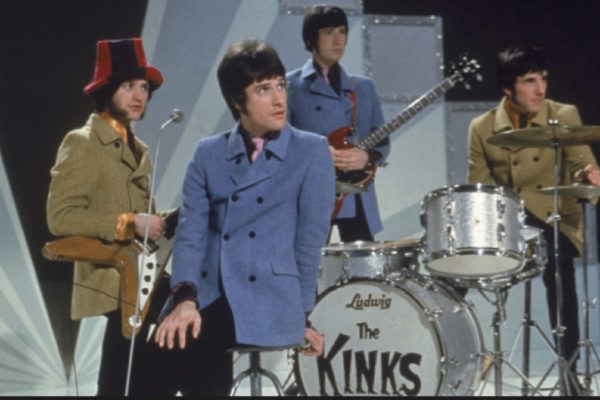 The Kinks are of course well-known in America, or at least several of their quite distinctive “periods” are. Their initial hard-rocking British Invasion period, their “Lola” period, their late ’70s “Low Budget” period and their early ’80s MTV/”Come Dancing” period, certainly. But it’s the period between the first two — to my mind their best – that I’d like to focus on for this piece. The fact that this period — which includes what are perhaps their two best albums — is lesser known to many Americans is largely a function of history and the band’s getting very specifically British for those two albums. But it would be a shame for American fans to miss out on their best work.

The band burst on to the music scene with a particularly noisy entrance. “You Really Got Me” arguably rocked harder than anything the Beatles or Stones released that year (1964), and indeed that record has often been called either the first metal or first punk single. (Take your pick.) Lead guitarist Dave Davies allegedly once said that “They didn’t call it heavy metal when I invented it.”

Americans ate up the band’s early hard-rocking singles, but a legal dispute with the American musician’s union meant that after the band’s first US tour, they were not allowed to tour the US again till the end of the ’60s, guaranteeing that some of their best work would remain underappreciated on this side of the pond. Even “Waterloo Sunset,” the mid-’60s single often considered the best the Kinks ever released, failed to chart in the US at all, though it would belatedly become a staple on rock radio starting in the ’70s.

The 1970 single “Lola,” and the end of the union ban, meant that the Kinks would get back on to the American charts, and back into the American consciousness. But just prior to that, the Kinks would release what for my money are their two best albums, criminally overlooked in America at the time, and to a degree, still so today.

It probably didn’t help that both albums are so resolutely, quintessentially, unabashedly British. So for you Anglophiles out there, or simply those who recognize that sometimes the most specific artistry is really the most universal, I give you the Kinks’ best two albums.

The first of the two was (The Kinks Are) The Village Green Preservation Society. Like the previous year’s “Waterloo Sunset,” it failed to chart in the US at all and only gained its reputation later. In fact, it usually tops critics’ lists as the best Kinks album and often ranks in top 100 rock album surveys. In a sense, it’s the Kinks’ Pet Sounds, another album that flopped on initial release and gained stature along the way — though (like Pet Sounds) many people know it more from reputation than from actually listening to it.

It didn’t help that there was no hit single from the album. “Starstruck” was chosen, but it failed to make much impact, even in the U.K., and certainly the title track or “Picture Book” (rescued from obscurity by a 2004 HP commercial campaign for photo printers) would have been better choices. Instead, what we have is a song cycle of Ray Davies gems, all related in some way to his nostalgia for childhood and the presumably simpler way of life represented by the “village,” even if that village was just one of the more suburban-ish districts of London, as it was for Davies.

Some songs recall actual people such as a childhood friend (“Do You Remember Walter?”) or the local prostitute (“Monica“). Others imagine a rural past Davies didn’t actually have (“Animal Farm” and “Village Green“). In “Last of the Steam-Powered Trains,” Davies personifies himself as the last of that dying breed.

Of course, this being Ray Davies, there are wry recognitions throughout that sometimes nostalgia is just a way we play tricks on ourselves. At the end of “Walter,” Davies sings that “People often change / But memories of people can remain.” Is he saying that his friend has changed and that he prefers his memories of the “old” Walter? Or that sometimes we just prefer our idealized memories to reality? In the context of the whole song (and the whole album), it’s a little of both, which is one of the things that makes the album such a treat.

This ambiguity is equally present in the next album, Arthur (Or the Decline and Fall of the British Empire). Originally conceived as a soundtrack to a British television drama that never aired, Arthur told the story of the fictional (though based on Davies’ brother-in-law) Arthur Morgan, a carpet-layer, and a rough history of Britain from 1900 to 1969.  This musical-that-never-was compares quite favorably with The Who’s Tommy, released the same year.

The album kicks off with “Victoria,” with Davies seemingly extolling the virtues of the monarch and the Empire she represented. Is he really celebrating a time when “Sex was bad and obscene / And the rich were so mean” and is he serious talking of the Empire “When I grow I shall fight / Let its sun never set”? From the exuberant music, it certainly sounds like it, but once again Davies is expressing nostalgia for a time when it seemed like Britain was “greater,” but that he knows full well wasn’t so great for a whole lot of people.

The rest of the album explores this, particularly the British class system, far more rigid than the more fluid (but still real) system found in America. Davies’ insistence on the primacy of class in Britain permeates the album, from “Yes Sir, No Sir” and “Some Mother’s Son,” which immediately follow “Victoria” and address the reality of average Britons used as cannon fodder to support the Empire name-checked in “Victoria”’s last verse, to the ironically titled “Shangri-La” — what Arthur calls his modest home — which explores Arthur hitting the top of what the class system will allow him to be.

So what to do if you want something more? Emigrate, perhaps? “Australia” tackles this head-on, and once again we see Davies mastering the art of lyrical ambivalence, simultaneously acknowledging the appeal (and indeed, the fictional Arthur’s son is supposed to have taken this leap), while lampooning the hell out of it. The background vocals continually promise the siren song of “no class distinctions!” (in a tone that lets one know that might not be entirely true), while the lead promises that “We’ll surf like they do in the USA / We’ll fly down to Sydney for a holiday / On a sunny Christmas day” — but only, of course “if you’re young and healthy” (which leaves Arthur out).

British specificity abounds, including name checks like Princess Marina and Anthony Eden that most Americans will probably not be familiar with. And yet, the specific is the universal, and any American can suss what Davies is getting at here, and understand that to one degree or another, it applies everywhere.

PS. Read more about Arthur and a lot of other great concept albums in our post 31 Concept Albums You May Have Missed. Plus, you may enjoy Let Paul Simon, James Taylor and Bob Dylan Be Your Travel Guides and 15 Bands That Could Be Considered the Next Beatles.