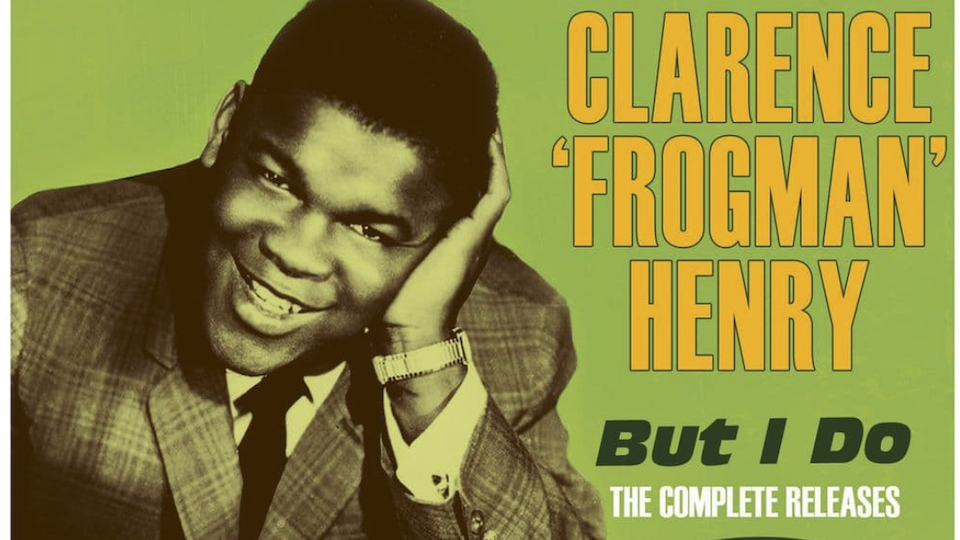 Muddy Waters once sang that “the blues had a baby and they named it rock ‘n’ roll.”  If this is true, then the earliest known maternity ward where blues babies resided before they grew into legendary status would have been Cosimo Matassa’s J&M Recording Studios in New Orleans.  Cosimo simply recorded entire songs (with no edits!) played live by the best bands in New Orleans.  From behind his closed doors emerged powerhouse pop like Little Richard’s “Tutti Fruitti” and “Good Golly Miss Molly,” Smiley Lewis’ “I Hear You Knockin’” and what some cite as the first rock ‘n’ roll records: “Good Rocking Tonight” by Roy Brown in 1947 and 1949’s “The Fat Man,” where Fats Domino, in his first commercial release, fat shames himself for weighing 200 pounds.

But sadly, most of the 1950s artists who created the “New Orleans sound” have passed away and there is but one man who can say he recorded a smash hit at Cosimo’s studio in the 1950s…and opened for the Beatles in 1964: Clarence “Frogman” Henry.

Clarence, now 85, was the Biz Markie of his time; a man with few hits but blessed with an infectious personality and a nickname that he was proud to call his own.  It was bestowed on him by a New Orleans DJ named DJ Poppa Stoppa (Clarence Hamann).  Clarence Henry stated: “I loved Fats Domino.  I always wanted a nickname like him.”

And in 1957, he released his signature song, “Ain’t Got No Home.”  The tune, which was later covered by The Band on their oldies’ album Moondog Matinee, was improvised by Clarence at the Joy Lounge, a New Orleans’ club.  His band had run out of material so he blurted out how he was a lonely boy…then a girl…then a frog; singing how he ain’t got no home in his own voice, a “girlish” falsetto and a croaky “frog voice.”  Bordering on being a novelty song, it amazingly flew up the charts.

Clarence’s “Ain’t Got No Home” and 1962’s stellar “I Don’t Know Why (But I Do)” were worldwide hits, facts that weren’t lost upon his manager, Bob Astor who worked for General Artists Corporation—the same company that brought the Beatles to America in 1964. They brought Clarence onboard to open for them on a 21-day tour. Astor introduced Clarence’s good friend, Fats Domino to the Fab Four.  Clarence remembered:

“So after Fats finished talking to them and came back with Bob, Bob said, ‘Fats, how did you enjoy the Beatles?  Fats said, ‘Man, them cats talk funny!’”

“Bob brought us up to their dressing room and they had a big old huge watermelon. Now the Beatles, I don’t think they knew what a watermelon was ‘cause they were hitting it and poking it with a knife!  Paul was the friendly one.  We hung out together and talked together.  Ringo just asked me questions about myself and my career.  But I had no dealing with John or George.  Paul was the greatest.  I called him a Soul Brother.  He was down home.”

After the tour ended, Clarence’s career almost ended; as he noted:

“I went back to playing on Bourbon Street and suddenly everything was guitars. And then they had the long hair, and all the kids in the world started wanting long hair. And my hair didn’t grow too long.  The British put a hurt on us.  It lasted a few years but we got it back.”

Thirty years later, Clarence really got it back and then some when his Allen Toussaint-produced epic “(I Don’t Why) But I Do” was used on the Forrest Gump soundtrack, a 1994 album that sold eight million copies and reached #2.

This tune’s title also symbolizes Clarence’s checkered marital history; which resulted in seven failed marriages, including one woman he married and divorced twice.  He stopped being the marrying kind after his seventh marriage lasted two days.

After years of touring, Clarence settled down in a part of New Orleans called Algiers where his home was walloped by Hurricane Ida in 2021.  Unlike Fats who didn’t leave his beloved Ninth Ward home during Hurricane Katrina, only to be airlifted from the third floor of his house and brought to the Superdome, Clarence stayed with his daughter, Cathy, during Ida but returned to live in his half-destroyed home.  Mold had filled the house and ceilings had collapsed, ruining his bed and causing him to sleep on his couch.  Thankfully, home restoration companies stepped up and made the Frogman’s pad livable–without charging him a cent.

Today, Clarence spends his days with his many grandchildren and hopefully, imparting upon them a wise life lesson he told an interviewer:

“I don’t jump because of money.  I like friendship more than money.  Some people let success go to their heads, but I don’t.  I know where I come from and I haven’t forgotten where I come from.”