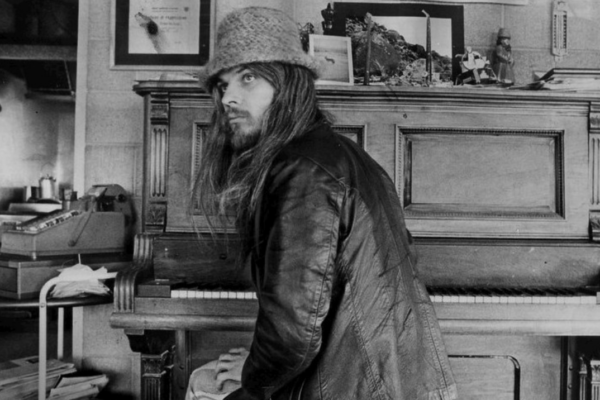 With the passing of Leon Russell, we lost a soulful, kick-ass virtuoso whose broadband versatility in gospel-infused southern boogie piano rock, blues and country is unsurpassed. Aside from his astounding resume as a hit-making studio musician, hippie commune band leader and singer, the Russell songbook includes some unforgettable pop standards: “This Masquerade,” “This Song For You,” “Tight Rope” and “Superstar.” Ray Charles, George Benson, Rita Coolidge, Willy Nelson, Christina Aguilera and Herbie Hancock are a few artists who’ve recorded covers of these master works. With all these accomplishments, it’s easy to overlook his political songs. Russell’s career as a solo artist peaked in the early 1970s when the USA was traumatized by the Vietnam War. He was deeply affected by the turmoil and wrote about it.

A great example is his song, “Of Thee I Sing,” from the album, Leon Russell and the Shelter People. He composed this little-known gem after the Kent State University shootings on May 4, 1970. Students were demonstrating against the Vietnam War. The Kent State campus had become a hotbed of unrest. Several nights earlier, someone had set the ROTC building on fire. The Governor of Ohio called out the National Guard. Lacking a clear order to shoot, they fired anyway: 67 rounds in 13 seconds. Four unarmed students were killed. Two were just walking to class — not a part of the demonstration. One was a member of the ROTC.

The Vietnam War had torn the country in two: Doves vs. Hawks. Mai Lai. The draft. Then, on April 30, 1970, Nixon escalated the situation by bombing Cambodia. Many citizens were angry. Doves accused pro-war sympathizers of wrapping themselves up in the American flag, labeling anti-warriors “un-American” and kidnapping the American flag. For his part, Russell was outraged. “She changes right before my eyes into something ugly and sore,” he sings. It hurt him. “And the blood is on the books in Ohio, so badly stained what could I say?”

Musically, the song begins with Russell’s energetic piano-octave bass in his left hand and a boogie-woogie right hand lick a la Jerry Lee Lewis. Not surprising. Teenage Russell played his first road gig with The Killer. The music builds with gospel backing vocals and a tight rhythm section. Then, suddenly, Russell drops it down to the tastiest single note piano solo. Another thrilling build takes the song’s climax straight to the pulpit. The music pauses. The preacher preaches. On the last blue note, everybody testifies.

There are more songs on this album that may have been inspired by the political climate of the day. “Alcatraz” is an ironic denial of freedom told from a Native American’s point of view. “Stranger in a Strange Land” is an affirmation of confusion of a man trying to find his place in the world. Nicknamed “The Master of Space and Time,” Leon Russell’s political songs continue to resonate today. No surprise he was inducted into the Rock and Roll Hall of Fame.