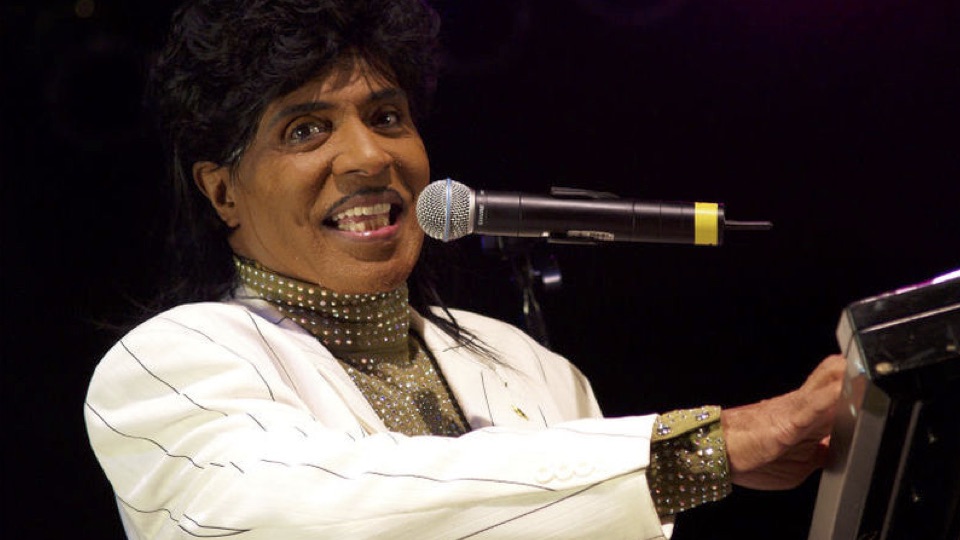 The online tributes to rock ‘n’ roll pioneer Little Richard are coming in fast and furious, as they should. Yes, he was an iconic American artist who influenced an entire generation of musicians; but he transcended the standards by which we measure things like stardom and success. For many of us too young to remember the 1950s, Little Richard has simply always been a part of the landscape, like stars in the sky. I will leave the scholarly analyses of his music to other writers; instead I’m reliving a true rock ‘n’ roll moment from Little Richard that I was able to experience firsthand (along with millions of TV viewers), three decades after he first exploded like a supernova onto the world stage.

It was March 2, 1988. The 30th Annual Grammy Awards were being broadcast live from Radio City Music Hall in New York. (Album of the Year: U2’s The Joshua Tree.) Host Billy Crystal introduces two people to present the award for Best New Artist: Buster Poindexter (the freshly-minted jazz/lounge alter-ego of New York Dolls frontman David Johansen), and Little Richard. Pairing Richard and Poindexter was an inspired choice: both were known for over the top, larger than life stage personas. Poindexter’s eponymous debut album had been released a year earlier and was gaining momentum fueled by his ubiquitous “Hot Hot Hot” single.

Poindexter and Richard strolled across the Radio City Music Hall stage, each looking like the stars they were born to be: Poindexter sporting a mile-high pompadour hairstyle, and Richard in a resplendent gold tuxedo and dark glasses. As they reached the podium, there was the kind of awkward pause that can only happen on live TV before Richard gestured to Poindexter and said: “I used to wear my hair like that!” It was a lighthearted joke that got a decent laugh, but Richard followed it with a deeper remark: “Everything I get, they take it from me!”

You couldn’t argue with Richard whenever he loudly and spontaneously proclaimed himself “the king” or “the originator” of rock and roll; besides the fact that he was correct, these proclamations were always delivered with such grand, celebratory style and explosive power that was joyous to behold. Bass guitar legend Jaco Pastorius once said that “It ain’t bragging if you can back it up,” and anybody with two ears could tell you who the real King of Rock and Roll was.

After Richard engages in a few more unscripted seconds of hair-related banter, Poindexter is eager to get on with it. “Now?” he asks. Richard is having none of it: “Shut up,” he says. Finally, Poindexter announces the nominees (for historical context: Breakfast Club, Cutting Crew, Terence Trent D’Arby, Swing Out Sister, and Jody Watley). The camera returns to the podium for Richard to announce the winner: “And the best new artist is…” and without even opening the card he declares: “ME!”

As the audience erupts in laughter and cheers, Richard wags a finger and starts to move away from the podium to admonish them. “I ain’t never received NOTHIN’, y’all never gave ME no Grammys, NOTHIN’! And I’m the architect of rock and roll! Y’all never gave me NOTHIN’!” As he shouts the words “architect of rock and roll,” the camera cuts to a wide shot of the packed auditorium jumping to its feet in uproarious praise. He continues over the road of the crowd: “And I am the originator…and I still say ‘Woooooo!’”

It shouldn’t look good on paper: a 55-year old singer who hadn’t been on the pop charts for years, going rogue during a live Grammy telecast. Today, they would have cut his mike and gone to commercial. But what makes this moment so entertaining is not just that it was clearly unplanned and unrehearsed, but that the director of the telecast is on point: it’s obvious that a generation raised on rock and roll was in charge of the media in 1988, and for a hot minute the “30th Annual Grammy Awards” became “The Little Richard Show.”

He finally opens the card to announce the winner, but he’s still not done. He laughs maniacally and shouts “The winner really is me!” As he cackles away from the podium, the camera continues to follow him in all of his shining, subversive glory. He shouts directly at the Radio City audience, off-mike and barely audible to the TV viewers, “I’m gonna scream like a white lady!” Poindexter helplessly tries to reel him in: “Richard…Richard?” “Shut up!” Richard says once more. When he finally announces the “real” winner, Richard shouts “JODY WATLEY!” with enough trademark grit and gusto to make her name sound like one of his own rock and roll classics.

The spirit of Rock and Roll is meant to shock, surprise, and inspire. But’s not enough to be disruptive and subversive for its own sake; you have to do it with style, and make the audience ultimately glad that you did. Little Richard could not help but be exactly who he was at all times; with no elaborate sets, no lights, no backup dancers, not even performing a damn song (!), Little Richard stole that show. When I watched it live I was a month away from my 16th birthday, my own musical aspirations well underway, and I thought it was the coolest thing ever. But seeing it again three decades later gave me the same thrill. We all know that his legendary, trailblazing music will live forever, but I am blessed and fortunate to have felt a tiny bit of that man’s outrageous, dangerous magic in real-time. LONG LIVE THE KING!

2 comments on “Little Richard: Long Live the Architect of Rock”