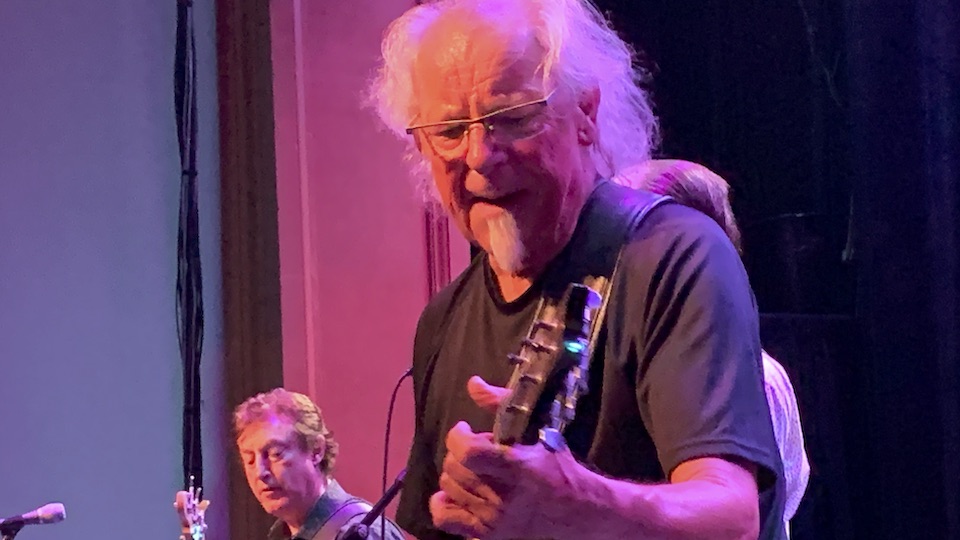 Author’s note: Martin Barre, the Grammy-winning guitarist of Jethro Tull, is in the midst of a 40-date solo tour in the US and Canada. He recently spoke with CultureSonar about his 50-plus years in rock. His current Martin Barre Band has drawn rave reviews from his fans, young and old while bringing a revived interest in his vast solo work since leaving JT nearly 10 years ago.

CultureSonar- The current tour of the Martin Barre Band is focused on Jethro Tull’s flagship album Aqualung. What are your reflections on the album and how do you see its place in musical history?

MB- It’s important in Tull’s history, but probably not in general musical history. It’s not exactly an album of radio tracks. It’s there in its little category. It’s sort of top of the tree in a niche market, but for Tull fans, it’s very important. Being able to play to it has been a lot of fun, but not iridescent in today’s market. But by playing it, it really works, it’s a total success. Aqualung is great live music.

CS – Thinking back on the album, you experiment with many guitar sounds on the two prior JT albums (Stand Up, and Benefit). The guitar peddles were there, (wah-wah, vibrato effects), and then Aqualung comes out and we hear an exclusive direct plug-to-amp sound. For me, this was the album where you established the “Martin Barre sound.” Was that your approach at the time?

I guess I wasn’t aware of it, but I guess it was. At that time, we were still finding our feet. It followed Stand Up, which was a great boost to Tull in the States. Its success drove us forward, and Benefit had some great tracks as well.  By the time we got to Aqualung, we were so far ahead of ourselves, and I think we sort of found ourselves in the studio with a need for a bit of new direction, as we really had no plan.  There were big expectations after two successful albums; we were all looking to establish ourselves as individuals. I think the combination of acoustic and electric tracks became Tull’s signature. Again, it wasn’t part of a plan.

CS- Another technique that shows up on Aqualung is the rhythmic scraping of your guitar strings (as on “Locomotive Breath”). You don’t return to that technique again (perhaps a little on Passion Play). Was this your direction at the time? You were working with the others being influenced to become part of the rhythm section, so to speak?

MB- Well, I don’t really think about what I do or why I did it, at the time. In terms of technique. I think the one person who ever really influenced me was Leslie West (of Mountain). I sort of pinched harmonics ideas from him.  I loved his melodic playing, although I certainly didn’t want to copy him. I do give him a nod as he was a big influence. Mountain was the support band on a big Tull tour in those days and we got to know them really well.

CS- There has been plenty of recognition as your work on the title track of Aqualung. In many polls, it has been singled out as one of the greatest rock guitar solos of all time. When recording the track, I’ll assume you didn’t sit down and say, “Now I will record an iconic solo” but can you think back as to your approach at the time?

MB- (Laughing) It was totally improvised. There was no plan at all. Just went out into the studio, plugged in and that solo wasn’t even the first take, it was definitely the second take. There was seemingly nothing special or important about the solo. I think to this day Ian (Anderson) regrets that it wasn’t a flute solo. He personally can’t play “Aqualung” in its original form as the guitar solo was, and is still, an important part of the music.  I am so grateful as it has given me a signature (if that’s the right word) that I don’t personally think breeds it, but other people might, of course.  For me, it gives a jumping-off point to some sort of recognition. That gives me a personal goal to play better and to make sure I keep that sort of reputation alive. I am still out there playing and hopefully able to make people happy, and that’s great.  So, that is why the solo is important to me, but I don’t listen to it and think, “Wow, that was amazing!”

CS- Let’s talk about the MB Band for this tour. One can’t go far without acknowledging singer and guitarist Dan Crisp. This guy does it all! Where did you find this man? I appreciate the position he’s in, and it’s not an easy one. Was he aware that he would be seen as “replacing” the legend next to Martin Barre? He could have easily fallen into a parody of Ian Anderson, but he really pulls off that thin line of singing the traditional way that the fans want to hear the Tull songs, yet his delivery and presence are still all his.

MB- Yes, agree. But overall, that is not the case at all here. Because as much as Ian is irreplaceable in “my world,” I am irreplaceable in “his world.” So, you are not looking to replace that medium, or looking for someone to be in that place musically. You want someone to create their own personality. You have to do that because, suddenly, someone is mentioning the term “tribute band!”  And I have had a few idiots say that about me, and that really makes me angry.  In no way would I want to be categorized that way, but if we were to be that, I could probably make four times the money we make now. I was recently watching TV and they were advertising an ABBA tribute band. I’m thinking, ‘hang on, that means the people are not important.’ It’s not about what the people are doing with the music, it’s just the package for selling. We should always be supporting local musicians that are trying to establish their own person in their music. As Dan has done to these songs for our band.

CS- Today it must be very tempting to “have a go” at rearranging traditional Jethro Tull tracks with your band, but you have kind of stuck to the recorded structure. The main exceptions are you having to replace all the flute lines; how did you approach this challenge?

MB- Yes, rearrangement of songs is a dangerous direction to go in. I try to stay within the guardrails, but we occasionally have fun. Some of the old tracks are a bit bland in today’s world. There are not many, so we may try a bit of rearranging. But I don’t rearrange as an exercise. We do have fun with it, example is we do a rearranged “Eleanor Rigby.”

CS- Yes! I love that arrangement, it’s brilliant!  On stage, you give a little fun speech that America’s got a lot of stuff to be proud of, but England will always have the superior Beatles! To that point, do you really feel that way about the Fabs? What was their impact for you?

MB- Yeah, I think everyone my age was influenced but the Beatles. They were the best band, the most original, most inventive band, so everyone of that era thought they were hugely influential. Not many didn’t like them, at least in England.  The Beatles were leaders, and I remember when Sgt. Pepper came out, they re-established themselves. Putting themselves right at the top again by blowing everybody away. They were artists and came out with albums that bypassed all the trends that were happening. I don’t mean to be disrespectful of “Eleanor Rigby”’s songwriting, but our arrangement is a bit of fun, and the song shines through. But re-arrangements, as a rule, can become a dangerous habit.

CS- For the many iterations of the personnel for the Martin Barre Band, is it a prerequisite to be a Tull fan and have a musical knowledge of the catalog in order to join the band?

MB- No, I prefer the opposite. I don’t want the players to be pre-programmed. Darby Todd (current drummer) is a prime example. He knew something about Tull’s music, and he soon discovered how good a player Clive (Bunker, who has also joined the MB Band for this tour) Barry Barlow, and Doane Perry were. So, he really enjoyed learning the music. Darby did eventually bring his own take to the music. Maybe that’s the point. I don’t serve the Tull heritage, I acknowledge it. I am proud of it, but it’s not as important as my own music to me, although it doesn’t sell as many tickets. I am proud of what I do with my writing and arranging. I like what I do because it’s aimed at me. I quite like the fact that my neck is on the line.  Having two drummers for this tour comes down to Darby. He’s amazing at working with musicians. It was Darby who figured out how he and Clive could play together, gave Clive a lot of direction, so we spent a lot of time rehearsing.

CS- Another Tull anniversary is upon us this month: Thick As A Brick was released 50 years ago. A concept album- one song, both sides. Your reflections upon that album?

MB- I can’t settle on the adjective of a ‘concept’ album. We just wanted it to be sequential. We thought it would be cool not to have a two or three-second gap between each song, start-stop, start-stop. We thought we would link these songs together with instrumental bits. People have been doing this for hundreds of years. If you listen to classic composers, it’s very normal. Yet, they are not called ‘concept composers.’ It’s just a different way of presenting music, and I like it. It’s a very natural thing to do. It was not over-thought at the time. We were writing much of it on the fly. We’d pick up each day where we left off, and we would come up with ideas and arrangements. The thread through all of this was Ian’s very basic songs. We had fun doing it.

Photo of Martin Barre, courtesy of the author

1 comment on “Martin Barre: On Jethro Tull, Mountain, The Beatles”