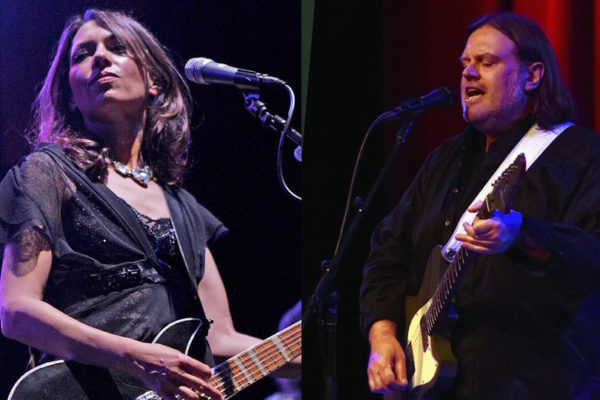 It’s always a pleasure to discover that your favorite artists are dyed-in-the-wool music fans. Cases in point. Matthew Sweet is probably best known for Girlfriend, one of the finest power pop albums of the ‘90s. Susanna Hoffs is widely recognized as the lead singer of The Bangles, a band that’s shown its love for well-crafted pop by covering songs by Big Star and Jules Shear. In 2006, these two artists teamed up to release Under the Covers, a collection of ‘60s classics, and what’s great about the album is that Sweet and Hoffs didn’t just pick the most obvious tunes to interpret for the project. Two sequel releases — covering songs from the ‘70s and the ‘80s — were released in 2009 and 2013, respectively. Here’s a half dozen choice cuts from the overall series. (The all-star backing band includes Richard Lloyd, Van Dyke Parks and Ric Menck.)

Any project saluting the music of the ‘60s is eventually going to find its way to the songs of The Beatles, yet Sweet and Hoffs (a.k.a. “Sid ‘n Susie” as they refer to themselves in the liner notes) don’t go for the expected options here, like “Yesterday” or “Something.” Instead, they rip through a fantastic version of this excellent rocker from Revolver. Their Fab Four selection shows that their passion for The Beatles extends to lesser-known cuts, and not just the hits, both of which are equally loved by true fans.

Hoffs does a lovely job on this ballad from avant-garde rockers The Velvet Underground. With good reason: Hoffs is no stranger to this kind of tribute, having participated in the “supergroup” project Rainy Day (1984), which featured members of the The Bangles, The Three O’Clock, and The Dream Syndicate covering ‘60s nuggets by Buffalo Springfield, Bob Dylan, and The Beach Boys. That album is where Hoffs first cut her teeth on the music of Lou Reed, providing a stellar cover of “I’ll Be Your Mirror” which, like this track, almost surpasses the original.

With all due respect to their covers of Derek and the Dominos, Mott The Hoople, and Todd Rundgren, this Fleetwood Mac favorite received an official stamp of approval by featuring Lindsey Buckingham in the band. Sweet and Hoffs are clearly thrilled to be playing with one of their idols, and Buckingham shows why his masterful guitar work is one of his own group’s not-so-secret weapons. (Side note: The duo sound equally inspired by Dhani Harrison, who shows up to cameo on his father George’s “Beware of Darkness.”)

The duo gender-switches this Raspberries tune by having Hoffs take on the vocals, originally performed by Eric Carmen. The plaintive lyrics find a whole different slant coming from the female perspective. Having Sweet take the lead on “You’re So Vain” on this volume is also a clever twist — and well worth hearing — but Hoffs does a phenomenal job strutting her stuff with what is a quintessentially male POV.

Nestled inside the most eclectic collection of the series is this track originally recorded by cult power poppers The dBs. If there’s any justice, the faithful, guitar-driven version of this Peter Holsapple song (with excellent vocals by Sweet, ably backed by Hoffs) will send listeners scrambling to seek out The dB’s beloved 1981 album Stands For Decibels, which has long been considered a touchstone of the jangle pop genre.

This Kirsty MacColl penned tune was a 1983 pop (and MTV video) hit for Tracey Ullman, yet Hoffs brings this ballad back to its roots with a wistful version that owes a great deal more to MacColl’s excellent original circa 1979. Indeed, she gets right to the heart of the song in an emotional performance that’s one of the high points of Volume 3. Hoffs even includes the song’s indelible midpoint “Ba-by” moment.