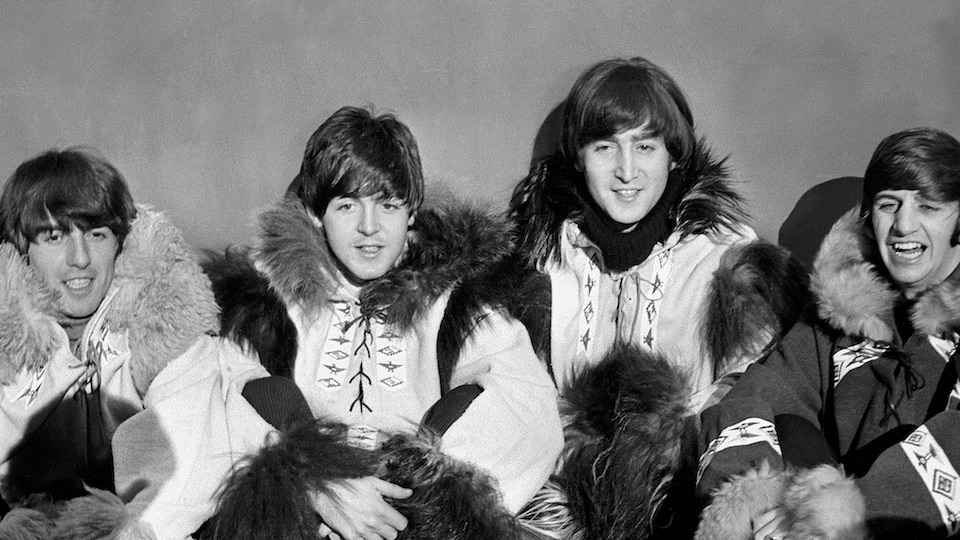 Every December from ’63 to ’69, Santa came early for Beatles fan club members, who received limited-edition flexi-disc singles with seasons greetings from John, Paul, George, and Ringo. Beatles press officer Tony Barrow came up with the concept for The Beatles Christmas records and scripted early efforts. The Fabs were willing collaborators and, lucky for fans then and now, often strayed from the script to indulge their love of Goon Show-style voices and music-hall irreverence. Nowadays you don’t need exclusive membership to enjoy these whimsical recordings — various bootleg versions have appeared through the years and Apple Records released a box set in 2017. Here, then, are highlights regarding these Fab holiday treats.

The first Beatles Christmas record kicks off with a boisterous rendition of the carol “Good King Wenceslas,” after which John manages to invent a new way to say “Merry Christmas” (“Gary Crimble”). Paul tells fans the group has gone right off “jelly babies” (no doubt because fans were sending them — and throwing them at live shows — in droves). George gives a special shout-out to fan club secretary “Freda Kelly of Liverpool,” to which the boys chime in with a shout of “Good Ol’ Freda,” the eventual subject of a 2013 documentary about their hometown fan club’s national secretary. It all ends with the boys barely able to contain themselves through an ad-libbed verse of “Rudolph the Red-Nosed Ringo.”

After a kazoo-and piano-powered snippet of “Jingle Bells,” Paul tells fans he hopes they’ve enjoyed listening to the records as much as “we’ve enjoyed melting them.” Lennon also sends up the script and displays his gift for surrealistic puns, a la his then recently-released book of poems In His Own Write, which he dutifully thanks fans for buying.

All four show a fondness for characterizations and corny larking on this one. Several acapella versions of “Yesterday” intersperse with Lennon’s Scottish-inflected “Happy Christmas to Ya List’nas.” Ringo joins in on “Auld Lang Syne” and George quickly puts an end to an improvised fragment of the Four Tops’ “It’s the Same Old Song” with an abrupt, “Copyright, Johnny!” Goofing aside, the boys once again thank fans for sending what, at that point, must have been several metric tons of cards and gifts.

Recorded between sessions for “Strawberry Fields Forever” in Nov. ’66, the fourth disc is a collection of original song snippets (“Everywhere It’s Christmas,” “Orowainya,” and “Please Don’t Bring Your Banjo Back”) threaded with pseudo-serious sketches (“Podgy the Bear and Jasper” and “Felpin Mansions”) that, in truth, seem more like excuses for the boys to indulge in more madcap characterizations. The increasing use of sound effects and collage — McCartney’s art’s on the cover — reflect their expanding horizons and hint at more “turned-on” zaniness to come.

The Beatles Fifth Christmas Record a.k.a. “Christmas Time (Is Here Again)” was recorded and mixed in late November ’67 and developed around the loose concept of several groups auditioning for a BBC radio show with the title song appearing as a refrain throughout. Again, the group portrays a multitude of characters: George, a radio DJ introducing the wacky song snippet “Plenty of Jam Jars”; John, an enthusiastic game show host worthy of Monty Python; and John, a mock-Scotsman reading an original work “When Christmas Time Is Over.” Even producer George Martin sings on the title song, along with Beatles’ friends Mal Evans and Victor Spinetti.

The first fan-club disc on which the four Beatles recorded their messages separately is also, the most kaleidoscopic — evoking The White Album’s sound collage “Revolution Number 9” released just one month prior. Indeed, McCartney’s still in “Mother Nature’s Son” mode on his acoustic ditty “Happy Christmas, Happy New Year,” while John offers more Joycean wordplay on “Jock and Yono.” A rather laid back George notes “another fab Christmas,” before introducing guest Tiny Tim, who offers a few bars of “Nowhere Man” in his inimitable falsetto. A sped-up snippet of “Helter Skelter” and fragments of “Ob-La-Di, Ob-La-Da,” “Birthday,” and Perrey & Kingsley’s “Baroque Hoedown” are enough to drive one to eggnog.

The messages on the final Beatles Christmas offering also were recorded separately, as the band had effectively split at that point. George offers a brief holiday greeting while Ringo sings an improvised ode and later plugs his film of that year The Magic Christian. Fittingly, Abbey Road’s “The End” fades in and out and Paul on his trusty acoustic guitar offers another two-chord ditty. We get a visit with John and Yoko at their Tittenhurst Park estate, with John offering his list for Santa while Yoko talks about her wish for the 1970s. A choir sings “The First Noel,” punctuated by a chuckling Ringo, which ends the whole affair rather unceremoniously.

0 comments on “Merry Christmas From The Beatles”