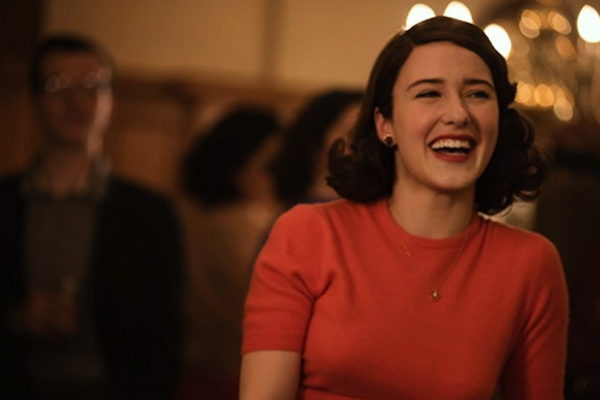 Although the series just picked up two Golden Globes for Best Actress and Best Comedy/Musical (plus a Critics Choice Best Actress win), we’re guessing that The Marvelous Mrs. Maisel is that Amazon Prime show that you may have overlooked among the 487 scripted series that aired in 2017. Created by Amy Sherman-Palladino (Gilmore Girls), this sharp series tells the story of a young, 1950s Jewish housewife who becomes a stand-up comic after her husband leaves her for his secretary. What makes this show so mesmerizing is how big and theatrical it feels while consistently delivering laughs that never undercut how difficult it was to be a woman trying not to get trapped by her privilege.

The now award-winning Rachel Brosnahan is challenged with playing lots of different aspects of her larger-than-life character and boy, does she stick the landing! Her best moments come when her character is onstage doing transgressive stand-up — she ends up in jail more than once — but she also manages to infuse just enough sparkle into her role of loving, supportive wife so you won’t be nauseated by the sweetness of it all. In the pilot, for instance, there’s a delightful montage of her going-to-bed ritual that reveals her commitment to the “perfect marriage” includes never letting her husband (Michael Zegin) see her without make-up. Brosnahan continues to shine in moments with her overbearing parents Abe (the funny Tony Shalhoub) and Rose Weissman (Marin Hinkle) as well as her combative manager Susie (Alex Borstein in a strong turn) whose androgynous style leads to running gags about her gender.

While the characters don’t burst into song every five minutes, The Marvelous Mrs. Maisel often feels like a musical thanks to the grand entrances and a perfectly curated soundtrack mostly from the 1950s. In Episode 3, when Abe goes to visit Moishe Maisel’s (Kevin Pollak) garment district warehouse you almost expect Shalhoub to break out into “What’s In It For You?” from Broadway’s Tenderloin. The use of “Ya Got Trouble” from The Music Man and Julie London’s signature tune “Cry Me A River” are ingenious. Listen closely when you’re watching each episode. The soundtrack is a character, too.

Similarly, the dialogue has a whizz-bang quality that often feels like watching a stage production. Which isn’t to say it’s too talky. The writing is tight throughout in Season 1, likely because Sherman-Palladino is credited for co-scripting every time. Like her Gilmore Girls before this, Mrs. Maisel is a show brimming with intelligent humor, even as its tugging on your heartstrings. At a time when women are having a redefining moment in the larger culture, it’s especially fascinating to watch Midge grapple with the expectations of the late 1950s, especially as a woman of a certain class and identity: She’s Jewish, college-educated, upper middle class… and though the show doesn’t address racism firsthand, it does briefly hint at the bigotry African-Americans faced.

Her father is a college professor, her husband an executive at a company that sells plastics, she’s living in a relatively nice apartment on the Upper West Side… Quite simply, this is a life defined almost entirely by its proximity to the privilege afforded by the men in her life and her ability to have children. All that was expected of Midge was that she make beautiful babies, keep her body tight, look beautiful, and support her husband. Her burgeoning career as a stand-up is actually somewhat accidental — she drunkenly goes onstage to rant about the injustices of being left by her husband for a dumb, young mistress. But soon enough, she’s hooked and hustling her way into a job as a girl at the cosmetics counter — after being turned down for elevator operator because “only men” do that — so she can work hard to become a better comic. During one pivotal moment where she’s told to become a “character” because she’s too pretty for stand-up, she delivers a blistering standup set during which she skewers the only other female comic, Sophie Lennon (Jane Lynch), for telling her she’ll need to conform if she wants to make it in the biz. Temporarily disastrous for her career, it’s also the moment when you recognize that she’s finally ready to become The Marvelous Mrs. Maisel.

PS. Groundbreakers?  Yup, the Beatles also pushed back in a big way — and our breakdown of Sgt. Pepper’s is just one path.

1 comment on ““Mrs. Maisel” Is Winning Awards and Ready to See You”