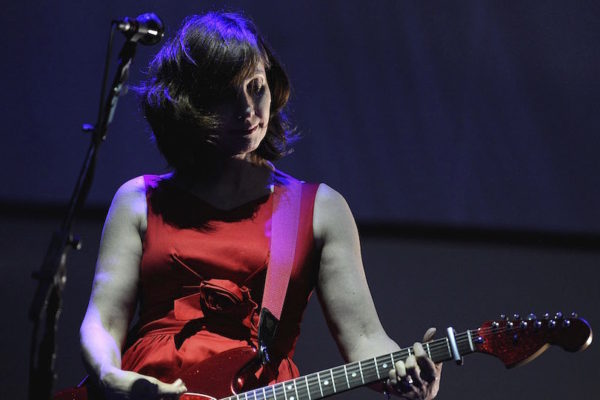 Oddly named musical genres come and go, usually inspiring bewildered smirks rather than enduring classics: “psybient,” “fidget house,” “tropical trap.” Yet few have weirder monikers than “shoegaze”–and few have been around longer. For over 30 years, the style’s mix of screeching feedback and dreamy haze has inspired bands from alternative old guard like the Jesus and Mary Chain and My Bloody Valentine to contemporary underground acts like Deap Vally and Spectres.

The genre’s origins can be traced back to the 1960s. The Velvet Underground’s mix of simple rhythms and wild flights of guitar distortion are a prime progenitor — the gloomy drone of “Venus in Furs,” the blistering noise of “White Light, White Heat.” (Lou Reed and Mo Tucker also helped establish what would become the predominant sartorial style of striped-tee-and-leather-jacket). The twangy echo of Link Wray and the fuzz-pedal solos of Jimi Hendrix also made their contribution, as did assorted bits of garage/psychedelia, such as the guitar break in the Count Five’s “Psychotic Reaction.”

But it took until the 1980s for the genre to come into its own with the Jesus and Mary Chain’s 1985 album, Psychocandy, which created an ethereal-yet-abrasive wall of sound, like a mixture of cotton candy and barbed wire. The following year, My Bloody Valentine released their EP The New Record by My Bloody Valentine, a mix of ‘60s dream pop and guitar fuzz and the genre was officially born.

The term “shoegaze” arose from musicians’ habit of looking down at the MXR pedals and Morely Man fuzzboxes around their feet rather than out at the audience — originally intended as a joke, it became an accepted name, if one pronounced with a bit of a self-aware grin. As the ‘80s headed toward the ‘90s, there followed a slew of one-syllable bands — Ride, Loop, Lush, Curve — who deployed excessive effects and grinding guitars.

Shoegaze bands also tended to feature female musicians in greater numbers than others, and their contributions helped create the sound. Rachel Goswell centered Slowdive as singer-guitarist-songwriter, My Bloody Valentine owed much of their trademark pulsating sound to Deb Googe’s bass, while Liz Fraser of the Cocteau Twins created a distinctive vocal style (and her own language) that made the band immediately recognizable and utterly inimitable.

The style took a backseat during the mid-90s, but its echoes could be heard in Nirvana’s submerged fuzz, the abrasive buzz of Nine Inch Nails, the skronkier bits of Radiohead. But over the past several years, it’s had a resurgence. The 2014 documentary Beautiful Noise focused on the Jesus and Mary Chain, My Bloody Valentine and the Cocteau Twins — how they came to be and their impact on the bands that came after them. Among the high-flying fans who offered their thoughts was Robert Smith of the Cure, who said of shoegaze that “it was really sensual, kind of drew you in–it was effortless and you just found yourself immersed in this sound,” while Billy Corgan of the Smashing Pumpkins spoke if its “timeless appeal.”

Timeless indeed, as a new crew of shoegaze bands are bringing the Gospel of Fuzz to a new generation of bands and fans. Among the first back to the table were the Raveonettes and Black Rebel Motorcycle Club — both drenched in feedback with a dash of ‘60s style, but the former favored girl groups, while the latter reached toward psychedelia. Death From Above 1979 reduce the instrumentation to drums and bass, but get a big, jagged-yet-rhythmic sound out of the minimalist lineup: If you need feedback you can pump your fist to, this is it. Spectres tilt more noise than beautiful, but create a hypnotic sonic landscape out of prickly riffs and distorted chords — their live shows are brain-blastingly loud, yet you feel somehow uplifted and renewed by the assault. Deap Vally is a pair of ladies from California who push the lower end of fuzztone to the forefront — think more minor-chord groove than major-chord sparkle — with vocals that are more gritty than ethereal; they also make some pretty stylish videos. The band Nothing creates an avalanche of dreamy sound with submerged vocals and ringing guitars, while No Joy loops from laid-back beats to driving hooks, all topped with a shimmer of feedback and echo.

With over 30 years since the beginning of shoegaze — longer if you go back to its origins — it seems that what was once written off as a trend or experiment has taken hold as not only its own genre, but as a building block to many others. Without shoegaze, grunge or ambient wouldn’t exist and countless bands wouldn’t have the nerve to just lean back and let that speaker wail. So crank up your fuzzbox and be thankful.

PS. Check out our list of the 10 best Radiohead songs you may have never heard. Plus, our look at guitar trends over two decades.

0 comments on “Shoegaze Is Here to Stay”