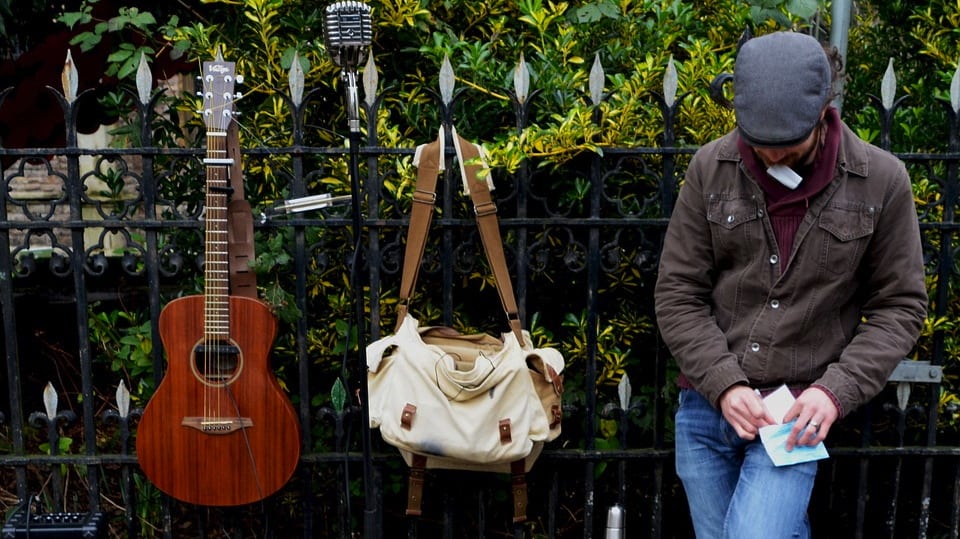 I’ve been fighting for living wages and universal health care for 25 years. (Yes, Canadian friends, we’re barbaric here in the U.S.).  In the early 2000s, I spent five years leading a successful campaign to pass a “Living Wage” law to require the City of San Diego contractors to pay living wages to their workers. Recently, I’ve been thinking about musicians.

I’ve met a number of incredibly talented and dedicated musicians and asked how they make it work. One told me that she plays several hundred shows a year, lives on the road and typically earns as little as $200 a night; $1,000 a gig is the Big Time. Another group I met plays 200 nights per year while paying their band, travel costs, etc. and still has tight times.

Do the math. Some, of course, break through but for far too many it’s a constant struggle to earn enough to live a decent life, perform regularly, and still have time to create new music. Even worse if you have to pay other musicians, buy and maintain instruments, buy gas, plane, train, or bus tickets to get from gig to gig, pay for health care benefits (for the poor souls living in the U.S.), raise children, save for college and buy a home. Not to mention the costs of creating, producing/marketing a new album including recording engineer, producer, and studio time. Or there’s the team they need to line up gigs and stay on the road — the booking agent, tour manager, financial management, and legal support to make sure the contracts they sign protect their interests and income.

Related: “5 Free Android Apps You Might Not Know You Needed”

Now the new world of music “streaming” is changing the bottom line for musicians. I’ve been an avid Spotify user over the past few years after I learned how to use it without hurting the musicians I love. (Thanks to a note from one of my favorite artists, you can find that at NoDepression.com.) I had always seen a “Download” button on my Spotify page, but didn’t know what it was and couldn’t imagine that you could download an album or song you hadn’t paid for. That would be crazy.

Then recently, I decided to try out Apple Music. I found some great music exploring the “Browse” menu. I found an album that I hadn’t heard of and looked for a way to purchase it on the album page. I couldn’t find a “Buy” button so I pushed a button that said “Add” not really knowing what it meant or would do. Lo and behold, it downloaded the album on my laptop and my iPhone. How can that be? Why can’t I easily buy the album once I decide I like it?

More importantly, why would fans who aren’t aware of the economics of being a working musician buy an album that they could get for their $9.99 monthly Apple Music subscription — basically get it for “free.” I guess that the “Download” button on Spotify is what it says it is. I don’t blame the fans. We’re busy people and the business of music making is a mystery to most of us — we just know we love it.

To be clear, the streaming services are both here to stay and have both real upsides and troubling downsides for musicians. On one hand, an artist’s music can reach entire new audiences and if they get on the right playlists, it can be a significant career boost.

Related: “Where Do You Stream Live Concerts?”

On the other hand, most working musicians don’t earn enough from streaming to make ends meet.

A friend in the industry tells me that artists will earn more than they do now from streaming as the laws and practices change — but that they will never earn enough to make a living. A look at the current compensation scheme tells the story:

I recently spent four days at the marvelous Pickathon Festival outside of Portland, Oregon. I asked a number of people there if they buy music. Most didn’t but were subscribers to one of the streaming services. I then asked if they used to buy music. They all did.

Something is out of whack. We love the music but may inadvertently be making it harder for musicians to create it. Both streaming companies and fans can — and should — do things that would make it easier for musicians to earn a living wage while giving us all their talent and creativity.

For the Streaming Services

First and foremost, increase your rates. Second, make it easy to listen and buy, not just listen. You could also create a “tip jar” on artist pages for those of us that want to help. That would start to educate listeners on what streaming means for artists’ livelihood.

First, let’s educate ourselves and others that musicians are working people who live in the “gig economy” where you have to fend for yourself at every turn — one “gig” or album at a time. We get so much more from music than the price of a concert or album. The things we value shouldn’t always be reduced to a price but it’s worth remembering that musicians have a job — making music.

Remember — if they aren’t performing, selling their music or getting a steady stream of royalties then there’s no income. No regular paycheck like many of us have. Second, third, and fourth, buy their music. Go to their live shows and bring friends. Turn your friends on to new music.

Fifth, support artists directly. More and more musicians are crowdfunding the costs of producing a new album. Some are starting Patreon subscription accounts where you can pledge monthly support — any amount from $1 to $1000 — to support artists you love.

Finally, don’t stop listening to their music on streaming services (after you buy). In addition to the revenue, more streaming can increase placement on playlists and get the attention of the mysterious curators and algorithms that are increasingly the gatekeepers to our ears.

I haven’t decided yet which streaming service to use. Apple pays more but I like some of Spotify’s features more. If Apple would just add the “buy” button on the Album page that would seal the deal. Either way, I’m trying then buying. You should too.

1 comment on “Upstream Dollars: Streaming Music and a Living Wage”