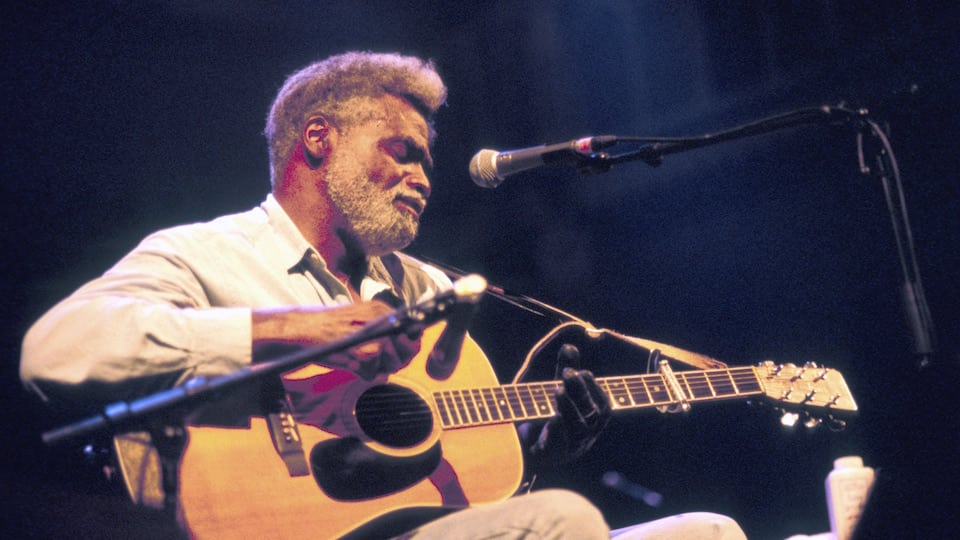 It is rare for an artist’s first album to fully capture the essence of their creativity. But Watch Your Step, the 1982 debut by the enigmatic Ted Hawkins (1936-1995), is the definitive testament to Hawkins’ superb gifts as a singer and songwriter. The album’s 15 tracks were recorded in the early ‘70s while Hawkins was a street performer in Venice Beach, but only released by blues label Rounder Records a decade later as he served a prison sentence at California State Penitentiary. Long out of print, Watch Your Step has been lovingly reissued on vinyl by Craft Recordings, allowing a new generation to discover this unique voice from the intersection of soul, rural folk music, and the blues.

A native of Biloxi, Mississippi, Ted Hawkins cited Sam Cooke as his primary vocal influence, and Hawkins’ powerful singing voice indeed bears the stamp of the gospel-tinged soul-shouters like Cooke, Otis Redding, and Wilson Pickett. Unfortunately, Hawkins’ early life was marked by a spell in reform school and multiple prison sentences. Drifting around the country, he eventually landed in California and began busking on the boardwalk in Venice Beach. It was here that blues producer Bruce Bromberg heard him and facilitated a series of recording sessions during which Bromberg captured Hawkins singing nearly a dozen original songs while accompanying himself on guitar, and four more backed by blues guitarist Phillip Walker’s band. After another prison stay took Hawkins off the street and out of Bromberg’s life for nearly a decade, the tapes remained unreleased until the producer finally tracked him down and negotiated a deal with Rounder Records (and the California penal system).

Though the tracks on Watch Your Step were practically a decade old upon their release, the depth, and honesty of Hawkins’ performances were too timeless to ever feel dated, and the album earned tremendous critical praise (including a coveted five-star review from Rolling Stone magazine). The sound you hear is raw, uncut soul filtered through the lens of a troubled life. Hawkins claimed that the years spent singing by the sand and salt air of the boardwalk brought a distinctive rasp to his voice, but it’s clear that his busking experience affected him on a deeper level, too. A street performer’s survival is merit-based, and throughout Watch Your Step Hawkins sings and plays with a conviction and authority that only comes from thousands of hours spent attracting the attention of passing strangers.

Besides the raw emotional power of his singing voice, the real discovery on Watch Your Step is Hawkins’ songwriting. His lyrics tell his own deeply personal stories about a dirt-poor childhood (“The Lost Ones”), infidelity (“If You Love Me” and “Watch Your Step”), and a persistent yearning for salvation (“Peace And Happiness”). His naturally flowing melodies and harmonic structures also contain a simplicity that would not have sounded out of place in the Brill Building two decades earlier, or on Music Row in Nashville three decades later! It’s easy to get wistful listening to Hawkins (Oh, what should have been!) but the music is uplifting enough to make one feel grateful for discovering it now.

Craft Recordings knows what precious cargo they’re handling, and has delivered this reissue of Watch Your Step accordingly. The decades-old recordings sound fresh and vital, and the 180-gram vinyl disc contains a replica of the original Rounder Records label (a very nice detail). Craft has also replicated the original 1982 album art in full, including the extensive, original liner notes on the back cover for serious music connoisseurs to pore over while listening. Hawkins would go on to enjoy some success as a performer overseas and recorded sporadically until his death from a stroke at age 58. The details of his turbulent life are available elsewhere online, but a thorough listen to Watch Your Step will tell you everything you really need to know. For those seeking the raw authenticity of American soul music from the front lines, Ted Hawkins’ Watch Your Step is essential listening about the human condition.