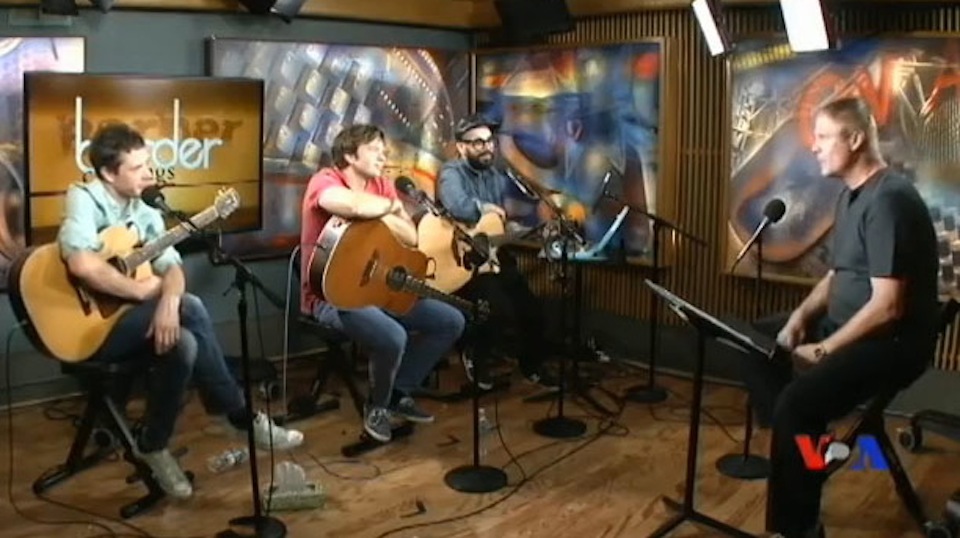 Sure, they have four albums to date — including Oh No, Of the Blue Colour of the Sky, and Hungry Ghosts — but OK Go’s special niche in the industry is actually the ingeniously conceived, flawlessly executed music video. This is the type of work that really makes you miss MTV’s heyday back in the day. But all is not lost. Not by a long shot. Treat yourselves now to four of the group’s finest video moments — two of them set to the very same song.

“Here It Goes Again” (July 2006)
50 million views and a 2007 Grammy can’t be wrong.  OK Go’s “Here It Goes Again” is one of the most exciting videos in recent music history.  If you are not one of the throng who delighted in the low-budget treadmill routine, head on over to YouTube right now and see for yourself how the group performs its complicated dance routine in a seemingly effortless way on eight motorized treadmills.  Rehearsing for a week at the home of their director-choreographer Trish Sie, OK Go created what Time magazine called one of the best 30 music videos of all time. And it got popular fast! “Here It Goes Again” mesmerized over one million viewers in its first six days on YouTube.

“This Too Shall Pass (Official Video)” (January 2010)
When the morning comes is the refrain of this song for which OK Go shot two separate videos. The first, the official Marching Band version with its humble homemade quality and buoyant spirit makes you feel that you can GO on and that everything will be OK, and not only when the morning comes but right this very minute. This official version — filmed in a single take (after 20 attempts) includes 125 members of University of Notre Dame’s marching band and 50 students from South Bend Indiana’s Perley Elementary and Good Shepherd Montessori Schools. A true group effort!

“This Too Shall Pass (Rube Goldberg Machine)” Version 2 (March 2010)
Don’t love band geeks? Well, OK Go shot a second version of “This Too Shall Pass” video in LA where the band performed in a huge totally mind-blowing Rube Goldberg Machine in an Echo Park warehouse. The machine is synchronized with the music, almost like it’s an amazing instrument made of metal balls, sledgehammers, tracks, paint bombs, flags and umbrellas. It took a crew of over 60 builders and production staff to get it right but the attention to detail paid off, landing this version in top ten most watched videos of 2010.

“Upside Down & Inside Out (Zero Gravity)” (February 2016)
We ask ourselves this lyric all the time: All those selves that you’ve tried, wasn’t one of them good enough? But how many of us have asked this while turning somersaults in mid-air? The OK Go guys shot this music video in a reduced gravity aircraft in a single 45-minute take. Any moments the plane wasn’t in zero gravity were simply edited out to give a feeling of continual freedom whether the band mates are opening and closing laptops, spinning chains in a whirling loop or pulling out florescent green and yellow suitcases from the overhead compartments only to releases them joyously into the air.