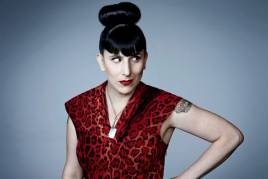 Kat Kinsman’s middle name might be “Compassion.” When she isn’t arguing about pie versus cake at the Southern Foodways Alliance Symposium or getting nominated for a James Beard Award for Best TV Segment, Extra Crispy‘s thoughtful Senior Editor has been creating a safe space for online dialogues around depression and anxiety. This year, she’s extending her kind reach even further with the website Chefs With Issues and her very personal book Hi, Anxiety: Life with a Bad Case of Nerves. So how did she get from food writing to mental health advocacy? Read on.

Q: How did the Chefs With Issues website come about?

A: I’ve been a food writer for almost a decade, but a couple of years ago, when I was the editor of CNN’s Eatocracy, I started writing for the Living section about my own struggles with depression and anxiety. The outpouring of solidarity and kindness was tremendous, and it opened the floodgates to conversation with loved ones, colleagues, and acquaintances—and also strangers. What started to happen was that I’d be interviewing a chef and during a break, they would go off the record and start to talk about mental health issues in their own kitchens. It happened once or twice and I thought oh, maybe they just feel comfortable. Then it started happening all the time, and I knew I had to do something and let people know they aren’t alone.

Q: When did this happen?

A: I was in a period of limbo waiting for edits on Hi, Anxiety and it seemed like a good project to take on, so it suddenly became my New Year’s resolution. I launched it January 1, 2016.

Q: What have the readers most gravitated towards on the site?

A: More than anything, people have poured their hearts out in the poll. I set up a poll to find out what people’s biggest mental health challenges, resources, restrictions, and treatment options were—along with a section where people could tell me whatever else they wanted to get off their chest. I thought I would get maybe a few dozen responses. Last I checked, there were over 1,500 respondents and I edited the free-form responses down into a 26k word document. People are desperate to be heard and to know they’re not alone.

A: I want people to know that there is hope, solidarity, and help. There is a list of resources—some of which are industry or region-specific—on the site at http://chefswithissues.com/resources/ and people can go to these websites and phone numbers to find mental health or addiction support.

A: I’ve got a book about anxiety [Hi, Anxiety] coming out on November 15, and I am wishing, hoping, wanting for it to help people realize that they’re not alone, and that they deserve compassion and care. Even though it was often difficult and painful to write, I have so much less risk than someone who isn’t a straight, white, married person from a cultural background without extreme taboo around mental illness, with access to insurance and mental health care, and an employer that understands and supports me. If I can’t speak up, who the hell can? I want to help normalize the conversation around mental health to the point where in the near future, not only would everyone have the ability to get affordable (or free!) mental health care—but doing so would pack a stigma roughly equivalent to going and getting a cough or sprain checked out. We can and must do better by one another.

Q: What’s the response been like to Chefs With Issues?

A: The hugs have been extraordinary! (Chefs are intensely good huggers.) But even more than this—I’ve had my heart cracked open what feels like a million times by people’s stories of their lowest points, and the peers they’ve lost. Periodically, I’ll just need to step away because it does take an emotional toll, but the friends I’ve made through this far outweigh any secondhand pain.

0 comments on “Chefs With Issues and One Writer Who Cares”