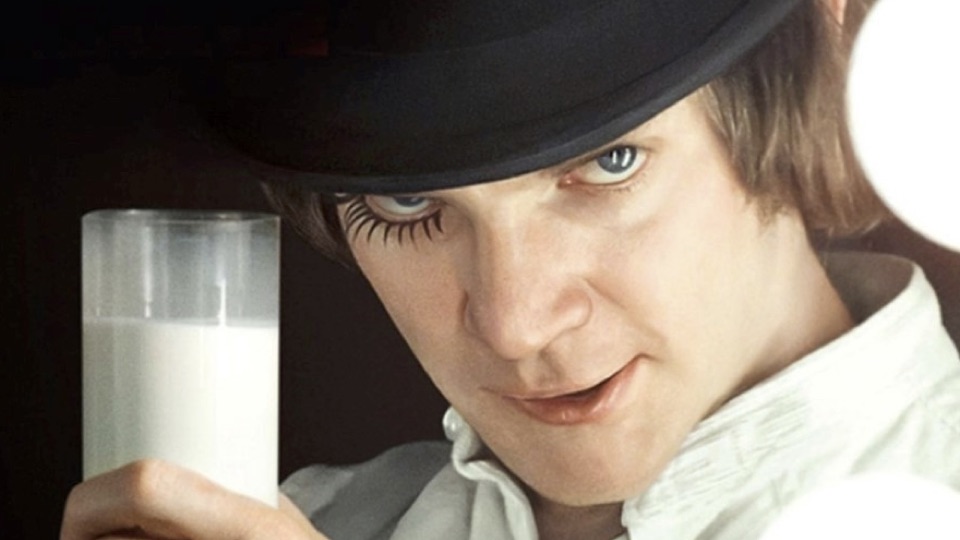 It’s been noted that rock groups are basically gangs who, if they’re not too wasted, think they can lay to waste anyone who dares to cause harm to a fellow gang member. It was also noted via a 1967 “petition” that a singer in a rock group should act as a harmful gang member in a movie called A Clockwork Orange. That is, the faux petition demanded that Mick Jagger play the film’s lead role and was signed by all four Beatles, Marianne Faithful, and Anita Pallenberg. It was then sent to the two Clockwork screenwriters: Terry Southern (Dr. Strangelove) and photographer Michael Cooper; who snapped the iconic cover photos of Sgt. Pepper’s Lonely Hearts Club Band and the Stones’ Their Satanic Majesties Request. Southern and Cooper ignored the playful petition; which read:

“We, the undersigned, do hereby protest with extreme vehemence as well as shattered illusions (in you) the preference of David Hemmings above Mick Jagger in the role of Alex in The Clockwork Orange.”

Unfortunately, Southern (who along with producer Si Litvinoff owned the rights to the 1962 book) and Cooper were intent on hiring Hemmings (Blow Up, Barbarella) to play Alex DeLarge and Richard Lester (A Hard Day’s Night, Help) to direct. But after Lester turned down the gig, Cooper elected himself to direct only for Hemmings to refuse the role. Mick and his fellow Stones were back in the picture; only for the project to temporarily die after a treatment was delivered to the Lord Chamberlain; who under the British censorship regulations of the time, could approve or disapprove of screenplays. The Lord Chamberlain in 1967, who was saddled with the Dickensian name of Cameron Fromanteel Cobbold, stated, “I know this book and there is no way you can make a movie of it. It deals with youthful incitement, which is illegal.” And after experiencing drug busts that resulted in short stays in prison, Keith and Mick were understandably leery of having to possibly spend another day in a courtroom.

Litvinoff then approached director John Schlesinger (Midnight Cowboy, The Marathon Man) to film Anthony Burgess’ novel. In 2008, a letter from Litvinoff to Schlesinger was found; where Si claims that Jagger will play Alex and the Beatles would provide the score. Even the mention of the Beatles providing songs to accompany the hooligans’ crime sprees (perhaps “Run for Your Life?”) could not sway Schlesinger and later Nicolas Roeg (Performance, The Man Who Fell to Earth) to helm the project.

The revolving door of directors stopped once Si and Warner Brothers finally agreed that Stanley Kubrick would be the one to take a crack at Clockwork. Kubrick had long been enamored of the novel ever since Southern gave him a copy of it on the set of Dr. Strangelove. But an experienced director like Kubrick wasn’t about to hire an inexperienced actor to play the title role and wasn’t interested in filming Southern/Cooper effort.

“Cast deep in your pocket for loot to buy this disc of groovies and fancy words. If you don’t have bread, see that blind man— knock him on his head, steal his wallet, and low and behold you have the loot, if you put it in the boot, good, another one sold!”

However, the Stones’ record labels on both sides of the pond were not amused by Oldham’s fan-boy tribute and covered up his promotion of violence by pasting a new back cover over the original which Capitol Records would do a year later to the front cover of the Beatles’ infamous, baby-butcher Yesterday…and Today album.

But despite his efforts, Oldham’s dream of seeing Keith, Charlie, Bill, and Brian as Mick’s cinematic droogs went for naught. In 2007, he lamented:

“I couldn’t get the rights to make A Clockwork Orange because Anthony Burgess thought that he had cancer and just wrote furiously and took money in from others.”

Yes, it would have been “different” to see Mick and Keith acting out the roles of two “Midnight Ramblers” and doing the ol’ ultra-violence on a screen. But Oldham and the world can take solace that at least there wasn’t a sequel to A Clockwork Orange; perhaps one featuring an elderly Alex and his droogs watching TV in a retirement home’s recreation room. As the old gang gleefully gaze at a 1952 musical on TCM, they set aside their walkers, pop black bowler hats on their bald heads and anxiously wait for the moment they can once again warble along with Gene Kelly to “Singin’ in the Rain.”

1 comment on “Paint It Orange: The Stones and A Movie That Almost Was”