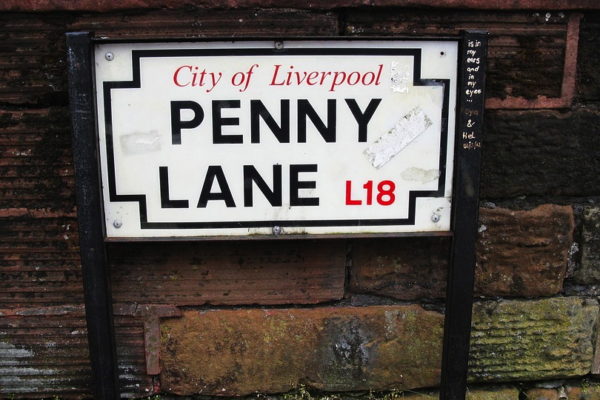 Editor’s Note: This post, originally published way back in 2016, is one of our Greatest Hits. Since a lot of you weren’t visiting us then, it seemed a good time to bring it back…

In February of 1967, The Beatles released a groundbreaking double A-side single. On one side was a Lennon song, “Strawberry Fields Forever,” that had been transformed in the studio thanks to the contributions of the other Beatles along with producer George Martin and engineer Geoff Emerick. On the other side, was McCartney’s imaginary stroll down one of Liverpool’s main thoroughfares, “Penny Lane.”

Like The Beach Boys’ “Good Vibrations,” which had been released a few months earlier, “Penny Lane” kicks off with a vocal, skipping any kind of introduction. McCartney narrates the scene around Penny Lane with a wonderful, rolling melody over steady piano chords. Martin provides a score of brass and woodwinds to help conjure up the scene while Lennon and Harrison contribute background harmonies.

McCartney pulls off a difficult songwriting feat by placing the verses and the choruses in neighboring keys (the verses are in B and the choruses are in A). At the end of the song, McCartney writes a key change so that the final chorus is in B, bringing the song full circle. Yet, it’s in the verse that McCartney injects a magical chord that helps make “Penny Lane” a case study in great songwriting. I’ll let you in on McCartney’s secret in this video.