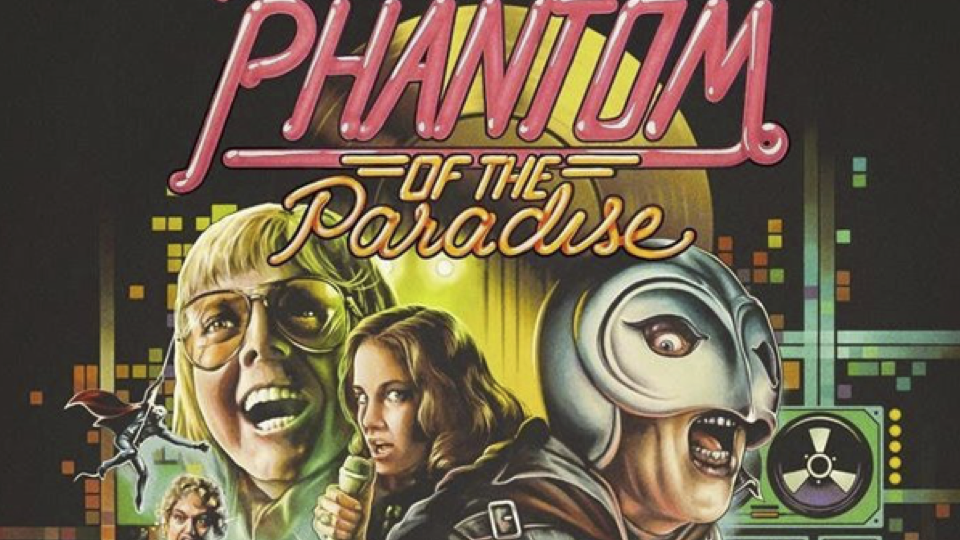 When film buffs think of Brian De Palma, crime classics like Scarface (1983) or The Untouchables (1987) spring to mind. Horror fans love his twisted gorefests, Sisters (1972), Carrie (1976), and Dressed to Kill (1980). But it is the misunderstood and often overlooked fantasy quasi-musical Phantom of the Paradise (1974) that many fans feel is the auteur’s true masterpiece. Director-cinephiles Guillermo del Toro, Edgar Wright, and Quentin Tarantino have all sung its praises but the movie is still stuck in the cult chasm.

Part of the problem is timing—rock operas like Hair and Jesus Christ Superstar were huge in the late sixties and early seventies, and while The Rocky Horror Picture Show was playing off-Broadway, it was still a year away from the big screen and even further from its midnight-madness shadow-cast significance. Phantom fell between the cracks then but it does have a small-but-vocal fanbase now.

The baroque fable follows a facially scarred, masked composer who sells his soul so that the woman he loves will find fame singing his songs but the contract holder betrays him and steals his tunes to use as the soundtrack to his decadent rock palace, The Paradise. It is a marvelous mashup of Phantom of the Opera, Faust, and The Picture of Dorian Gray, with a twist of the Marc Bolan Variety Show. While the flick kicks jaded corporate rock’s ass with glittery platform boots, the story also tickles at the soft underbelly of the artist’s blind optimism. At its heart, it’s a classic monolith vs underdog story.

The tone is set by the revered Rod Serling, who opens the show with a wink to The Twilight Zone: “Swan… he has no other name. His past is a mystery, but his work is already a legend. … Now he is looking for the new sound of the spheres, to inaugurate his own Xanadu, his own Disneyland: The Paradise, the ultimate rock palace. This film is the story of that search, of that sound, of the man who made it, the girl who sang it… and the monster who stole it.”

The diminutive Paul Williams is “the monster who stole it” as Swan, a megalomaniacal music producer; an earnest William Finley is Winslow, the aspiring songwriter who gets taken for all he has and is left disfigured for his trouble; and “the girl who sang it” is the ingenue, Phoenix, played by a coltish 24-year-old Jessica Harper in her first starring role. The actress, who is now best known for her work with (a pre-#MeToo) Woody Allen, snagged the part because of her beautiful singing voice, which was utilized to great effect by De Palma. The score and soundtrack were written entirely by Williams and Phantom was also his first film role—he would go on to win the Best Original Song Oscar for A Star is Born in 1977 and has acted in over 90 films to date. Harper is also still in front of the camera; she can be seen in the critically-acclaimed cannibal-romance arthouse feature, Bones and All (2022). Finley passed away in 2012 at the age of 71.

Although Phantom was nominated for an Academy Award for Best Music, Scoring Original Song Score and/or Adaptation, and a Golden Globe Award for Best Original Score: Motion Picture, it was a financial flop that was quickly written off in the major markets. And yet… Phantom found fandom in two unexpected pockets of the world: Winnipeg, Canada, and Paris, France.

In an interview for the film’s 45th anniversary, Paul Williams considered its (and his) legacy, saying, “I think the eye-opener for me is that if Phantom had been even a mild success, it would probably be gone by now. The big lesson is don’t discard something as a failure. Give the universe a chance. Give people a chance to communicate with each other. What’s remarkable is these people that love this film … The guys from Daft Punk met at a screening of Phantom, [and they never forgot that] so I wound up writing the lyrics to their songs ‘Beyond’ and ‘Touch’ and singing on the Random Access Memories album because these guys saw Phantom 20 times together.” Just take a look at Winslow’s mask and Daft Punk’s helmets and you’ll see the influence. (While De Palma hasn’t directed any of DP’s music videos, you have seen his work on MTV with Frankie Goes to Hollywood’s “Relax” Body Double version, and Bruce Springsteen’s “Dancing in the Dark.”)

The writer-director never said much about Phantom until the advent of a 2-disc Blu-ray which was released in 2014—it contains a wealth of information on the making of, his methodology, and how he inadvertently based Winslow on himself. Winslow is a true artist who would rather toil in obscurity concocting cantatas than get rich and famous jotting off pointless pop jingles—while De Palma seems happier making movies like Phantom, he’s found the best of both worlds, as he’s also managed to make a fortune directing high-profile blockbusters like Mission: Impossible (1996). And he’s still working to this day, with his 32nd film, Sweet Vengeance, now in pre-production.

Fair Use image from movie poster of “Phantom Of the Paradise”

4 comments on ““Phantom of the Paradise”: DePalma’s Misfit Movie”