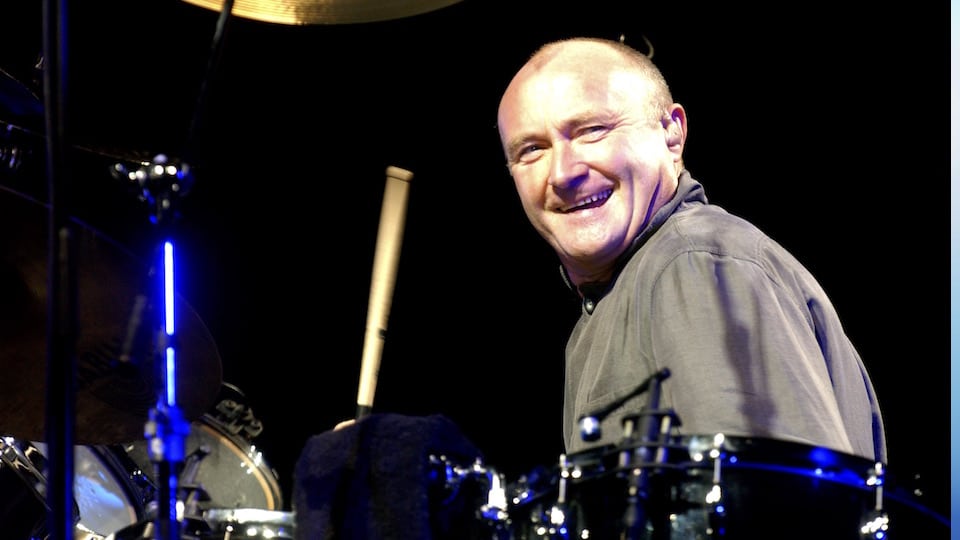 Phil Collins Plays Well With Others is a perfectly positive title for a four-disc release encapsulating a career which Phil Collins has found himself in the unenviable position of constantly defending. More so than Lionel Richie, Barry Gibb, or solo Paul McCartney, Collins has been a source of continual ridicule inspired by questionable choices.

In a life of Miami Vice cameo-ing, movie star chumming, Tarzan sound-tracking, and Swiss high-living, Collins has repeatedly put himself at the mercy of his harshest critics and disparaging fans. Yes, he claims he never wanted to leave the drums to take the place as Genesis’ frontman but he did. Yes, he claims that Duran Duran was also meant for that money-burning Live Aid flight from Wembley to Philly but did he have to go by Concorde? However mindful he was of the homeless or the immigrants, Another Day in Paradise or Illegal Alien still come across as patronizing at best. Frankly, Tony Banks had every right to resent In the Air Tonight outselling the entire Genesis catalog. Or did he? Perhaps, the time has come to put such grievances aside.

For, in reality, Genesis profited immensely from Collins’ solo success. How else would they’ve had a chance to play at stadiums and arenas? And aren’t Genesis songs “Please Don’t Ask” and “Misunderstanding” marked by Collins’ nakedly emotional lyrics and raw vocal delivery? And didn’t he drum for former Genesis front Peter Gabriel’s solo demos in 1976 as well as his third album Peter Gabriel/Melt, one of his finest? Can we hear it for the team players?

Plus, all the while Collins was banging the drums with a mastery for which he rarely gets credit despite the praise of peers like Chester Thomson, Bill Buford, Roger Taylor, and Taylor Hawkins. And his career expands way beyond the obvious. As a child, he pops up as an extra in A Hard Day’s Night (1964) then ended up recording “Angry” with Paul McCartney and backing George Harrison on “While My Guitar Gently Weeps” at the 1987 Prince Thrust. He even played Abbey Road solos for George Martin. In short, he’s lived every Beatle fans dream. (All three of these tracks are presented on this four-https://wp.me/p6VPP8-4W1disc set.)

Related: “Genesis Tour Manager Recalls His Role In One of Rock’s Most Embarrassing Moments”

You may remember him first and foremost as an ‘80s crooner but it’s as a sticks-man that he’s at his best. Banks and Gabriel watched his 1971 Genesis audition with amazement, then revealed as the 19-year-old brought ballast and excitement to their live performances, even as they searched for a permanent lead guitarist (eventually Steve Hackett). That wasn’t his first band either. Prior to that, in the bluesy band Flaming Youth, Collins had brought some free jazz percussion to songs like “Guide Me, Orion.” Indeed, jazz was a style that Collins would return to on his later side project Brand X. “Nuclear Burn,” a fine example of slow steely playing, is one of the more interesting, esoteric tracks on this anthology which, given that Disc One also features collaborations with John Martyn and Brian Eno, is really saying something!

Such were his drumming powers that Pete Townshend earmarked him to replace Keith Moon in The Who. While this never came to pass, he did evoke Moon’s erratic rhythmic style on Frida’s “I Know There’s Something Going on” and unleashed his inner John Bonham on John Cale’s “Pablo Picasso.”

As a drummer, Collins played his part, often without fuss and little credit. As ubiquitous as he was on TV chat shows, he similarly appeared on cassette tapes with omnipresent aplomb. He brought the groove out of Robert Plant (“In the Mood”), added rock ballast to Chaka Khan (“Watching The World”), and joined the chorus for “Do They Know Its Christmas?” Among such company, his Genesis tracks are comparatively unimpressive, although his harmonizing vocals with David Crosby on the co-penned “Hero” are definitely charming.

Tellingly, the compendium’s most successful disc (disc four) is a live collection as Collins curates from over 20 years worth of live performances — crashing the intro of “You Win Again” for the Bee Gees, hitting the hi-hat for Clapton’s “Layla”, clapping out a beat for “Chips & Salsa”… Showy when needed, he’s a generous supporting drummer, both in and out of the studio. Stop giving this man a hard time! This is a Phil Collins album worth buying.

4 comments on “Phil Collins Really Does Play Well With Others”