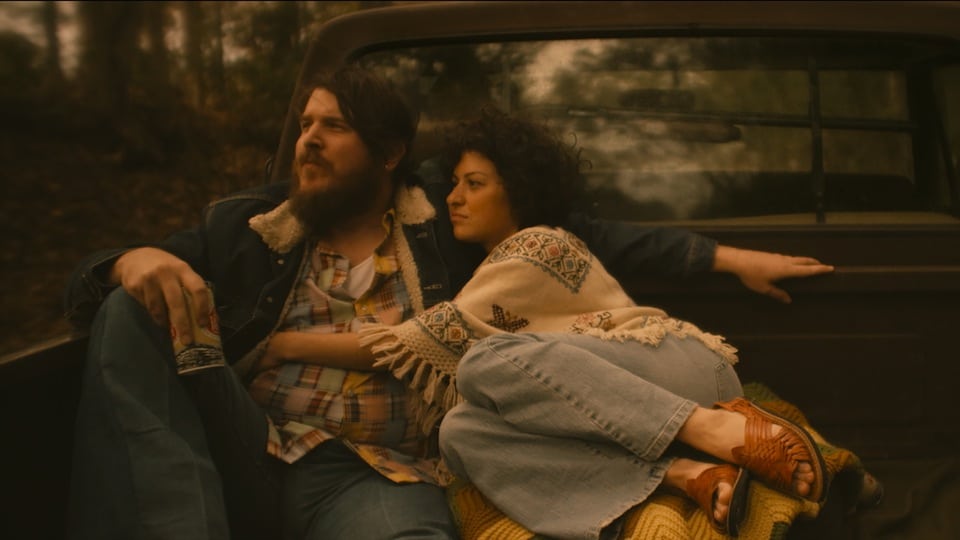 “Do you think it’s possible you could live forever?”
“People can’t. A song can. Just a matter of time.”

Those lines have stuck in my head in the days since seeing Blaze, Ethan Hawke’s sweetly shambling biopic of the fringe and mostly forgotten Arkansas singer-songwriter, Blaze Foley. Also in my head: Foley’s music, as performed on the soundtrack by the cast, most notably musician Ben Dickey, who delivers a soulful, authentic performance in his first acting role. The film chronicles the professional life and tragic death of the mostly Austin-based artist, skipping in time from his last, fateful night back to his early, Edenic days “living in the woods in a tree” with wife and muse Sybil Rose (played by Alia Shawkat), whose memoir of that time serves as the beating heart of Hawke’s screenplay. After his break with Sybil, Foley entered the orbit of country-blues legend Townes Van Zadnt (Charlie Sexton), each man seeming to fuel the other’s best musical — and worst personal — impulses. Hawke glides from good times to bad, highs and lows, his characters most often holding a guitar, a bottle, or both.

Related: “Chet Baker/”Born to Be Blue”: The Tortured Life of a Jazz Artist”

After playing the trumpeter and singer Chet Baker in the 2015 biopic Born to be Blue, Hawke concluded that, for all his acting technique, one part of Baker’s story eluded him: He could never understand the depth of Baker’s relationship to his instrument. For such stories, he realized, it would be better to cast a musician and teach him how to act than the other way around. Hawke’s theory proves out: Novice actor Dickey is terrific as Foley, bringing an honest, open vulnerability to the role, especially in his scenes with the equally terrific Shawkat. Apart from its indelible songs, Blaze is at its best in its small moments like Foley trying to make a good first impression on Sybil’s middle-class Jewish parents and Foley’s and Townes’ drunken carousing in a rented New York ballroom. It falters a bit on a few Very Important Turning Points, such as Foley’s final break-up with Sybil or the scene of Foley’s death, which looms over the film from the start but whose depiction feels more like a begrudging necessity.

Blaze is infused with music. In fact, if you called it a musical, you wouldn’t be far off. The film offers an excellent introduction to Foley’s songs, eight of which appear on the soundtrack (newly released on vinyl, CD and digital by Light in the Attic records), featuring performances by Dickey, Shawkat, and other members of the cast. “Clay Pigeons” is a perfect, achingly beautiful song, showcased here by Dickey’s slightly weary but wonderfully unsentimental rendition. “I Shoulda Been Home” is another standout, a driving, honkytonk Dylan-esque lament, with Dickey’s performance backed by fiery harmonica. Shawkat holds her own in two duets with Dickey, a delightful cover of Roger Miller’s “Oo-De-Lally” and the charming, blues-y “Blaze & Sybil’s Lullaby,” written by Dickey. The soundtrack is rounded out by covers of the Van Zandtz’s “Marie” (performed by Sexton), and Lucinda Williams’ ode to Foley, “Drunken Angel” (performed by Alynda Segarra who appears briefly in the film as Foley’s sister Marsha).

Did drink and depression form a self-destructive streak in this otherwise too-sensitive soul, or was the fuse always there, ready to be lit? Thankfully, the movie doesn’t suggest a causal link between Foley’s art and his demons. Rather, it presents a portrait of a conflicted man as seen through the eyes of his friends and loved ones, during some of his best and worst moments. Here’s an artist who could never find the success he deserved in life, but whose legacy just might live forever.