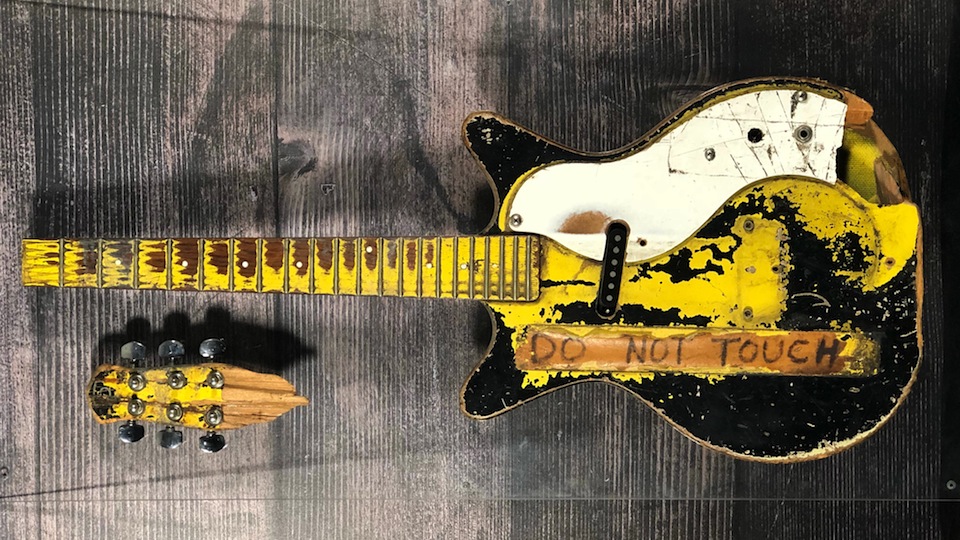 This post, from 2018, is one of our all-time most popular. It really is one of the coolest little nuggets of rock history we’ve encountered, so it seemed a good time to revisit it. We hope you enjoy it as much as we did.

For musicians who grew up in the last half of the 20th century, the words “48th Street” conjure up vivid memories of the epicenter of NYC’s robust music industry. The Big Apple’s Music Row was a cluster of instrument retailers along West 48th Street between Sixth and Seventh Avenues, which could service the needs of literally every musician on the planet. World-famous legends, touring sidemen, local session cats and working pros, music teachers, garage band amateurs and beginners, and tourists from around the globe; they could all come to 48th Street and find the tools they needed to bring the music in their hearts to life. After weathering cultural and stylistic changes from the big band era to late-‘90s electronica, the shops slowly faded away as brick-and-mortar retail gave way to 21st-century e-commerce. But an entire generation of musicians continues to cherish their memories of Rudy’s, We Buy Guitars, Alex Music, and others as essential elements of this city’s rich cultural history.

One name not only dominated 48th Street but also possessed a unique cultural artifact that signified the energy of the street and the unity of musicians everywhere. Manny’s Music was a leading music retailer and New York institution for over six decades, epitomizing both the glory and the grind of the music biz. Founded by Manny Goldrich (1904-1968) and famous for its Wall of Fame of signed photos, Manny’s was also home to a guitar called “Old Yellow.” Old Yellow was the unofficial “tryout” guitar at Manny’s: all customers, from average Joes to ex-Beatles, were required to play it when testing out amps or effects. Today Old Yellow is owned by the Sam Ash corporation, and carries a tag that reads, in part: “This guitar has seen more action than a Quentin Tarantino movie!”

The guitar is rightfully poised to enter the Rock and Roll Hall of Fame, as part of an upcoming Manny’s-themed exhibit. Ian Goldrich, Manny’s grandson, is both humble and proud of his family’s legacy. “I said to the curator of the hall,” explains Ian, “‘I understand why The Who and Jimi Hendrix are in there, but I’m not quite understanding why you’d want to do something about Manny’s.’ To which the curator replied, ‘We’re not just a museum. We’re here to educate people. And the Manny’s story and the music history of New York is really important to how we’ve gotten to where we are and why the Hall of Fame is what it is.’” That story continues to unfold today, as the heirs to Manny’s Music have now joined forces with former 48th Street neighbor and competitor Sam Ash. But let’s not get ahead of ourselves.

The arrival in the 1950s of Elvis Presley and Buddy Holly, along with the musical and sonic innovations of Les Paul, generated a growing interest in the guitar. But it was The Beatles’ legendary TV appearance on The Ed Sullivan Show on Feb. 9, 1964, that proved to be the instrument’s game-changer. Fred Giovanelli, a Sam Ash employee for over three decades, relays a story told to him by Jerry Ash. “Jerry says to me, ‘Back on February 8, 1964, my store was filled with guitars. Electric, acoustic, basses, everything. By February 12 or 13 there wasn’t one guitar in the store to be had! After The Beatles played, the kids ran into the music stores and wiped the shelves clean! It took several months to start restocking the stores with electric guitars.’”

“You gotta understand,” Fred continues, “rock and roll was not electric guitar-driven at that point; nobody thought of Buddy Holly as a ‘guitar hero,’ you know what I mean? But now you’ve got a unit where everybody’s equal, and everybody’s got 25% of what makes the song the song. Plus you saw these flashy guitars, solos…it was guitar-driven, and the kids went wild.” Ian Goldrich confirms: “The Beatles kicked it up a big-time notch. It made certain companies; I mean, look at Rickenbacker! They really took advantage of that whole thing.The British Invasion was a jump-start to the heart of the New York City music industry. A new breed of rock stars meant a new breed of customers to the music stores, and the centrally-located Manny’s was primed to accommodate this glamorous new clientele. By this time Manny’s son Henry was working at the store, and just as his father made the store a comfortable “hang” for the jazzers of the previous era, so did Henry welcome The Beatles, The Who, Jimi Hendrix, The Byrds, and countless others into Manny’s. “My father just treated them like regular guys,” Ian says. “He didn’t fawn all over them. He also kept people away when these guys came in, and the guys who worked in the store were never allowed to ask for autographs. And because these stars came in so often the people who worked there were sorta like, ‘Oh that’s kinda cool.’ It’s not like today where it’s on everybody’s social media, tons of pictures and things like that.”

“Someone like Pete Townshend would walk in,” Ian continues, “and Henry would say “Hey Pete! Whaddaya doin’? C’mere, I gotta show you this guitar!” But it wouldn’t be like “Great to see you,’ you know, wouldn’t fawn over him. The old store at 120 West 48th Street had a room upstairs where the guitars were, and he would bring them in that back area of upstairs. It was the same sort of thing when we moved to 156 West 48th. There was a little back area where it was cordoned off, you couldn’t even really see it. And that’s where these guys would go and hang. And they would hang! It would be amazing how many stars would be in the store at any given time.” It wasn’t long before young Ian began to realize that there was something special about the family business. “My brother Judd is two years younger. John Entwistle went to my brother’s bar mitzvah; that’s 13, so I must have known something at 15, you know (laughs)?”

Henry routinely purchased used instruments for resale, and on this day a person (or persons, details are sketchy) brought in a full set of instruments repainted with new, bright colors. Among them was an unremarkable Danelectro guitar that had been painted bright yellow. “It wasn’t a factory color,” Ian says. “In fact now that the guitar has aged, you can see it probably came from the factory as black. It had this little lipstick pickup in it, all stock parts, just the color was different. So it was an off-the-street buy; it didn’t come from the company.” The other repainted instruments were eventually sold, but “the yellow guitar” hung around.

By this time Henry was well-known for his strict policy of forbidding customers to try out new guitars unless they were serious about buying them. NYC guitarist Jack Morer, a Manny’s employee in the mid-80s, remembers his own shopping trips there years earlier: “As a kid, you’d come into the city, and you’d go to Manny’s and say ‘Hey can I play that guitar?’ And someone would always be asking you ‘Are you buying today?’ And they were always really impatient.” Ian concurs: “Listen, 48th Street was not an easy place to buy an instrument. It was intimidating, and it was New York at its finest and worst depending on how you consider it, you know? If you walked into Carnegie Deli, those waiters were not all warm and fuzzy. And that’s kind of how 48th Street was: it was ‘Show us your money, kid!’ It didn’t start on 48th Street but we were certainly a part of it.” Henry’s “show us your money” approach was fair enough; no shopkeeper wants his wares damaged pre-sale. But where did that leave customers looking to test out new amplifiers or effects pedals, who actually needed a guitar to play?

“My father realized Old Yellow was a good-playing guitar,” Ian says. “He paid nothing for it basically, and he wouldn’t sell it. So when somebody wanted to try out an effects pedal or an amplifier he wouldn’t let you pull down a new Strat out of the showcase; he said ‘Here, this is the tryout guitar.’” From that point on, it didn’t matter if you were Joe Blow from the Bronx or Joe Walsh from The Eagles: if you were in the market for a new amp or effects unit, you played Old Yellow. The guitar passed through countless famous (and not-so-famous) hands over the ensuing decades. “Everybody who played it said it played really well,” says Ian. “My father tells the story of George Harrison, Paul McCartney, Bob Dylan and John Sebastian sitting in the back of the 156 building, so it’s gotta be in the mid-70s or something like that, and they’re all passing this guitar around when George offered my father $200 to buy it. And my father turned him down!”

Eventually, however, “Old Yellow” met an abrupt end of sorts. “It fell off a guitar stand and the headstock broke off,” Ian says. “That was the end of that.” Despite being damaged beyond repair, the guitar remained in a glass display through the ‘80s and ‘90s as a totem of years past. But as the ‘90s wore on, the tide began to turn for Manny’s. Because of shifting economic factors better explained elsewhere, Manny’s officially closed its doors in 2009.

As for Old Yellow, the guitar currently lives at the flagship Sam Ash store on 34th Street in NYC. But Ian Goldrich hopes that it will soon take its rightful place in the Rock and Roll Hall of Fame. “The Hall actually paid for the removal of the facade sign,” Ian says. “And then there was a piece of marble out on the front in the sidewalk, and they paid to have that removed as well. They spent a good amount of money and they’re restoring it right now to set up a Manny’s exhibit. So I’m hoping that’s where it ends up. It was as much a part of the history of Manny’s as the building.”