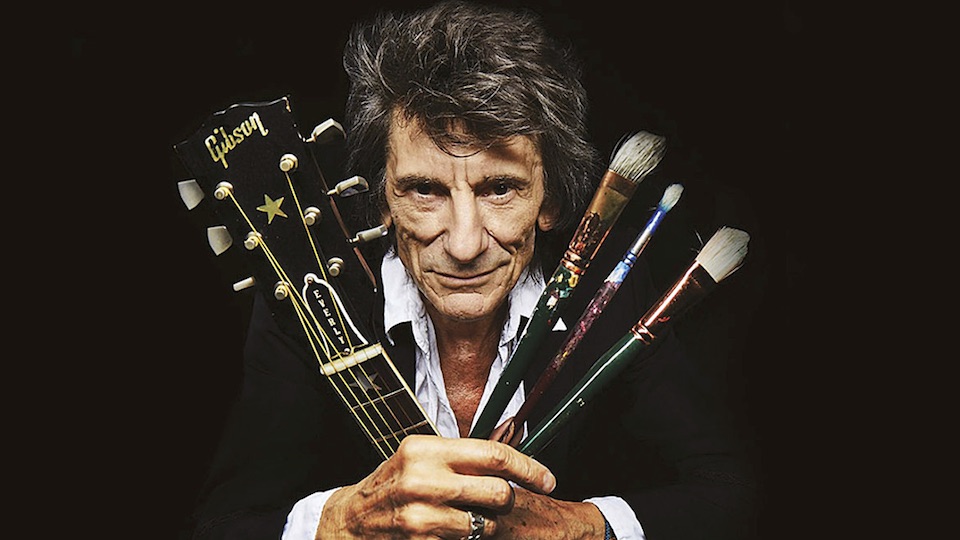 Forget Ian Brown’s penchant for conspiracy and Morrissey’s notorious eagerness to shock: Ronnie Wood is the rock star most deserving of your attention. He’s the subject of this year’s most interesting rock documentary (Ronnie Wood: Somebody Up There Likes Me) a film that calls attention to the many sides Wood has at his disposal.

To some, he’s the polished rocker with a hairstyle that matches his buoyancy; to others, he’s the mercurial musician who wrote the killer guitar patterns of “Stay With Me” and “Beast of Burden.” It was because of him that Small Faces switched to the tastier sounding “Faces,” just as it was to his guitar that Rod Stewart belted out his most committed vocals. Stewart is one of many musicians who pops up in this film to profile a man they know intimately, as well as professionally. It’s a kaleidoscopic portrait of the guitarist as a fully-formed artist.

[Ronnie Wood: Somebody Up There Likes Me will be shown as a virtual cinema release starting on 9/18. Learn more here.]

Director Mike Figgis brings us a musical history, as witnessed by his star subject. The Rolling Stones, traditionally a somber unit (watch Charlie Watts’ casual dismissal of Jimmy Page for evidence), were wowed by Wood’s appetite for fun and frolic. “It brought a very different mood,” Mick Jagger recalls, chuckling at the many alternative players who might have otherwise led the band into more ponderous territories. Furthering the point, Keith Richards says: “This band works on two guitars, and it’s very important who they are.” Joining the band in 1975, Wood was the third guitarist to spar with Richards. Predecessors Brian Jones and Mick Taylor had amassed twelve years between them, but Wood held firm and still prides himself as the invisible voice that harmonizes between Jagger and Richards.

Related: “Reconsider Me: The Rolling Stones ‘Black and Blue'”

Singer Imelda May describes the guitar interplay between Wood and Richards as a fabulous dance, describing the choreography needed to bring a rock song from recording to “spectacle.” Despite his past wild reputation, Wood can also be a man of tremendous restraint and discipline. Opening himself up to the camera, Wood unveils a painting that requires sustained thought and effort. It’s an inspired way to open a rock movie, reminding viewers of the patience needed to spark that electric flow on record and on stage.

The Jeff Beck Group was the band that first introduced the world to Wood’s abilities. Back then, he was known as “the bass player,” but his lip was just as battle-ready then as it is in 2020. Recalling being asked if he would return to the group after missing their premier American tour, Wood remembers with relish the financial demands he threw towards manager Peter Grant.

These days, Grant is best known for his work with Led Zeppelin, much as Wood is most instantly recognized for his contributions to The Stones. Both men worked with Rod Stewart in the sixties, a vocalist with whom Wood maintains a tremendous friendship. With his talents as a bassist and a guitarist, Wood played on Stewart’s classic “Maggie May,” probably the most fondly remembered ballad in Stewart’s catalog.

Wood himself peaked in the summer of 1973 with a supremely beautiful song entitled “Ooh La La,” and Wood treats his viewers to an excerpt of the jaunty number. The song, once a bastion of youthful defiance, now has a hidden sadness to it, partly due to the deaths in recent years of his Faces bandmates Ronnie Lane and Ian McLagan. Time, as it does to everyone, has mellowed Wood, a man who looks at his drinking habits with equal amounts of admiration and horror. It was another death – that of a teenaged love – that drove him to alcohol, and Wood’s dependency on the drink was every bit as creative as it was destructive to his development as both a musician and person.

Stewart surmises that illness as one that was typical of seventies rock ‘n rollers. The Faces prided themselves on being a party outfit, availing themselves of many of the steamier practices the industry offered them. Richards, a guitarist equally as famous for his imbibing, pictures a nastier side to Wood while he was under the influence. And yet both Richards and Stewart found the time to understand Wood’s hyper-kinetic approach to performance and to see the majesty that hid behind every pint.

So, while this isn’t a hagiographic feature, it’s still a very good one, offering viewers the kind of detail Wood brings to every project he works on. Behind the clothes, caricatures and chords is a person every bit as intricate as any art piece he puts on display.

1 comment on “Ronnie Wood: Somebody Up There Likes Me”