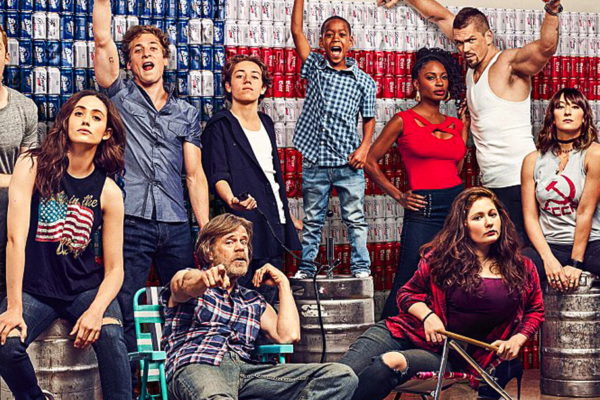 Admittedly, I myself came to the debauched party that is Showtime’s Shameless a couple of seasons late. Yet I’d argue, even now with the start of a new season, that you too still have time — indeed should make the time — to catch up. Yes, it’s crass and spends an inordinate amount of time in the bathroom, but that’s where the characters are constantly blacking out, drinking, fornicating, fighting, healing, playing, and just plain peeing. Where else should they be? This is a gloriously dysfunctional family living in an inherited ramshackle house on the south side of Chicago. Don’t begrudge them their insanities and potty humor. Instead, join the madness with this helpful cheat sheet.

• Frank Gallagher (William H. Macy): The patriarch is a congenial sociopath, alcoholic drug addict who relishes the notion of heading the homestead but not in guiding his six kids. His narcissism is something to behold.

• Fiona (Emmy Rossum): The feisty, self-sacrificing oldest daughter raises the unruly brood as best she can and ensures that by hook or by crook her siblings are clothed, fed and sent off to school.

• Lip (Jeremy Allen White): The oldest brother in the family comes across as a brooding, brilliant “bad boy” with incredible game with the ladies.

• Ian (Cameron Monaghan): He’s a classic middle child who, in this case, is comfortable with his homosexuality but not with his bi-polar disorder.

• Debbie (Emma Kenney): The youngest daughter is an endearingly gullible adolescent, doing her best to adapt to the chaos.

• Tiny Liam (Brenden Sims): The youngest son may have a different bloodline but this wide-eyed child is embraced by the rest nonetheless.

To date, Shameless has taken its viewers on a crazed odyssey of love, betrayal, shifting partners, crime, punishment, and redemption. Fiona’s best friend Vee (Shanola Hampton) and her husband Kevin (Steve Howey) are supportive neighbors churning up their own form of madness in the bedroom. In fact, it’s worth noting that Shameless is a series that’s literally riddled with sex…often funny, sometimes tender, frequently gross, occasionally doomed. What it isn’t is gratuitous. Instead, Shameless sex represents the life force in a family often short on funds but never spirit. The Gallagher modus operandi may be to mess things up but to their credit, they are hell-bent on getting by and bouncing back.

How does this deliciously hapless family stay fresh? Most of the praise should go to the cast. Joan Cusack got an Emmy nomination for her role as Sheila Jackson for five years running before winning in 2015. (Her character Sheila is a sweetly idiosyncratic, agoraphobic yet loving mom to a devil’s spawn of a daughter and the unlikely long-time girlfriend of Frank.) The same year, William H. Macy snagged the coveted Screen Actors Guild Award for his searing portrayal of a captivating monster. But all the actors inhabit their quirky characters with amazing authenticity. This is a fearless ensemble not afraid of going to the extreme. If I were to single out a performance, I would go with Emmy Rossum. Enormously charismatic, multi-layered and lovable, her Fiona seems destined for an easier life — yet she’s no saint. Complicating matters even further, her “relationship picker” is busted which ends up causing loads of heartbreak. Her flawed humanity is relatable; her valor, undeniable. She is the focal point around which all the pandemonium churns — a worthy and unforgettable hero.

I confess, at this point, that I’ve signed on for the entire run of Shameless, for however long it lasts. The Gallaghers fight for their survival, bounce back from disaster, love fiercely and never lose their individuality. They adapt, they persevere, and they live their crazy lives to the fullest. They have gotten under my skin for all time.

0 comments on ““Shameless”: Why It’s Not Too Late to Join the Madness”